For many North American restaurant-goers, a 15 to 20 per cent tip is standard for any dining experience. Now, a new social media trend called #TipTheBillChallenge encourages people to tip 100 per cent of their food cost.

While it started in March, it only went viral this month when an American named George Hope posted a receipt of his restaurant bill. His tip of $46.44 matched his food costs for a total of $92.88. He said he wanted to draw attention to the importance of tipping.

“I’ve gotten messages from a cook in Italy saying he used to work in the front of the house and he appreciated my challenge,” Hope told a local CBS affiliate earlier this month. “Some of these servers that are waiting on you are making two bucks an hour and your tip really matters.”

It matters to Edmonton chef Daniel Huber too. That’s why he says he wants to make tipping fairer in Alberta by eliminating the practice of house tipping—when business owners take a percentage of the servers’ tips.

“What we’re doing is soliciting testimonials from service workers; not just in restaurants, but hotels, hair stylists—essentially anybody that receives a tip or any kind of gratuity,” said Huber in an interview with CBC’s Radio Active.

Huber says house tipping has been on the rise since the province increased the minimum wage a few years ago. As owners need to pay higher wages, some have started taking a percentage of tips to help offset the increase.

Spotlight on labour laws and wages

Emily Norgang, a senior researcher at the Canadian Labour Congress, supports the #TipTheBillChallenge. She says it’s drawing attention to the more significant questions we need to be asking, especially at a time when the service sector in Canada is growing.

Emily Norgang is a senior researcher at the Canadian Labour Congress. (Chantal St-Denis)

But when it comes to tipping, she says there are still a lot of unwritten rules that cause problems.

“Culturally, we’re a long ways away from [eliminating tipping] in Canada. [But] it is a direction that we should be headed because we should be paying a fair wage,” she said.

Shifting cultural expectations could be responsible for the popularity of the #TipTheBillChallenge, but Norgang sees it as a short-term trend with long-term goals.

“Tipping one hundred per cent [isn’t] sustainable [and shouldn’t] be the expectation on consumers by any means,” said Norgang. “That is really a tactic to draw attention to the broader problem of low wages.”

Culturally, we’re most accustomed to leaving tips for table service at restaurants. But even that’s changing, as more of us pay for things electronically and can automatically add tips for even the smallest transactions.

While it’s hard to pin down precisely how much Canadians leave in tips, digital payment processor Square released their 2018 Tipping Trends report, which found the average across all businesses was 13.8 per cent. The highest tipping levels were in salons at an average of 15.4 per cent. 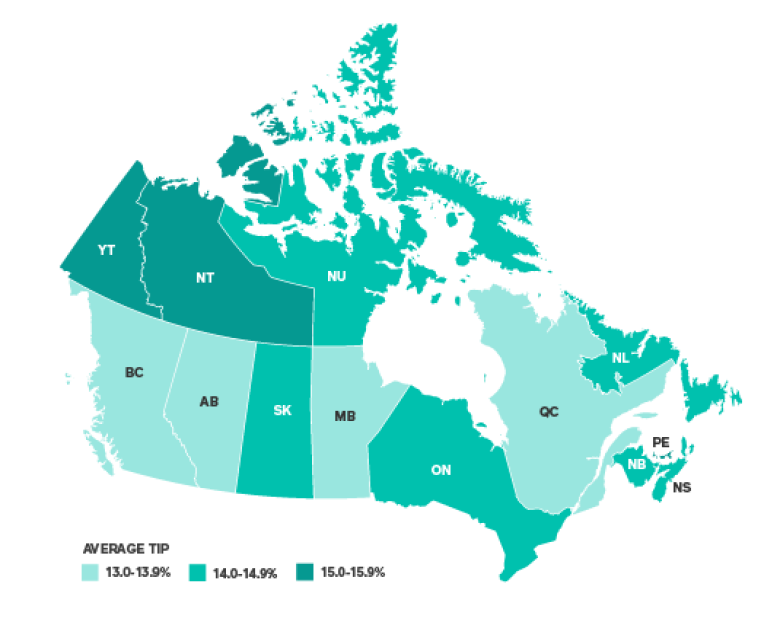 Square’s 2018 Tipping Trends report found that the average tip across all locations and business types using Square in Canada is 13.8 per cent. This varies from the highest amount of 15.8 percent in Regina to the lowest tippers in Vancouver at 12.8 per cent. (Square)

Most surprisingly, in the category of “Quick Service Restaurants”—essentially, fast food-style dining with no table service—the average was 11.9 per cent.

The data is based on over two million transactions across Square sellers in Canada who have the tipping feature enabled between February and May 2018.