Two Sask. First Nations chiefs have announced their support for the Enbridge Line 3 pipeline, saying they see economic and employment opportunities for their people.

A tour of the pipeline construction site was held near White City, Sask. on Monday.

The controversial project replaces just over 1,000 kilometres of existing pipe running from Hardisty, Alta., to the U.S. border near Gretna, Man., carrying crude oil to refineries in the United States.

On Monday, the company held a site tour for Indigenous leaders and politicians, including federal Public Safety and Emergency Preparedness Minister Ralph Goodale, and Sask. Minister of Energy and Resources Bronwyn Eyre.

‘I wish I could wait for the government to honour treaty’

Kahkewistahaw First Nation Chief Evan Taypotat said in a speech at the tour he is supporting the pipeline because it will bring employment to members of his First Nation.

He said he was raised by a chief who opposed the pipeline.

“There might be backlash from my people standing here today,” he said.

“That’s the reality of it. I wish I could wait for the government to honour treaty, to help my people grow and prosper, but if I did that I’m pretty sure I’d be waiting into my next lifetime and the next.”

Kahkewistahaw First Nation Chief Evan Taypotat says he is supporting the pipeline to secure employment and training for his community. (CBC Radio-Canada)

Taypotat said about 20 people from his band will be working on the pipeline, including some that were previously out of work.

He said the decision to support the pipeline puts Kahkewistahaw “in front of” business instead of standing off to the side.

“For the last 150 years our natural resources have been taken and we have no compensation,” said Taypotat.

He said his First Nation will continue to endorse the pipeline, adding that Enbridge must honour strict environmental regulations.

But he said Pasqua and Enbridge developed an action plan to protect certain areas. Those locations were determined through ceremonies, inspections and consultation with elders.

“There are certain sites in spread four that the construction does not go towards because we have identified those as sacred areas,” said Peigan.

“Areas that cannot be interrupted.” 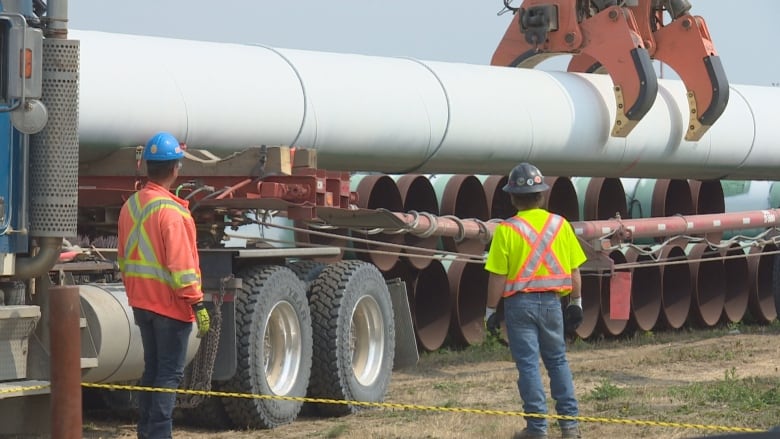 He said training and employment will be among the benefits for his First Nation.

In Saskatchewan, the company estimates the pipeline will create about 9,175 direct, indirect and induced jobs, and generate $1.0654 billion in GDP and $183.9 million in taxes.

Goodale welcomed the project at what he called “a time of considerable global uncertainty.”

“This huge, private sector investment in vital energy transportation infrastructure adds to our capacity to move our resources in the safest possible way,” he said.