Erinn Monture, a Mohawk of the Six Nations of the Grand River is using her experience battling cancer to help other Indigenous people affected by the disease.

Monture  has founded a cancer awareness and resource centre called, Edwadadrihwanokwa:k, which is Cayuga means “We give each other help every day.”

The goal of the not-for-profit centre is to help bridge the gap between mainstream healthcare and First Nations health centres.

The centre helps in a variety of ways, including providing vital information to cancer patients about the process specific to a First Nations community, to providing people with products and supplies to help with the financial cost of cancer.

Monture, 50, says she knew something was wrong with her health and fought for nine months to get a diagnoses, which came in December 2015 when she was diagnosed with stage 3C Ovarian cancer.

After I was diagnosed, I just kept being proactive and started to advocate for other patients.– Erinn Monture

After chemotherapy, Monture was in remission until the cancer came back 10 months later. She once again was treated with chemotherapy and continues to receive treatment.

An advocate for others

She says it inspired her to become an advocate to fight for others.

“After I was diagnosed, I just kept being proactive and started to advocate for other patients,” said Monture. “After fighting all that time for myself, it more became about fighting for other people.”

Monture says people on Six Nations, south west of Hamilton, would approach her with questions about the process starting with a cancer diagnoses itself, how to prepare for treatment and specific resources.

Last year she wrote a book to help answer those questions.

Erinn Monture wrote a book called “An Indigenous Guide To Your Cancer Journey.” The book is customized for specific Indigenous communities and cultures, providing resources and guidance for those dealing with cancer. (Laura Clementson/CBC)

It’s called The Haudenosaunee Guide to Your Cancer Journey. The goal of the guide is to assist recently diagnosed Indigenous cancer patients, families and caregivers who are band members of Six Nations on the Grand River Territory.

“It just became just any every day occurrence where I became that person to contact,” said Monture.

Since launching the project, other First Nations have expressed an interest and Monture has put together a second book called “An Indigenous Guide To Your Cancer Journey.” Six of the 13 chapters are customized for specific Indigenous communities and cultures.

The book provides a description of services available within a particular territory that are delivered by health services departments and regional cancer treatment centres.

“There’s language barriers, there’s a lack of knowledge, the fear of having to come to mainstream [care] and get treatment to begin with is all crazy right?”

I feel good by helping to give back. It takes my mind off of me fighting my battle every day and looking after other people.– Erinn Monture,

“If we can make that better today, that’s what I’m trying to do,” said Monture.

Along with the guides, Monture has also created “ChemoBags.”

Erinn Monture shows a few of the items that can be found within the ChemoBags that she gives to newly diagnosed First Nations cancer patients throughout Canada and the U.S. <a href=”https://t.co/ADT9plDwDq”>pic.twitter.com/ADT9plDwDq</a>

The bags contain over $800 worth of hygiene products, nutrition supplements and other items that may help someone.

The items have either been donated or made available at a reduced cost by the centre’s sponsors and are given to First Nations patients throughout Canada and the U.S. for free.

“People don’t expect it, but it’s something to help them because the cost of cancer is so high,” said Monture.

‘I feel good by helping to give back’

Monture says helping others has in turn helped her emotionally.

“I feel good by helping to give back. It takes my mind off of me fighting my battle every day and looking after other people.”

Monture says she’s always working, which she can do from her living room.

“I don’t know what I’d do without it. It became my life. Every day I would wake up and say, I’m going to go do something,” said Monture. “I absolutely love what I do.

“I’m not laying on my couch and dying.” 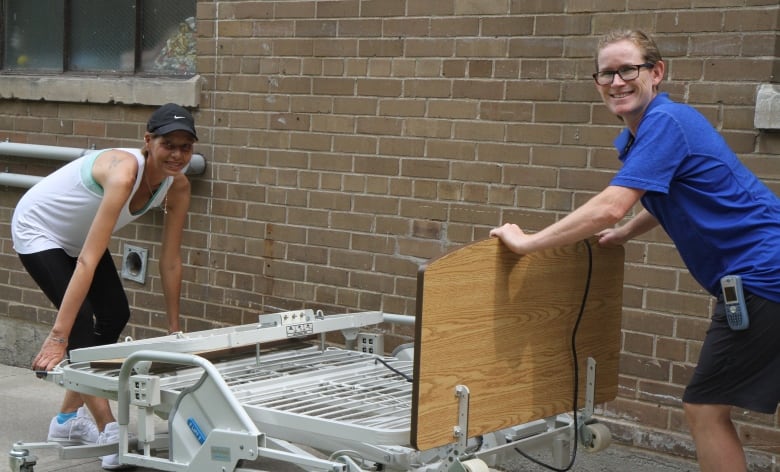 On Monday Erinn Monture was picking up 20 hospital beds from St. Joseph’s Lifecare Centre in Brantford that were donated to her to give to others. Monture and Donna Douglas from St. Joe’s moves the beds. (Laura Clementson/CBC)

On Monday Monture was picking up 20 hospital beds from St. Joseph’s Lifecare Centre in Brantford that she’s going to give to people who may need them at their home. She says the hospital approached about whether other First Nations people could use them.

Donna Douglas, restorative coach and quality and St. Joe’s said the hospital was getting 20 new beds and wanted the old beds that are still in good condition be put to use.

“We were fortunate enough to get a hold of Erinn from the cancer society and she’s taking them all so we’re so happy for that because we didn’t want to have to throw them in the garbage,” said Douglas.