It’s been a summer of dramatic killer whale news — from a mother holding up her dead calf for 17 days in a gut-wrenching display of grief, to a boatload of scientists shooting a sick whale with a dart full of antibiotics.

Now, B.C.’s ailing southern resident killer whale population is proving itself a wedge in one of the most headline-grabbing issues in the province.

In the 200-page decision released by the Federal Court of Appeal Thursday morning, effectively quashing the government’s approvals to build the Trans Mountain expansion project, B.C.’s southern resident killer whales are mentioned no fewer than 57 times.

The court ruled that the National Energy Board (NEB) review failed to assess the impacts of marine shipping — saying it was so flawed, it should not have been relied on by the federal cabinet when it gave final approval to proceed in November 2016.

Activists, lawyers and academics say the decision demonstrates environmental corners cannot be cut when governments seek social license for major infrastructure projects — especially in a case where increased tanker traffic and vessel noise are known to be key threats to killer whales.

“It’s very clear from this decision that environmental assessment considerations and Species At Risk Act decisions aren’t optional, and they need to be taken seriously,” said Dyna Tuytel, a lawyer with Ecojustice, who represented conservation groups that filed a court challenge to the federal government’s approval for a pipeline expansion.

“There’s a risk in taking shortcuts,” said Eric Taylor, a professor of zoology at the University of B.C., and the chair of the Committee on the Status of Endangered Wildlife in Canada.

“It’s going to come back and bite you, as it’s done here.”

Narrow reading of the law

According to the ruling, the shortcut, or “critical error” made by the NEB, was to define the scope of the project as only the pipeline and the marine terminal for the purposes of its environmental assessment.

So although the project looked at marine shipping during the review, it did not assess it to environmental standards, nor did it apply the Species At Risk Act to the effects of marine shipping on endangered species.

B.C.’s southern resident killer whales are considered at risk because of their small population, low reproductive rate and threats including marine traffic and lack of food. (Dave Ellifrit/Center for Whale Research)

Taylor called the decision to leave out the project-related tanker traffic in the review “unfathomable.”

“The oil is not going to sit there in barrels, it’s got to move out by ships. And ship traffic has clearly been identified as a threat to this endangered species. So it’s unconscionable that they ignored it,” he said.

Tuytel called the ruling “fairly unusual.” But Taylor said wasn’t surprised, given the threats to southern resident killer whales have been clear for over a decade.

“I think the court really had no other choice than to do this,” he said.

The whales, which are also threatened due to toxic contamination levels and low supplies of Chinook salmon, are designated under the Species At Risk Act, which means federal prohibitions exist against anything that would harm them or habitat considered critical to their survival.

In June, the federal Department of Fisheries and Oceans pledged measures to slow down vessel traffic, noting the population was facing an imminent threat to survival. 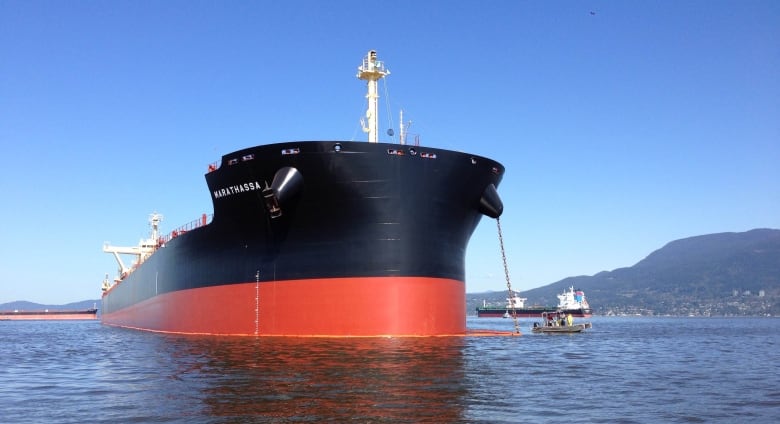 Fuel spills and underwater noise from tankers are just some of the threats that have endangered the southern resident killer whale population. (Michael Mcarthur/CBC)

Since the time the NEB reviewed the project, B.C.’s southern resident population has declined from about 82 to 75.

The project would increase capacity from five ships a month through Burrard Inlet to a maximum of 34 oil tankers capable of carrying 120,000 tonnes of diluted bitumen at a time.

Killer whales a ‘flare’ for other issues

This is not the first time whales have played a role in halting a major Canadian infrastructure project.

Last year, energy giant TransCanada scrapped plans for a port for its proposed Energy East pipeline after protesters raised alarms about impacts on the calving grounds of the vulnerable beluga population in the St. Lawrence Estuary.

Taylor said the pipeline and its associated infrastructure are likely to have impacts on many species, but because of the popularity of killer whales, they tend to act as a “flare” for many of the issues associated with the project.

“If this was a lichen, many, many fewer people would be paying attention,” he said.