Flights at several airports in B.C.’s Interior and West Kootenay regions have been cancelled or delayed Sunday as wildfire smoke continues to choke the province.

“To be honest with you, I’ve personally never seen it this bad,” he said. “You look out the window here in Kelowna​ … It’s like we’re in a fog.”

In a statement Sunday, Air Canada said its flights to and from the Interior could continue to be affected due to smoke and visibility.

Those with travel plans are advised to check the flight information page on their airport’s official website or social media channels.

A wildfire burning near Zeballos B.C., on the west coast of Vancouver Island, has resulted in evacuation orders for residents. (CHEK News)

Andrea Purcell arrived in Vancouver from Toronto on Sunday at 2 p.m. PT only to discover her Air Canada flight to Castlegar was cancelled due to smoke.

She is spending the night in Vancouver and will drive to Castlegar on Monday, but says she wishes the airline did more to help her.

“I would have stayed in Toronto longer had I known,” she said.

Majority of B.C. under ‘special statement’

Environment Canada said much of the province is under a special weather statement because of smoke. Only the far north and part of the western coast are clear.

Air quality in Castlegar, Kamloops, Prince George, Quesnel, Whistler and Williams Lake was set at a “very high” health-risk rating of 10 or higher on Sunday.

The Okanagan, eastern Fraser Valley and Metro Vancouver regions had the same rating.

The elderly, children and people with pre-existing health conditions in those areas should stay inside.

The conditions forced some people to change their plans, such as not spending the weekend outdoors or cutting camping trips short.

That’s what Anita Sparrow and her family did at Golden Ears Provincial Park east of Vancouver on Sunday.

“It’s supposed to be 33 C, clear skies,” she said about the cool temperatures due to hazy conditions. 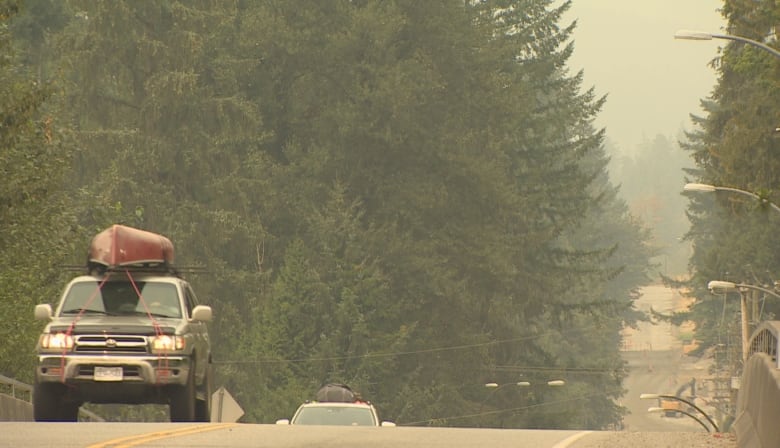 Smokey conditions have caused many people across B.C. to change their holiday and camping plans. (CBC)

She says the conditions made her feel like she had a cold. One of her children has been having to use a inhaler.

Still, she says it could be worse, considering the South Coast is mostly just suffering from smoke and not flames.

“We’re lucky here, so even for us to say, ‘Oh it ruined our vacation,’ well it’s ruining peoples’ homes, it’s ruining wildlife, it’s ruining full communities, so I feel blessed living in this part of B.C.” 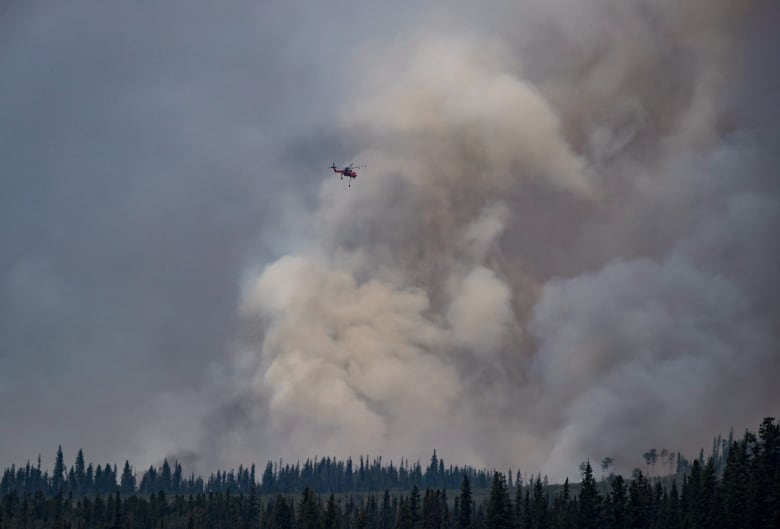 A helicopter being used to fight a smaller fire nearby flies past a large plume of smoke rising from a wildfire near Fraser Lake, B.C., on Wednesday August 15, 2018. The British Columbia government has declared a provincial state of emergency to support the response to the more than 500 wildfires burning across the province. THE CANADIAN PRESS/Darryl Dyck (THE CANADIAN PRESS)

Environment Canada meteorologist Allan Coldwells said smoke “is going to be an issue for the next five days,” compounded by even more smoke that has floated north from wildfires in Washington state.

The status of the wildfires across the province has largely held over the weekend.

On Sunday, fire information officer Kyla Fraser said the corridor between Smithers and Prince George is still the biggest area of concern given the size and intensity of the fires there. 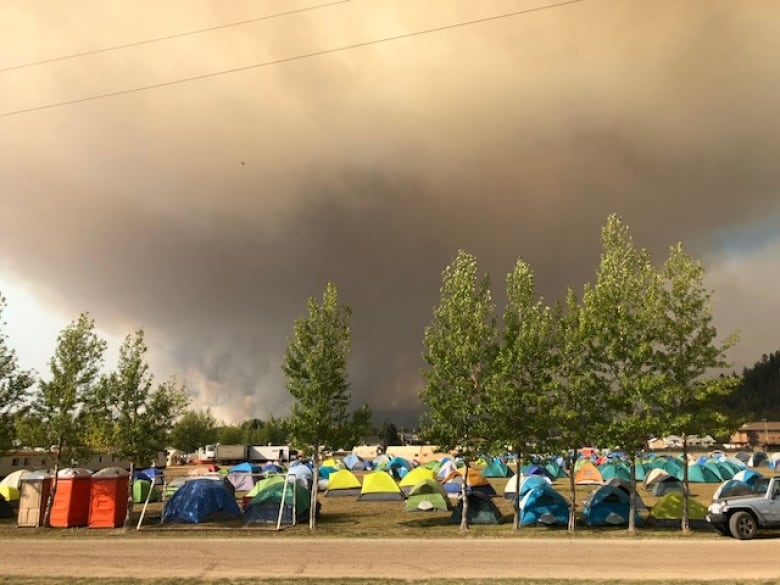 Firefighters have set up their tents in Fraser Lake as they continue to fight the nearby Shovel Lake wildfire. (Albert Gerow)

In the southeast corner of the province, thousands of people in Kimberley are still on evacuation alert.

There are apocalyptic scenes inside B.C. wildfire zones, as heavy smoke has turned day into night and forced people who haven’t relocated to stay in their homes. 5:34

With files from Anis Heydari, Allison Dempster, Zahra Premji and The Canadian Press