Paradigm Hyperloop may have finished second at last year’s international SpaceX competition, making history and gaining international attention, but the team’s application for the 2018 race — taking place in California this weekend — was rejected.

“It was very demotivating,” said Jack Chapman, Canadian lead for the Paradigm team.

Underneath the shell of the pod Paradigm raced in 2017. It now sits on display in the engineering building at MUN. (Eddy Kennedy/CBC)

“But it also was a bit inspirational,” he added. “It gave us the opportunity to step back and look at what we value with this project.”

The SpaceX competition was created to foster student innovation and advance Hyperloop technology — a potential future mode of transportation.

Hyperloop works by reducing friction. Pods, which would carry humans or cargo, are levitated inside a vacuum tube where they face less resistance and can reach greater speeds.

As the sun sets, we take home the 2nd place prize for speed, however, history has been made this day by proving the air bearing concept🇨🇦🇺🇸 <a href=”https://t.co/l2FaztcqEG”>pic.twitter.com/l2FaztcqEG</a>

At SpaceX, student teams from around the world race pods they’ve designed and built themselves.

The joint North American team made up of engineering students from Memorial University and Northeastern University in Boston was the first group to ever run an air-bearing model, meaning they levitated their pod by pushing air from the bottom — something that was was previously only an idea.

Proving that concept got the team noticed.

More than 500 people signed up to join Paradigm Hyperloop that fall.

“Putting these new members in places where they fit the best and where they would gain the most experience and have the best time, was a bit of a challenge for us,” Chapman said. 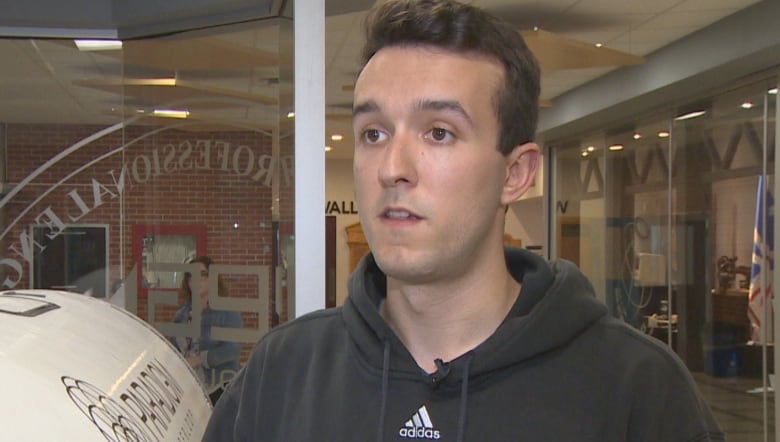 Jack Chapman says it was demotivating not to qualify for this year’s SpaceX competition. (Eddy Kennedy/CBC)

Eventually, people started dropping out. Plus, a lot of the more senior members, who helped shape the winning team in 2017, graduated and were no longer eligible to participate in the student competition.

“We submitted our big, final design project to SpaceX and unfortunately that was not well received … They weren’t impressed,” Chapman said.

“They pointed out a few technical flaws that we were aware of but we hadn’t gotten to the point of competing by the time we submitted that document.” Paradigm Hyperloop is working on a new pod now that they plan to make smaller and lighter. (Eddy Kennedy/CBC)

The rejection knocked the team back even further. By February, Chapman said only five or six people were left and not many of them had the experience they needed.

Despite that, they started recruiting and pulling back former members — assigning people in areas they were most interested in.

Paradigm now has about 30 dedicated members — a team similar in size to the one that took second place last year. 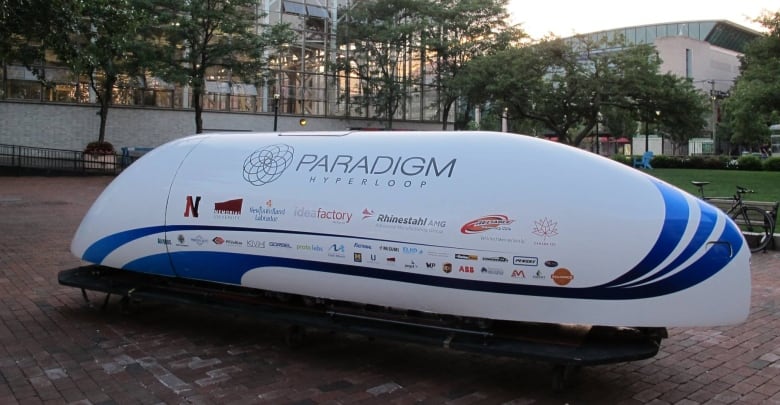 “We’re currently redesigning our pod … we’re basically looking to optimize it and keep running with the current theories and current methods that we have already proven but optimize that and make it better,” said Kieran Buckingham, Paradigm Hyperloop’s mechanical design lead.

The pod Paradigm raced last year weighed 2,000 pounds and measured 18 feet long. The team is designing a new one now that’s half the length and a third of the weight.

Members are hoping to race it in 2019 at a SpaceX competition that has not yet been announced.

Paradigm Hyperloop, as a team, isn’t enrolled in this weekend’s competition, but Chapman and a few others are heading to the California test track anyway to check out the competition and ensure Paradigm isn’t forgotten.

“For us to have our face there and show that we’re still fighting and we’re still trying to develop this technology as students is very important to us,” Chapman said. 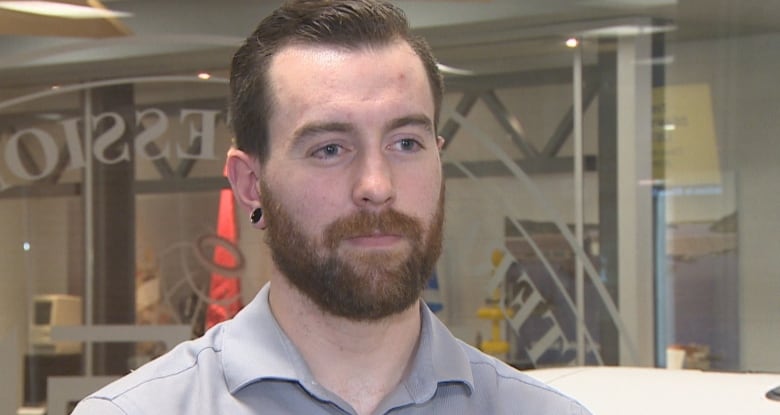 Kieran Buckingham says the team plans to make itself known at this year’s competition, and hopes to qualify again next year. (Eddy Kennedy/CBC)

“The teams from Europe, a lot of them have students who take a full year off and some of them, we’ve been told, are even paid to develop this project,” he said.

The Memorial and Northeastern University team isn’t hand picked — it’s all extracurricular. Students volunteer their time and seek out sponsorships.

But getting back to California despite that disadvantage is the team’s goal.

“There’s so much work and so much time that gets put into this,” Buckingham said.

“To actually get down there and have the opportunity to go in the tube and prove that we are capable with such a small but dedicated crew, I think it would probably be the best feeling in the world.”