Rescue teams in northern Thailand were giving crash courses in swimming and diving Wednesday as part of preparations to extract a young soccer squad trapped in a cave and keen to end a harrowing 11-day ordeal.

A team of divers, medics, counsellors and Thai navy SEALS were with the 12 boys and their 25-year-old coach, providing medicine and food while experts assessed conditions for getting them out — a task the government said would not be easy.

“Now we are teaching the children to swim and dive,” he said, adding that if water levels fell and the flow weakened, they would be taken out quickly.

A relative of one of the missing boys talks on the phone on Wednesday near the Tham Luang cave complex. (Soe Zeya Tun/Retuers)

A video released by the SEALS on Wednesday showed two rescuers in wetsuits sitting on a elevated part of the cave beside the boys, who are wrapped in emergency foil blankets. They appeared to be in good spirits, occasionally laughing. It was not immediately clear when the footage was taken.

A flashlight is shone on each boy, who, one by one, say hello and introduce themselves with head bowed and hands clasped together in a traditional “wai” Thai greeting.

Divers found the boys, coach about two kilometres inside the labyrinth-like system of caves 0:59

A young player in the foreground wears what appears to be the red England soccer jersey. Another younger boy wears the blue shirt of English team Chelsea.

They were discovered by the SEALS and two British cave diving experts on Monday, having been incommunicado and in darkness since June 23, when a group outing at the caves ultimately led to a high-profile search and rescue effort.

News that the “Wild Boar” team had survived sparked celebrations and relief in a country transfixed by the drama, with almost blanket media coverage.

The rescue teams and volunteers were hailed as heroes in an outpouring of joy and relief on social media, and applauded by the country’s prime minister, Prayuth Chan-ocha. 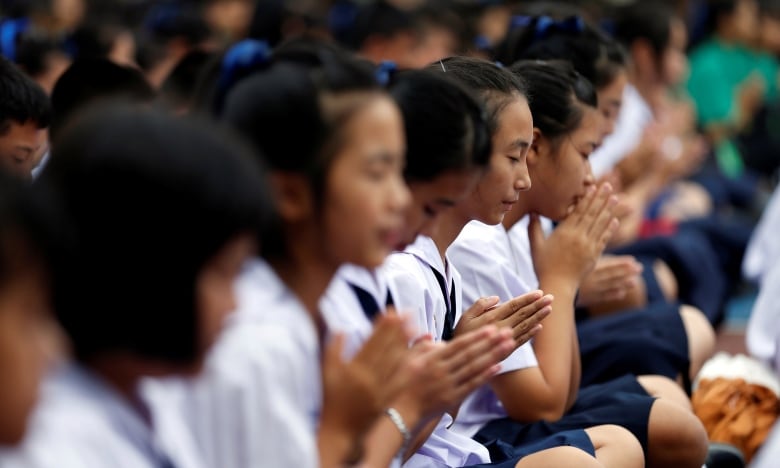 Efforts to open a communications line between the trapped team located about four kilometres from the mouth of the cave suffered a setback after equipment fell into the water, Chiang Rai Gov. Narongsak Osottanakorn said Wednesday.

The authorities were keen to get the boys out as soon as possible — but not if it was unsafe.

“All 13 don’t have to come out at the same time; who is ready first can go first,” he told reporters. “If there are risks, then we will not be extracting them.” 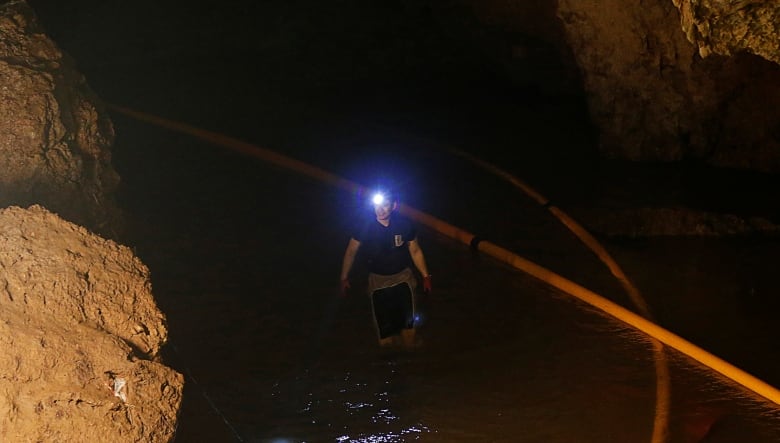 A diver walks in Tham Luang cave complex as rescuers searched for members of the team and their coach on Sunday. (Soe Zeya Tun/Reuters)

The focus is now on monitoring water levels, rain forecasts and extraction procedures. As of late Tuesday, some 120 million litres of water had been pumped out of the cave.

Officials on Tuesday dismissed as speculation reports that the boys could be trapped for up to four months, but supplies have been prepared for that period of time.