With rattled world capitals watching, U.S. President Donald Trump and Russia’s Vladimir Putin are ready to go one-on-one in a summit that plays out against a backdrop of fraying Western alliances, a new peak in the investigation into Russian election meddling and fears that Moscow’s aggression may go unpunished.

Monday’s meeting was condemned in advance by an assortment of members of Congress from both parties after the U.S. indictment last week of 12 Russian military intelligence officers accused of hacking Democrats in the 2016 election to help Trump’s presidential campaign. Undeterred, the American president is set to go face-to-face with Putin, the authoritarian leader for whom he has expressed admiration. The meeting comes as questions swirl about whether Trump will sharply and publicly rebuke his Russian counterpart for the election meddling that prompting a special counsel probe that Trump has repeatedly labelled a witch hunt.

While Trump was eager for a made-for-TV spectacle that will dominate headlines like his sit-down with North Korean leader Kim Jong-un last month, the Kremlin’s primary mission was simply the occurrence of the summit. Putin hopes the meeting, mere hours after he presided over the World Cup finals, will help him forge good personal ties with Trump and focus on areas where Moscow and Washington could find common ground, such as Syria.

The two leaders first meet one-on-one in the Finnish presidential palace’s opulent Gothic Hall, then continue their discussions with an expanded group of aides and over lunch in the Hall of Mirrors, once the emperor’s throne room. The leaders will then take questions at a news conference before going their separate ways.

‘The European Union is a foe’

Putin will likely not be shooting for official recognition of Russia’s 2014 annexation of Crimea or easing of the crippling U.S. sanctions, aware that the U.S. Congress would never allow such action. But he would welcome a symbolic end to Western protests over Crimea and Moscow’s attempts to destabilize elections and traditional Western alliances and norms.

Trump unleashed his own attacks on those very institutions before arriving in Finland.

Trump chats with Putin as they attend the APEC Economic Leaders’ Meeting in 2017. Hovering over Helsinki is the spectre of the 2016 election interference and ongoing special counsel Robert Mueller’s investigation into possible collusion between Trump campaign officials and Russia. (Mikhail Klimentyev/AFP/Getty Images)

In an interview with CBS that aired Sunday, Trump described the European Union, a bloc of nations that includes many of America’s closest allies, as a “foe.”

“I think the European Union is a foe, what they do to us in trade,” Trump said.

‘Indeed the enemy of the people’

That attack on the alliance came on the heels of Trump’s jarring appearance at a NATO summit in Brussels, where he harshly criticized traditional allies over “delinquent” defence spending only to later confirm his commitment to the military alliance that has long been a bulwark against Russian aggression.

And on the eve of his meeting with Putin, who has cracked down on the free press, Trump unleashed a series of attacks on the media as Air Force One descended into Helsinki, complaining that Democrats and the press were unlikely to give him credit for any summit accomplishments.

“Unfortunately, no matter how well I do at the Summit, if I was given the great city of Moscow as retribution for all of the sins and evils committed by Russia over the years, I would return to criticism that it wasn’t good enough — that I should have gotten Saint Petersburg in addition!” Trump tweeted. “Much of our news media is indeed the enemy of the people and all the Dems know how to do is resist and obstruct!”

In his next tweet, he congratulated Putin on hosting “one of the best ever” World Cup tournaments.

“Russia has done nothing to deserve us meeting them in this way,” said Nina Jankowicz, a global fellow at the Wilson Center’s Kennan Institute who specializes in Russia, Ukraine and disinformation. For Putin, she added, “not only is this a PR coup no matter what happens, Trump could say nothing and it would help to legitimize his regime.”

‘There won’t be a Perry Mason here’

Hovering over Helsinki is the spectre of the 2016 election interference and ongoing special counsel Robert Mueller’s investigation into possible collusion between Trump campaign officials and Russia.

Trump said in Britain last week — another chaotic stop on his European tour — that he would raise the issue of election meddling with Putin even as he played down its impact. 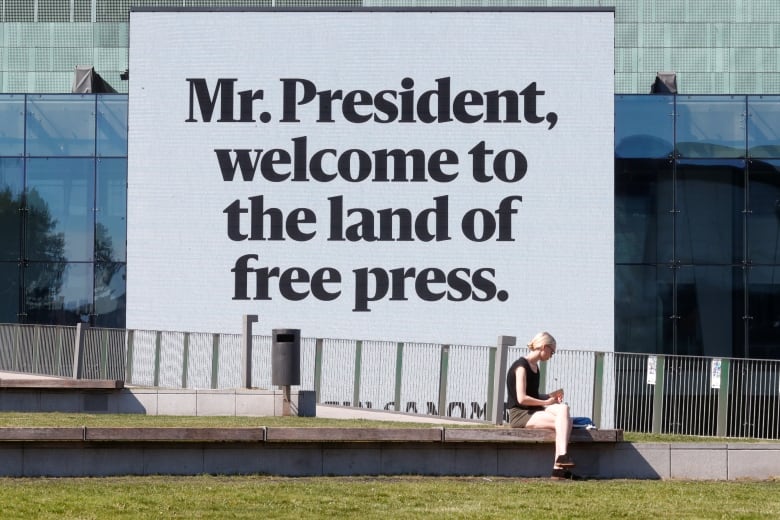 A message supporting the free press is displayed on a video wall at the Helsinki Music Centre. (Ints Kalnins/Reuters)

“I don’t think you’ll have any `Gee, I did it. I did it. You got me,”‘ said Trump, invoking a television detective. “There won’t be a Perry Mason here, I don’t think. But you never know what happens, right? But I will absolutely firmly ask the question.”

Trump also said in the CBS interview that he had given no thought to asking Putin to extradite the dozen Russian military intelligence officers indicted this past week in on charges related to the hacking of Democratic targets.

But after being asked about that by his interviewer, Trump said “certainly I’ll be asking about it” although extradition is highly unlikely. The U.S. doesn’t have an extradition treaty with Moscow and can’t force the Russians to hand over citizens. Russia’s constitution also prohibits turning over citizens to foreign governments.

Putin is likely to strongly reaffirm his denial of any meddling and cast the U.S. charges as unfounded.

The Russian Foreign Ministry rejected last week’s indictment as part of a “shameful comedy” staged by those in the U.S. who try to prevent the normalization of Russia-U.S. ties, arguing that it doesn’t contain evidence to back the accusations.

On Syria, a possible deal could see Moscow helping mediate the withdrawal of Iranian forces and their Hezbollah proxies from the areas alongside Syria’s border with Israel — a diplomatic coup that would reflect Russia’s carefully cultivated ties with both Israel and Iran.

While both Putin and Trump spoke about the need to discuss arms control issues, they are unlikely to make any quick deals. They may underline the importance of continuing the discussions, setting the stage for discussions on expert level.