Donna Wilson was surprised that the people who moved debris from a plane crash that killed her father were the same people tasked with protecting it.

The Alberta government has issued an apology to Wilson and the families of two other men who died in a plane crash on Nov. 22, 1953 just north of Whitecourt, after removing much of the debris at the memorial site.

The wreckage had protection status under the Alberta government.

Wilson visited the site last year. When she heard much of the debris was gone, she thought people went in and hauled the plane parts away for scrap metal.

The government admitted responsibility last week, which left her with “mixed emotions,” she said Monday.

“On the one hand, we felt better that someone wasn’t profiting off of it,” Wilson said. “On the other hand, when a site is protected under government protection order, you expect the government to protect it.”

Three men died in the plane crash: Pilot Gordon MacDonald, Dr. Donald Wilson and polio patient Lloyd Williams. They were flying to Edmonton in inclement weather but never made it to the city.

Wilson, who is Williams’s daughter, said the government told the families last week that some workers hauled off the debris without knowing it had a government protection order on it.

In an emailed statement, Agriculture and Forestry Minister Oneil Carlier said the workers were unaware of the site’s significance to the families.

The government says much of the wreckage pulled from the site is ‘unrecoverable.’ (Donna Wilson/Supplied)

“The families are right, this shouldn’t have happened without consulting them,” said Carlier, the MLA for Whitecourt-Ste. Anne.

“On behalf of the Government of Alberta staff that removed the wreckage, I offer my sincere apology for any distress this might have caused. My heart goes out to them, and I understand how this would have impacted them.”

The government had issued a protective notation on a nearby memorial, but not on the wreckage itself. Crews cleaned up the debris for safety reasons because there’s been an increase in public use of the area.

Carlier said he will be contacting the families to see how the government can make things right.

But since last week, except for an email from Premier Rachel Notley saying the government will investigate, Wilson said she hasn’t heard anything from the province.

Gandia also said he was told the wreckage is now “unrecoverable” but the memorial is still there. 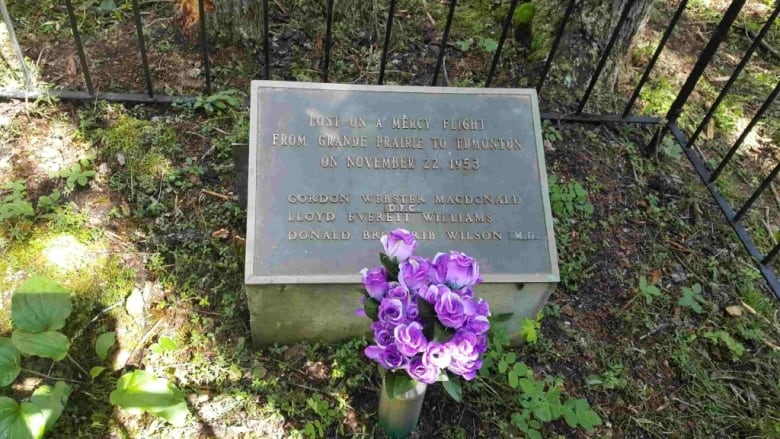 The government says the memorial was in the protective notation, but not the wreckage. (Donna Wilson/Supplied)

Wilson said returning some of the wreckage would have been the best way to right the government’s wrongs.

“Our fathers lay amongst that wreckage for nine months until the plane was found,” she said. “Their ashes were spread over that wreckage, so to have some of that returned would give us some sense of peace, I think.”

But if the wreckage can’t be returned, Wilson said a formal apology would be a start.

“It’s tough to unscramble an egg but formal letters of apology from the government to each of the families, I think, would be appropriate,” she said.

Another suggestion from one of the other family members was to build a memorial — either at the spot of the crash or elsewhere — that represented both the 1953 crash and everyone who flies in medical emergencies.

“There are a lot of medical evacuation emergency flights,” Wilson said. “They risk a lot, often because it is a matter of life and death.”