The principal at Youngstown Elementary School kissed the school year goodbye on Thursday.

Students at the K-6 school honoured their end of an unusual bargain by reaching a combined goal of 40,000 nights of reading during the year.

So Principal Jason Dolezal had to keep his promise, which he did by laying a couple of kisses on a miniature goat.

The sun shone on the last day of school as the goat arrived for perhaps the most-anticipated public smooch since the royal wedding.

Students could barely keep still as they sat on the pavement, rapturous in anticipation.

Students at Youngstown Elementary School wait expectantly for the big kiss between a goat and their principal.

He then slapped on some lipstick — his wife’s idea, he said — and laid kisses on the billy goat.

“I was like, he’s actually doing this?” said Grade 6 student Puneet Sohi, who read the popular Diary of a Wimpy Kid series to contribute to the goal. “When he kissed it on the lips, I was like — holy. So, then, yeah, it was pretty cool and funny.”

While  students were likely fixated on summer plans and goat kisses, Dolezal said his promise was an extra bit of motivation to get students reading.

“We want to make sure that we set that good, firm foundation for you for reading,” he told the students. “And I’m going to encourage you to read more over the summer.”

The students spent the rest of the day visiting the object of the principal’s affections at a pop-up petting zoo in the school yard.

No further smooches were reported. 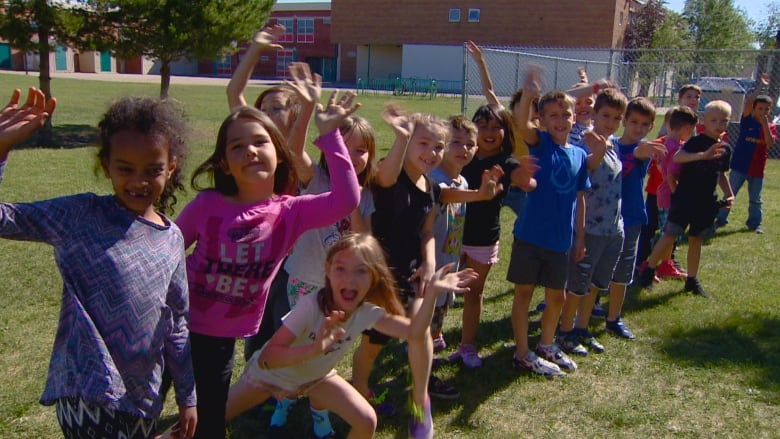 Students at Youngstown Elementary School wait for their turn at the pop-up petting zoo on the last day of school.