Canadians in major urban areas are largely in favour of separated bike lanes, a new poll suggests, but that doesn’t mean they want those lanes built where they live.

How you feel about about bike lanes — whether there are too many or not enough, if they should be separated, and who’s to blame in cyclist/driver conflict all heavily depend on where you live, how you commute and how old you are, suggests the new public opinion poll by the Angus Reid Institute.

“Cities in this country are undergoing as profound a change in terms of how different modes of transportation share the road as we’ve seen in 100 years — probably since between the time people who were driving horses with buggies were sharing the road with nascent drivers in these newfangled things called cars,” said Shachi Kurl, the executive director of the institute.

The poll surveyed 5,423 people from metro centres across the country in March. The group was a randomized sample of adults who are members of the Angus Reid Forum.

In Canada, according to the poll, bicycling is the third-most popular way to get from A to B. The poll found seven per cent of Canadians surveyed opted to bicycle multiple times a week, while 16 per cent chose transit and 78 per cent drive.

Despite the relatively small numbers of cyclists, city planners have long been put an emphasis on infrastructure that encourages more bicycle traffic. And the poll suggests broad support for separated bike lanes: sixty-five per cent of respondents said they are a good thing, while only 17 per cent said separated lanes were outright bad.

However, whether people want to see more bike lanes built is another matter.

Canadians on the western side of the country were considerably more likely to hold the view that there are already too many bike lanes in their city. More than 30 per cent of city-dwellers in Vancouver, Edmonton and Calgary said their cities had “too many” separated lanes for cyclists.

Alberta in particular is slow to warm to bike lanes — Calgary and Edmonton were the only two of eight metro centres surveyed (Vancouver, Edmonton, Calgary, Winnipeg, southern Ontario, Toronto, Montreal and Halifax) where fewer than half the respondents said separated bike lanes were a good thing.

More than half the people polled in Winnipeg (66 per cent) and Halifax (58 per cent) said there were far too few separated bike lanes in their cities. Only 12 per cent of people in Vancouver and 15 per cent in Halifax said they already had enough bike lanes.

The more suburban 905 area code region of southern Ontario stands out for having had the highest percentage of respondents say bike lanes in their area were a bad thing. 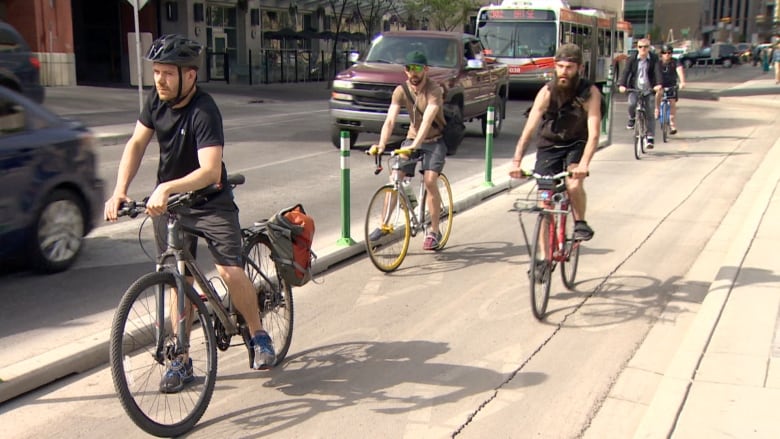 Respondents in Western Canada were more likely to respond that there were either too many or the right number of bike lanes in their cities. In this file photo, cyclists make their way down the 5th Street S.W. cycle track in Calgary. (CBC)

“This is about mindsets and change,” Kurl said. “In the cities of Edmonton, Vancouver and Calgary we have seen in more recent years a push from those municipal governments to increase the number of bike lanes, and of course people aren’t generally comfortable with change, and that will change in itself over time, I think as people get more used to it.

“But for the time being anything new, anything confusing, anything divisive will often provoke a little bit of backlash.”

Cyclist/driver conflict — who is to blame?

When it came to conflict between cars and bikes, the poll suggested big divisions based on certain demographics.

Overall, two-thirds of Canadians said there were too many cyclists in their communities who regularly don’t follow the rules of the road, while nearly an equal number of respondents said too many drivers don’t pay enough attention to bicycles. 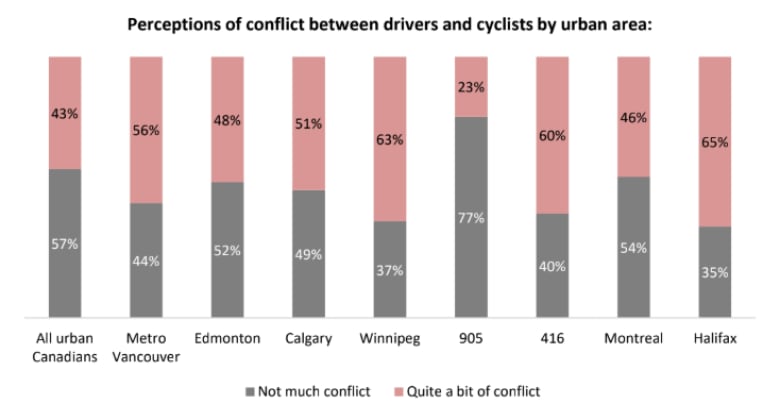 Kurl attributes this divide to road-rule confusion and said people who were taught to drive more than 20 years ago likely weren’t getting much instruction on how to share the road with cyclists.

“I think we’re at the point where probably more instruction would benefit everyone,” she said.

Unsurprisingly, what one prefers to drive had a huge impact on poll respondents’ opinions: 70 per cent of respondents who reported biking several times a week said drivers were more likely to blame for conflict, while only 33 per cent of drivers blamed their fellow motorists.

The president of Bike Calgary, a non-profit cycling advocacy group that offers a course on commuter cycling skills, took issue with the poll focusing so heavily on an us-vs.-them divide between cyclists and motorists.

“I do think the conflict is a bit exaggerated,” said Agustin Louro. “A lot of people bike and drive and take transit and walk, so I think that … narrative is overblown and not really very helpful.”

A survey of this size has an expected margin of error of plus or minus 2 percentage points, 19 times out of 20.