It was a terrifyingly close call for a family with a three-month-old baby last weekend, when they plunged through the ice near Igloolik, Nunavut.

Pauline Amaaq and her partner Glenn Iyerak planned a trip to take their seven-year-old son and three-month-old baby ice fishing.

‘I’m drowning. I’m drowning,’ is what my boy was saying.– Pauline Amaaq

After hearing about their trip, Pauline’s brother, Noah Amaaq, also joined in at the last minute.

Pauline’s three-month-old son was saved from icy waters recently when the family’s sled fell through the ice. (Pauline Amaaq/Facebook)

Pauline said the family of five travelled about 40 minutes southwest of Igloolik and set up camp.

Glenn went searching for routes to get to some fishing holes, and saw other families ice fishing in a different area.

“We got really excited and started looking for a path,” said Pauline, who was on the qamutik — a traditional Inuit sled attached to the snowmobile — along with her brother and her two kids in tow, while Glenn dragged them by snowmobile.

But along the way, Pauline said the sled started slowly sinking through the ice. Pauline, her kids, and her brother were inside a small shelter on the sled as it took on water.

Pauline said Glenn jumped in the water to try to rescue them, but he didn’t know how to swim.

Once he got all warm and fed, he started to smile again.– Pauline Amaaq

Noah managed to get free of the sled and saved Glenn first.

But Noah’s work was far from over — Pauline’s seven-year-old son was in trouble. 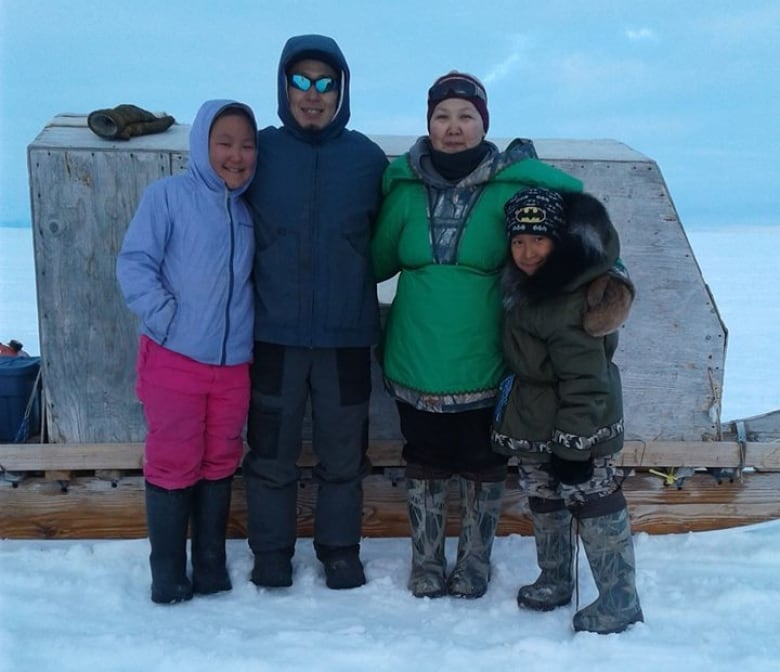 The qamutik — a traditional Inuit sled attached to the snowmobile pictured here — started slowly sinking while Pauline Amaaq and her family were looking for a spot to go ice fishing. Pauline, her brother Noah, and her two young boys were inside a small shelter on the sled as it started sinking. (Pauline Amaaq/Facebook)

“‘I’m drowning, I’m drowning,’ is what my boy was saying. But my poor boy had no clue he was saying that,” said Pauline, in Inuktitut.

Her brother Noah pulled the seven-year-old to safety, and Pauline and her baby managed to stay afloat on the qamutik.

Passersby to the rescue

While the family was soaking wet, another family heading home drove by and saw the chaos.

The passing family rescued Pauline and her relatives — throwing a rope to help get the mother and her baby out of the water. Then, they set up a tent and got the stove going for them to warm up, said Pauline.

She said her three-month-old boy really needed the heat.

“When I wanted to feed him, poor boy was all weak and cold … So I fed him and warmed him up. Once he got all warm and fed, he started to smile again,” said Pauline.

The family headed back to the community the next day, grateful for the passersby and Noah.