European Union leaders claimed a breakthrough deal Friday on how to deal with the pressures of migration after all-night talks helped accommodate Italian demands for more help.

The EU leaders said the agreement would bolster the bloc’s external borders and improve the solidarity among member nations to ease pressure on point-of-entry nations like Greece and Italy.

The plan proposes screening migrants in North Africa for asylum eligibility and setting up control centres within the bloc by nations which would volunteer to have them.

Beyond demands from Italy, German Chancellor Angela Merkel also faced intense domestic pressure to find a breakthrough to stave off a government crisis at home.

‘We are not an island’

“We got a European solution and a work of co-operation,” said French President Emmanuel Macron.

For several years now, EU nations have been trying to stem the flow of those making the perilous journey to the continent by sea, part of a desperate attempt to shore up EU unity on an issue that has helped fuel a political crisis in several member nations.

“We are not an island,” Macron said. “Europe will have to live a long time with such migratory pressures which come from countries in crisis, poor countries.”

No North African countries have agreed so far to sign on to the plan, though possible EU funding that could bring billions in aid may prove persuasive.

‘Europe is going step by step’

Italy long held up any interim agreements at the summit unless it received concrete commitments the country would get help managing the waves of newcomers that arrive from across the Mediterranean.

As with so many EU agreements, Friday’s deal stopped well short of being decisive in solving the problem but created enough of a platform to build on.

“Europe is going step by step, and this was necessary,” said Dutch Prime Minister Mark Rutte.

No interest from Africa yet

Details are sketchy, but the proposed EU plan involves erecting a virtual wall in northern Africa by placing people who try to leave for Europe in centres in countries like Algeria, Egypt, Libya, Morocco, Niger and Tunisia. European Union funds would be used to persuade the countries to sign on, though none has signalled interest so far.

Morocco’s director of migration and border surveillance, Khalid Zerouali, told The Associated Press that the kingdom isn’t interested in hosting a station for screening migrants, saying “that’s not the solution.”

A migrant intercepted aboard a dinghy off the coast in the Strait of Gibraltar, sits wrapped in a towel in a sport centre after arriving on a rescue boat at the port of Barbate in southern Spain. Spain has seen a surge in migrants arriving by sea. (Jon Nazca/Reuters)

Migrants sometimes use Morocco as a jumping-off point to reach Spain, which has seen a surge in migrants coming across by sea this year. Zerouali said that some 25,000 have been stopped so far this year.

The International Organization for Migration estimates that some 80,000 people will enter Europe by sea this year, based on current trends. That’s around half as many as in 2017.

Yet anti-migrant parties have made significant political gains, most recently in Italy, which along with Greece and Spain is among the preferred landing destinations for people from Africa seeking better lives.

Merkel, for her part, is fighting a battle at home and abroad against critics who accuse her of endangering European security with her hospitality. Her conservative coalition is under pressure from the far-right Alternative for Germany. 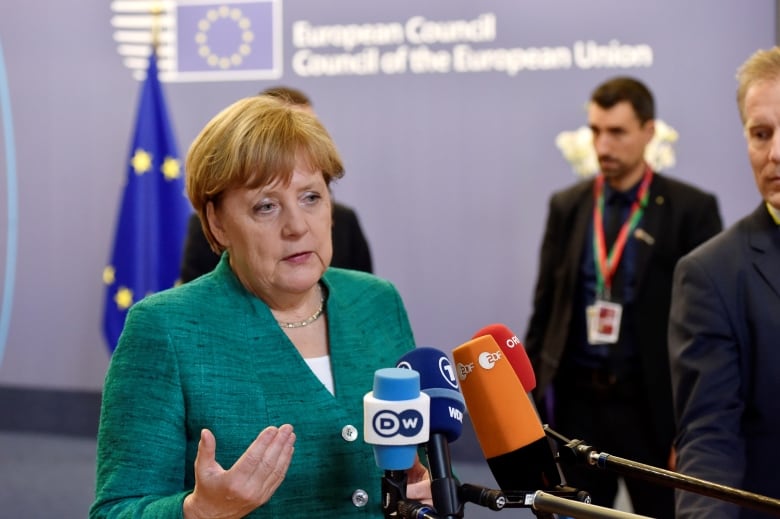 The party has seen a surge in support since 2015, when over 1 million people entered Europe, mostly fleeing conflicts in Syria and Iraq. Populist leaders in southern and eastern Europe have rejected Merkel’s calls for a wholesale reform of Europe’s migration system.

But Merkel is deeply aware of the threat the issue poses to Europe, notably to its Schengen passport-free travel area — one of the jewels in the EU crown — that allows easy cross-border business and travel.

“Europe has many challenges, but that of migration could determine the fate of the European Union,” Merkel told German lawmakers Thursday before heading to the summit.

The partner in Merkel’s coalition government is demanding that migrants be turned away at Germany’s border with Austria. EU officials fear such a move would set off a domino effect, leading Austria to seal its border with Italy, and Italy to fully close its ports to migrants rescued at sea. 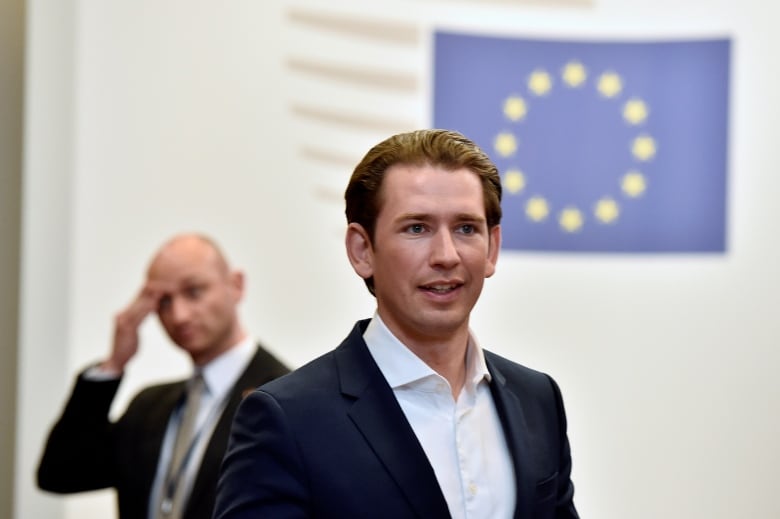 Austrian Chancellor Sebastian Kurz said, “Being rescued in the Mediterranean must not automatically become a ticket to central Europe.” (Eric Vidal/Reuters)

Austrian Chancellor Sebastian Kurz said he hoped the summit would be a turning point.

“Being rescued in the Mediterranean must not automatically become a ticket to central Europe,” said Kurz, another supporter of the plan to screen migrants in North Africa.

Brussels wants the International Organization for Migration and the UN refugee agency to oversee the Africa plan, but they prefer to provide sanctuary to migrants inside the EU.