Two missing ceiling tiles and a slightly bent metal shelf are the only signs left behind after an eventful arrest at a Spruce Grove convenience store two days ago.

On Monday afternoon, a 29-year-old woman, fell through the ceiling of the King Street Reddi Mart and into the store below while trying to escape police. She was arrested without further incident.

She was with a 28-year-old man, who was tasered and then wrestled to the ground by an RCMP officer and the store owner.

A woman fell from the ceiling of a Spruce Grove convenience store while trying to escape from police. (Supplied/Paul Chauhan)

“RCMP Spruce Grove detachment is the best people and especially the constable who came on the scene,” the store owner, Paul Chauhan, told CBC News on Wednesday.

“He worked really, really hard to keep the people safe.”

Chauhan called police after becoming suspicious of the couple. He said the man tried to buy a can of pop by tapping a credit card, but was declined by the machine multiple times.

When Chauhan suggested he swipe or insert the card, he said the man told him it was his girlfriend’s card and that she was at work.

The man left the store, Chauhan said, but he then saw the same man sitting outside the building with a woman who he assumed to be his girlfriend.

He then called RCMP to report that he suspected the couple was using a stolen credit card. 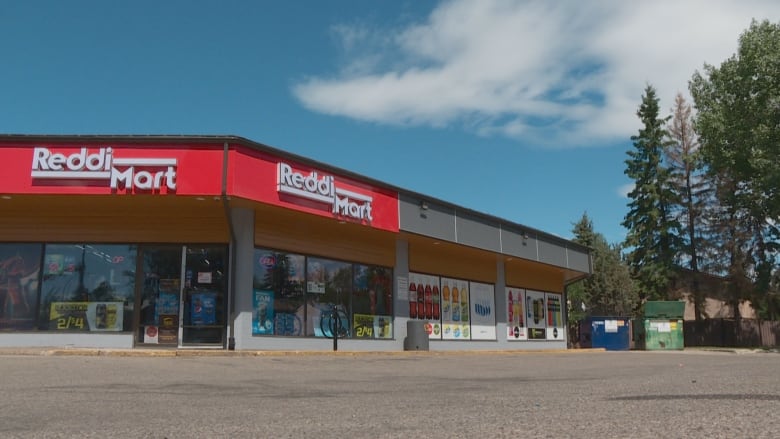 A man and a woman tried to escape Spruce Grove RCMP at the local Reddi Mart on Monday. (Zoe Todd/CBC)

Spruce Grove RCMP said they responded to a complaint of stolen credit cards at the local Reddi Mart around 1:17 p.m.

“As the RCMP member attempted to detain both suspects, the male pushed the female suspect at the officer,” RCMP spokesperson Const. Shelley Nasheim wrote in the news release.

The two fought the officer in an attempt to escape arrest, she said. 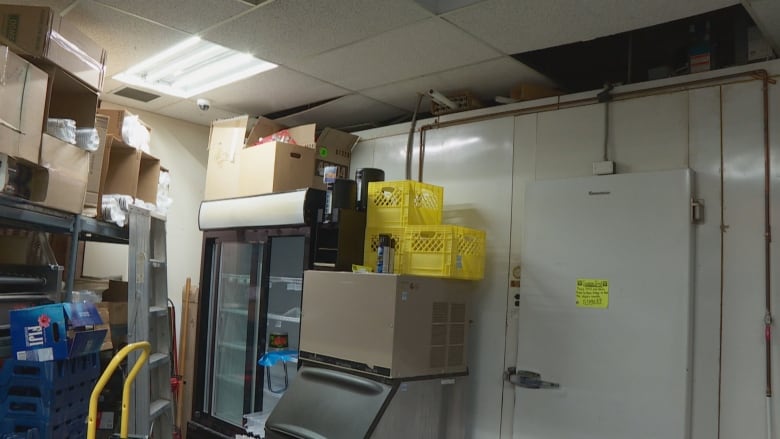 The woman mounted a ladder in the store’s back room and climbed into the space above the ceiling tiles in an attempt to escape Spruce Grove RCMP on Monday. (Zoe Todd/CBC)

While the officer wrestled with the man, the woman ran into the stores’ back room. There, she scaled a ladder and then clambered into the space above the ceiling tiles.

As more officers arrived, the woman crashed through the store’s ceiling and onto a row of metal shelving below. She was arrested without further incident, Nasheim said.

“The business owner provided valuable assistance to the responding RCMP member which was instrumental in helping with the apprehension of both suspects,” she said in the news release. 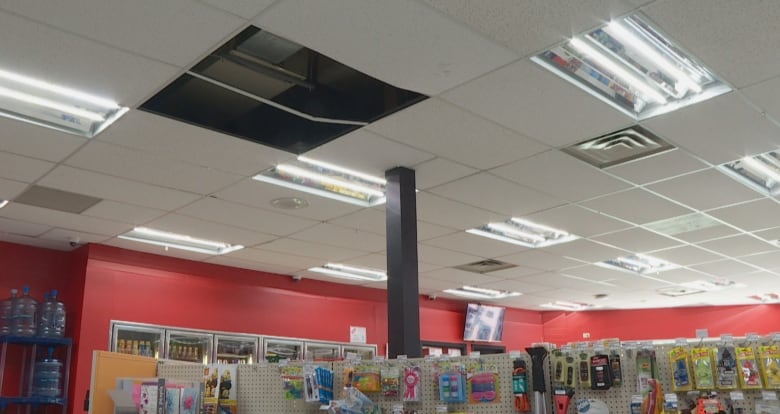 Ceiling tiles were still missing Wednesday, two days after a woman fell into the store while trying to escape police. (Zoe Todd/CBC) 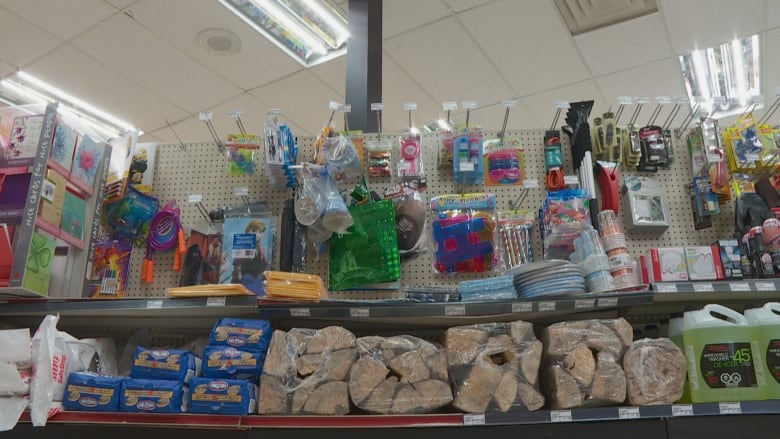 The metal shelves the woman dropped onto are slightly bent. (Zoe Todd/CBC)

Surveillance footage shared by Chauhan shows him helping the responding RCMP officer wrangle the male suspect to the ground. Chauhan then blocks the door, preventing the woman from escaping.

Chauhan said he stepped in when he saw the man grabbing at the RCMP officer’s gun.

“Thank god nobody got hurt,” he said. “We have two less people in the world who are bad.”

The two suspects were scheduled to appear in Stony Plain court on Wednesday.