The future of groundskeeping has arrived in Edmonton.

At least, that’s what the City of Edmonton is saying as it pilots a pair of driverless electric lawn mowers this summer.

The two-foot-long mowers are programmed to stay within electric fencing that runs underground along the perimeter of a small soccer pitch in Coronation Park near 142nd Street and 111th Avenue.

The Husqvarna 450x takes roughly 12 hours to cut the field, factoring in the four-hour battery life and an hour-long recharge.

Olivier Le Tynevez-Dobel, sports field supervisor with the city, was at the park on Wednesday  — offering his foot to demonstrate how the self-driving grasscutter can reroute around objects in its path.

“We are very interested in new technologies and always improving the way we do work, and also be conscious about our environmental footprint,” he said.

The pilot will give the city a chance to see how people interact with the mowers. It didn’t take long for staff to find their first case study.

In the four days since the mowers started running, someone has already tried taking one home, Le Tynevez-Dobel said.

Staff were alerted that the mower had been taken outside the park perimeter. They then tracked down the would-be lawnmower larcenist who gave up the unit, claiming he didn’t know what it was, Le Tynevez-Dobel said.

The units cost roughly $9,000 dollars, including installation. The cost of replacing $50 blades every 45 days or so could add an extra $6,000 dollars over its lifespan.

The electric mowers, deployed on a larger scale, might also help Edmonton inch toward its carbon-neutral goal.

But not everyone is excited about automation in the city’s parks.

“Our members are deeply concerned about the impact this is going to have on their future employment – future career goals,” said Mike Scott, president of CUPE 30, which represent the workers who maintain parks.

He said the union only heard about the pilot project on Tuesday, when a notice of the demonstration was made public.

But Le Tynevez-Dobel said the mowers were not replacing any jobs or employees. 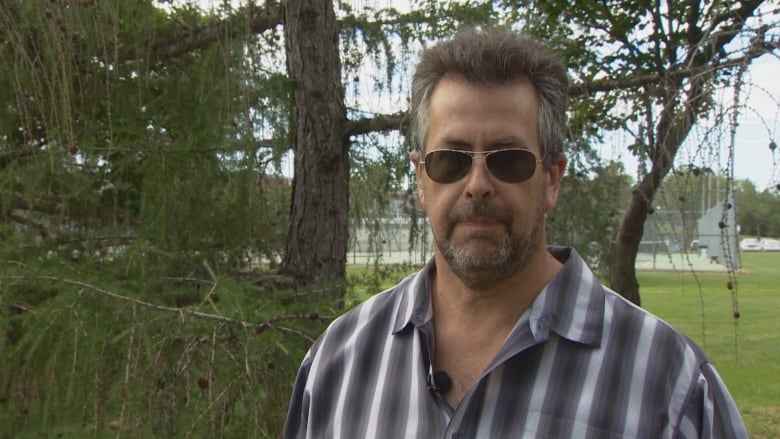 CUPE 30 president Mike Scott said he’s concerned about what automation could mean for city maintenance workers in the future. (CBC)

“This is not a rollout city-wide of robotic mowers,” he said. “This mower is not here to replace any employment or employees.”

If the pilot goes well, he said the units would likely be placed where it’s dangerous for the existing fleet to venture, such as the banks of ravines and ponds or close to power lines.

Concerns over industry-wide automation may seem inflated, but some experts say a future without groundskeepers is increasingly likely.

A study out of the University of Oxford ranked more than 700 jobs by their likelihood of becoming ‘computerisable’.

Landscaping and groundskeeping workers ranked 623, with a 95 per cent likelihood that their work would eventually be automated.

While there’s no indication park maintenance will be automated any time soon, municipalities across the country are reviewing their services — from grass cutting to clerical work — for opportunities, said Sunil Johal, policy director at the Mowat Centre out of the University of Toronto.

“Now we have technologies that are much more sophisticated and making it more likely that a broader range of services could actually be affected.”

Johal co-authored a report in late 2016 where he estimated as many as 7.5 million Canadian jobs could be at risk due to automation in the next 10 to 15 years.

Though the Roomba-like mowers may bump into shrubs in Coronation Park, if the pilot is successful Edmontonians may grow accustomed to seeing robots on the city’s soccer pitches. 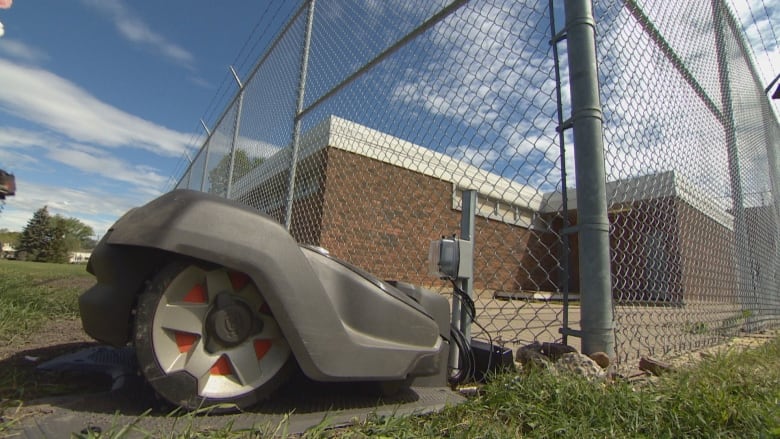 An automated lawn mower is photographed at the charging station in Coronation Park. The mower has a four hour battery life and takes one hour to recharge. (CBC)