Bombardment by pro-government forces forced three hospitals out of service overnight in rebel-held southwestern Syria as a Russian-backed offensive gathered pace, the Syrian Observatory for Human Rights and a medical relief group said on Wednesday.

Syrian President Bashar al-Assad, whose forces have already driven rebels out of all areas near the capital Damascus this year, is aiming to restore control over rebel-held areas at the borders with Jordan and the Israeli-occupied Golan Heights.

The United Nations says the 10-day-old offensive has uprooted at least 45,000 civilians. Syrian government forces are thrusting into rebel areas with Russian support, despite warnings from the United States which brokered a “de-escalation” deal with Moscow for southwestern Syria last year.

Washington had warned Assad of serious repercussions, but there has been no sign of action to stop him.

Warplanes hit the towns of Dael and Saida for the first time since the assault began, opposition activists said. The Observatory said the offensive had killed 47 people so far. UOSSM, a medical charity that operates in the area, put the
death toll at 68.

The International Committee of the Red Cross (ICRC) said it was “concerned about the safety of tens of thousands of
civilians caught in the line of fire or fleeing violence in the southern governorate of Daraa.”

Assad’s forces are now in their strongest position since the early days of a seven-year war that has killed at least half a million people and driven more than half of Syrians from their homes.

Throughout the war, government forces have repeatedly been accused of striking medical facilities in opposition-held areas to force rebels to surrender. The government and its Russian allies deny intentionally targeting them.

The medical facilities struck overnight were located in the towns of Saida, al-Jeeza and al-Musayfra near the Jordanian border to the east of Deraa city.

The fighting in Syria is squeezing people further and further south. They will eventually be left with nowhere else to turn.– Youri Saadallah, Norwegian Refugee Council

State-run TV station al-Ikhbariya said the electricity to Deraa city — which is divided between rebels and the government — had been cut because “terrorist organisations” had targeted a power line in al-Musayfra, some 20 kilometres to the east.

It also said 450 militants had turned themselves in, in the town of Shaara, some 60 kilometres north of Deraa.

The southwest is one of just two large areas of Syria still in the hands of rebels seeking to topple Assad, along with a region in the northwest near the Turkish border.

Children ride on a truck with their belongings in the countryside near Deraa, southern Syria, on Saturday. (Alaa al-Faqir/Reuters)

Washington’s sponsorship of the truce in the southwest is one of the highest profile U.S. diplomatic initiatives in Syria since U.S. President Donald Trump took office. But despite repeated U.S. warnings, there is little sign so far of any steps by Washington to take action to halt the assault.

The United States has told Free Syrian Army (FSA) rebels they should not expect military support against the offensive, according to a message sent to rebel commanders seen by Reuters.

Observatory Director Rami Abdulrahman said a total of five hospitals had been targeted in the campaign so far.

Ahmad al-Dbis, safety and security manager at UOSSM, a medical charity that works in opposition parts of Syria, said the bombardment had caused “material damage” to the three hospitals on Wednesday.

A fourth hospital, in Nawa, was also targeted and closed on Wednesday, even though it was not directly hit, he said. The shell landed 100 metres away, and while there was no damage, the staff evacuated out of fear for their safety.

“In addition, a civil defence centre in al-Musayfra was struck and damaged,” added Dbis, who is based in northern Syria. 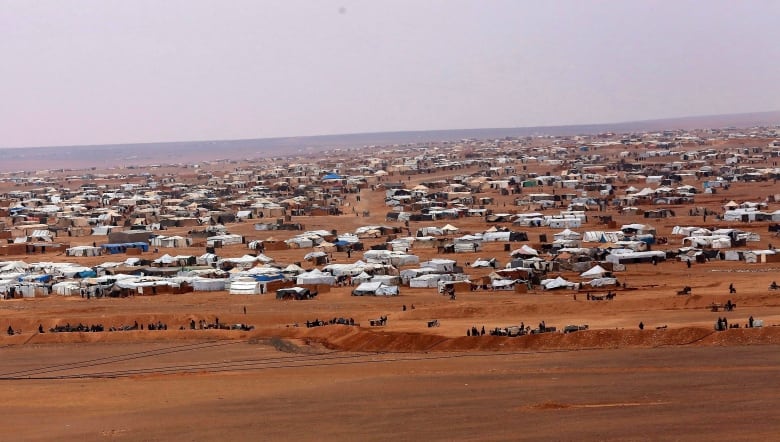 The informal Rukban camp for displaced Syrians is seen between the Jordan and Syria borders on Feb. 14, 2017. (Raad Adayleh/Associated Press)

Jordan, which already hosts some 650,000 Syrian refugees, has said it will not open the border for new refugees to cross. The Norwegian Refugee Council (NRC) appealed to Jordan to ensure those fleeing would be able to seek refuge.

“The fighting in Syria is squeezing people further and further south. They will eventually be left with nowhere else to turn,” NRC acting Regional Director Youri Saadallah said in a statement. “Jordan has done so much over the years to accommodate hundreds of thousands of refugees from Syria, but unfortunately the international community must rely on it to be generous once more.”