The Coldwater Indian Band is asking the National Energy Board to reject the proposed route of the Trans Mountain pipeline expansion, arguing it poses an unacceptable risk to the sole source of drinking water for 90 per cent of people on the reserve.

The band had its day before the NEB at the civic centre in Merritt, B.C., on Thursday, at the last of the detailed route hearings over Kinder Morgan’s pipeline project until the fall.

“Without water, nothing can survive,” Chief Lee Spahan told the board.

Amid technical arguments and disagreements over the aquifer and conflicting hydrogeological reports, Spahan spoke about what’s at stake for him, his community and generations to come.

He said the nation is concerned about its drinking water but beyond that, he described the nation’s deep cultural and spiritual connection to the water.

“Coldwater is very sacred. Water is life,” he said.

He told stories about his nation’s beliefs: why certain creeks are sacred, the salmon in the Coldwater River, how the water is connected to ceremony.

“It’s our culture and our tradition. Maybe you don’t understand that. Maybe someday you will,” he said.

After nearly 13 hours the hearing was called to a close, before either party had a chance to make closing arguments.

They will instead submit their final remarks to the board next week, leaving it to the NEB to make a final call on whether twinning the pipeline just east of the Coldwater reserve is the best route for the pipeline expansion.

The NEB’s detailed route hearings are not about reopening the debate about the pipeline’s approval but instead are meant to rule on whether or not Trans Mountain is pursuing the “best possible route” for the twinning of the pipeline.

Landowners, First Nations and municipalities were able to file opposition documents to the NEB in relation to the specific route, as well as the proposed methods and timing of construction.

The hearings have been underway since late last year and rulings have been made throughout the process. As of April 2018, the NEB had approved nearly 66 per cent of the entire route. A marker for the existing Trans Mountain pipeline just south of the Coldwater reserve in the rising waters of Voght Creek. (Chantelle Bellrichard/CBC)

Spahan said Coldwater has been trying to find out for years why the “west alternative” route — one of three possibilities originally put forward by Trans Mountain — was never seriously considered.

That route would see the pipeline expansion constructed to the west of the community and would be further away from the aquifer the nation depends on.

“We have made repeated requests… for careful consideration of the west alternative, particularly given it poses no risk to our water supply,” said Spahan.

He said those requests have been directed to Trans Mountain, the NEB and the federal government.

According to Coldwater’s submissions, the alternative route is outside of the approved pipeline corridor.

When the NEB approved the pipeline with 157 conditions in 2016, one of them was specifically related to the Coldwater aquifer.

It requires Trans Mountain to provide a detailed report on the aquifer characteristics, the risks the route poses to the aquifer and how the company will address those risks through things like the pipeline route and project design. 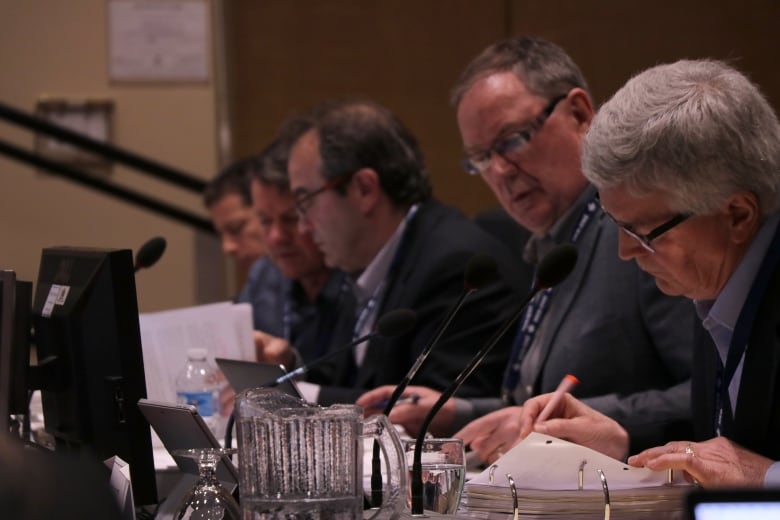 Trans Mountain had a group of representatives, along with external technical experts, respond to questions from Coldwater and the NEB at the detailed route hearing on Thursday. (Chantelle Bellrichard/CBC)

Trans Mountain has yet to complete the reporting and research attached to that condition.

During the hearing, drawing from an assortment of tables, reports and technical submissions, the company said it has figured out the best possible route for the pipeline along that section of the 1,150 kilometre-long expansion project.

“Trans Mountain has studied possible alternatives through this entire corridor, the Coldwater Valley, and has determined that the proposed route is the best route that aligns with the [Trans Mountain Expansion Project] routing criteria and results in the lowest overall risk,” said Greg Toth, a senior director with Kinder Morgan Canada.

“Trans Mountain has failed to establish that the proposed detailed route is the best route through the Coldwater Valley,” it wrote in one of its submissions for the hearing. 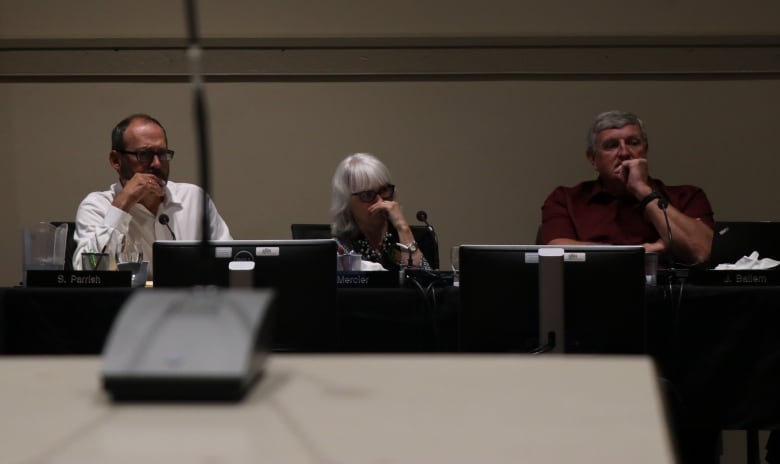 Coldwater is part of the consolidated legal challenge, which includes several First Nations, the cities of Burnaby and Vancouver, and two environmental groups, who are asking for the federal government’s approval of the expansion to be overturned. The case was presented to the Federal Court of Appeal late last year.

Coldwater also won a case against the federal government and Trans Mountain last fall related to the existing Trans Mountain pipeline, which was constructed on the Coldwater Reserve in 1952.

Nestlé Waters Canada was also scheduled to appear before the NEB in Merritt this week to voice its opposition to the pipeline route in relation to an aquifer in Hope, B.C., that it draws upon for bottled water products.

In a 15-minute hearing Wednesday, Trans Mountain and Nestlé Waters Canada made a joint submission saying they’d come to an agreement regarding routing and construction plans for the pipeline expansion, after Nestlé had voiced opposition to the route in relation to an aquifer in Hope, B.C., that it draws upon for bottled water products.

Final arguments from Trans Mountain and Coldwater will be submitted to the NEB next week. Then it will be up to the board to decide whether or not the company has proposed the best possible route for the expansion.

In its ruling, it can choose to accept the detailed route as is, with or without conditions. It can reject all or parts of the route or ask for more information before making a decision.