Firefighters are battling an out-of-control wildfire in Alberta’s Kananaskis Country.

The province issued an emergency alert for the Municipal District of Foothills shortly before 4 p.m. Sunday, and notified residents that a voluntary evacuation was in place for areas west of Highway 762, between Highway 22 and 178 Avenue W.

Residents were also instructed to avoid Highway 762, Highway 549, west of Millarville and Highway 66 west of Bragg Creek and to be prepared to evacuate. Range road 54A was closed south of Elbow River.

The blaze, located near McLean Creek, about 16-kilometres southwest of Bragg Creek, was approximately 100 hectares in size as of 5:45 p.m.. Sunday, according to the alert.

Fire crews from Alberta Forestry and the M.D. were on site, with five helicopters and heavy equipment.

“People and parties within that area have been notified,” said Alberta Wildfire information officer Matt Bell.

The fire was said to be headed in a north-easterly direction, toward the northwest corner of the M.D.

Smoke in the area could impact driving conditions and air quality, the alert cautioned.

Redwood Meadows Emergency Services wrote in a Facebook post Sunday that the blaze was generating a significant amount of smoke as it was in a cutblock, or clearcut area of the forest. 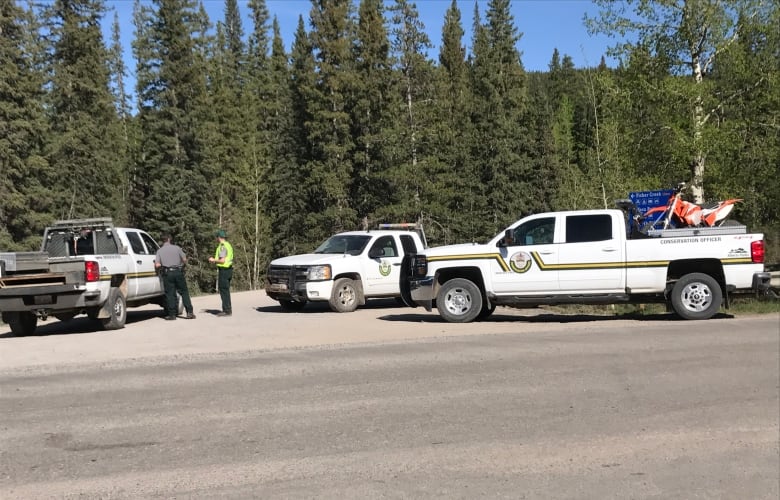 Roads were closed near Fisher Creek as crews responded to a wildfire near McLean Creek Sunday. (Anis Heydari/CBC)

Campers are being advised to avoid the McLean Creek region, but no homes were thought to be in danger as of Sunday late afternoon.

Bragg Creek resident and business owner Marina Cooke said the air was filled with smoke earlier in the day, and she was concerned one of her neighbour’s homes might have been on fire before she received the emergency alert on her phone notifying her of the wildfire.

Cooke was spending her evening gathering up her pets and belongings, in case the wind picked up or turned toward the hamlet.

It brought up unhappy memories of 2013, when she was forced to flee her home due to flooding. She lost two businesses that year.

“Right now it’s just getting animals, making sure my son’s ready to go, some clothes, toothbrush, maybe some pictures … everything’s replaceable except some pictures, and of course, lives.”

There are six out-of-control wildfires burning in the province, most in northern Alberta, and much of the province is under a fire restriction or fire advisory.

An out-of-control wildfire is defined as a blaze that’s still burning and expected to grow larger.

A 27-person fire crew flew to Alberta from Nova Scotia Sunday to help ensure none of the forest fires get too big to handle, as part of the Canadian Mutual Aid Resource Sharing agreement.

Bell said the crew is currently working on two fires in the Lac La Biche area.