A delegation that included U.S. President Donald Trump’s daughter Ivanka Trump and son-in-law Jared Kushner has arrived in Israel for the official opening ceremony of the new U.S. embassy in Jerusalem.

Journalists gather Sunday near the compound of the U.S. consulate in Jerusalem, which will host the new U.S. embassy, as posters praising the U.S. president hang in the street. (Ahmad Gharabli/AFP/Getty Images)

The embassy is being relocated from Tel Aviv to southern Jerusalem’s Arnona neighbourhood, fulfilling longtime U.S. plans, but the highly contentious move comes at the start of what will be a busy and potentially turbulent week in Israel.

May 14 is the date on which Israel’s independence as a country is marked on the Western or Gregorian calendar, versus the Hebrew calendar, which marks the date as April 19. 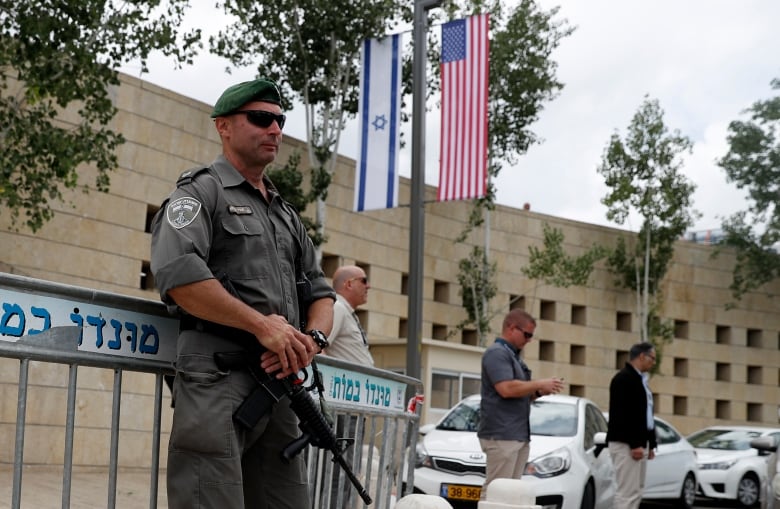 On Tuesday, Palestinians traditionally commemorate the events of 1948 as the “catastrophe” or Nakba, a reference to the war 70 years ago that drove them from their homes and resulted in the birth of the modern Jewish state.

The embassy move is seen by many Palestinians as an in-your-face affirmation of pro-Israel bias by Trump and a new blow to dreams of statehood. 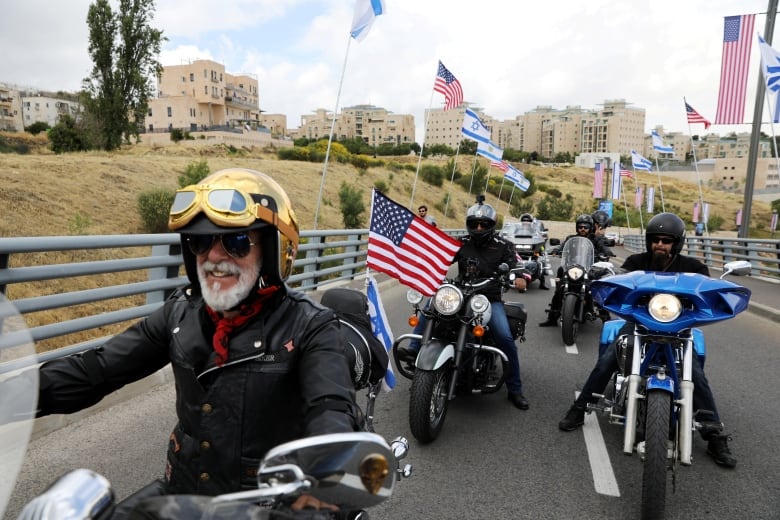 Riders from the Israeli Samson Riders motorcycle club are seen in the streets of Jerusalem with U.S. flags, on their way from the U.S. embassy in Tel Aviv to the location of the new U.S. embassy in Jerusalem on Sunday. (Ammar Awad/Reuters)

“The concern [this week] is that there could be potentially violent clashes in the Gaza Strip, in the West Bank and here in Jerusalem,” said CBC’s Derek Stoffel.

“As a result, the Israeli security forces, the army and police, have sent in reinforcements to various parts of the country … as the protests could very well turn violent.

“As we’ve seen in the last seven Fridays, we’ve seen Palestinian protests, and more than 40 Palestinians have been killed, many shot by Israeli forces as they made their way toward the border fence that separates Gaza from Israel.”

The U.S. is moving its embassy to a holy city that is at the core of the Israeli-Palestinian conflict and claimed by both sides as a capital.

Here is a snapshot of the city:

Jerusalem was partitioned after the Mideast war over Israel’s 1948 creation, with Israel controlling the west and Jordan the east, including major shrines of Islam, Judaism and Christianity. In 1967, Israel captured East Jerusalem, along with the West Bank and Gaza Strip. It expanded the municipal boundaries into the West Bank, increasing the size of East Jerusalem and annexing it to its capital, a move not recognized by most of the international community.

Since the 1990s, the fate of the city has been a core issue in U.S.-brokered talks on setting up a Palestinian state alongside Israel, with the Palestinians seeking East Jerusalem as a capital. Intermittent negotiations have failed, most recently in 2014, and chances of resuming them are slim. Israeli Prime Minister Benjamin Netanyahu says he won’t give up any part of the city, while Palestinian President Mahmoud Abbas says Trump’s policy shift on Jerusalem disqualified the U.S. as a broker.

In 2016, Jerusalem was home to almost 883,000 people, 62 per cent of them Jews and non-Arabs and 38 per cent Palestinians. The Arab share of the population has grown steadily since 1967, in part because of a higher birth rate. After 1967, Israel built a ring of settlement neighbourhoods in East Jerusalem to deepen its hold over the annexed area, where 207,000 Jews now live.

More than a decade ago, Israel built a West Bank separation barrier that slices through Arab neighbourhoods in East Jerusalem, forcing tens of thousands of Palestinian residents of the city to cross crowded checkpoints to get to downtown areas. Israel says the barrier, which in urban areas is mainly made up of cement walls, is a defence against militants. Palestinians say it’s a land grab.

Most of the international community, including the U.S., did not recognize Israel’s 1967 annexation of East Jerusalem. The prevailing view, including by the European Union, is that the fate of the city must be determined in negotiations.

In 1995, the U.S. Congress passed a bill with bipartisan support that recognized Jerusalem as Israel’s capital and required the U.S. embassy to move there. Until now, U.S. presidents had signed a waiver every six months that put off the move on security grounds.

The U.S. stance on East Jerusalem now has been thrown into confusion. In its December announcement, the Trump administration emphasized that recognition of Jerusalem as Israel’s capital does not change its stance that the two sides must work out the city’s final status. But Trump quickly appeared to contradict that, declaring, “We took Jerusalem off the table.”

In their 1949 armistice agreement, Israel and Jordan drew a “Green Line” of partition through the city. In one area of southeastern Jerusalem, they couldn’t agree and created a pentagon-shaped “area between the lines.”

The new embassy will operate temporarily from the U.S. consulate compound, which is partially located in the old no-man’s land and partially in west Jerusalem. The UN considers the area of the pentagon to be occupied territory because neither Israeli nor Jordanian forces were supposed to enter it after 1949, according to a senior UN official who spoke on condition of anonymity because he was not authorized to discuss the politically touchy issue with the media.

The U.S. State Department, presenting a defence of the location, argues that in practice, part of the no-man’s land has been in continuous Israeli use since 1949.