At least four buildings in Brandon’s downtown caught fire Saturday in what the city’s mayor said will “likely be one of the largest fires Brandon has ever seen.”

Around noon, crews began fighting flames billowing out of the Christie’s Office Plus building at Seventh and Pacific Avenue in the southwestern Manitoba city.

The fire later spread to a beer vendor and the Massey Manor, an apartment building across the street from the Christie’s building.

Despite firefighter’s best efforts to protect nearby buildings by spraying them down with water, a CBC reporter at the scene says the flames spread to a fourth neighbouring building later in the evening Saturday.

News of the fourth fire came just minutes after a city spokesperson told CBC News fcrews were only fighting spot fires at the scene shortly before 7 p.m.

Avril Moroz and her coworker, Alicia Hamilton, went to Dinsdale Park to watch the fires after smelling the smoke from several blocks away at Rideau Park Personal Care Home, where they had been working.

“It was just black smoke, the flames were just engulfing,” said Moroz. who estimated there were more than 200 people in the park watching fire crews battle the blaze.

“That’s when people get really freaked out.”

Chrest said Christie’s Office Plus is one of the original businesses in Brandon.

The company’s website says they opened their doors in the southwestern Manitoba city in 1881.

“Hopefully they’ll be able to rebuild and get back into operation in the future,” Chrest said.

Chrest said the city has requested “mutual aid, which is assistance from other fire departments in the area.”

He said crews from CFB Shilo, Carberry, Wawanesa and Souris have come to their aid, in addition to the Office of the Fire Commissioner.

The City of Brandon said there had been no injuries as of about 8 p.m.

A city spokesperson said the Red Cross has set up a reception centre for evacuees of the 58-unit Massey building at a local hotel, and a city bus was made available to move those people to the hotel. 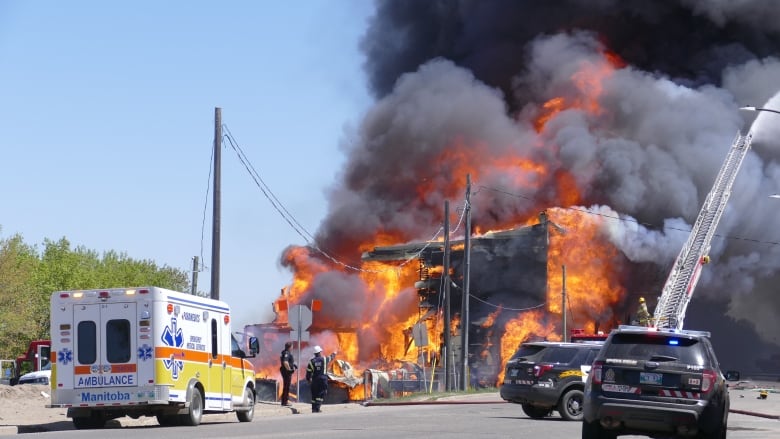 The City of Brandon said there had been injuries in the fires as of Saturday evening. (Riley Laychuk/CBC)

The Salvation Army is also providing those impacted with food, beverages and emotional support.

“Shocked, I think,” she said, when asked how evacuees are feeling. “The folks … who have been evacuated, they’re quite emotional and dealing with the trauma.

“Very natural for this kind of thing, but I think they’re holding up pretty good all in all.”

There’s no word on what sparked the blaze, and the city couldn’t immediately say exactly how many were evacuated.