Nestlé Waters Canada, a subsidiary of the world’s largest food and beverage company, appeared before the National Energy Board on Wednesday in Merritt, B.C.

It was scheduled to voice its opposition to the route of the Trans Mountain Pipeline Expansion, which cuts through a Nestlé water-bottling property in Hope, B.C., but instead announced it had come to an agreement with the pipeline company.

“We have some good news. The facts are that Nestlé and Trans Mountain have been working together collaboratively to try and resolve the issues and concerns that Nestlé has raised,” said lawyer Gordon Nettleton, who spoke on behalf of Nestlé in addressing the NEB.

Nestlé® Pure Life® Natural Spring Water ‘comes from deep aquifers on our properties in Aberfoyle, Ontario, and Hope, British Columbia,’ according to the company website. (Nestlé)

Nettleton explained that Trans Mountain agreed to change the route of the pipeline in the area around its Hope property and said the company also agreed to address its concerns around timing and methods of construction.

It’s not clear exactly when the agreement was made. As of May 3, Nestlé had still expressed concerns to the NEB and stated it was currently going through the board’s alternative dispute resolution process with the pipeline company.

Hearings not about pipeline approval

The NEB is in Merritt for three days this week, on its six of seven scheduled stops for detailed route hearings.

The hearings don’t allow for a reopening of the debate over the project’s approval, but instead are meant to make rulings on concerns raised by individual landowners, First Nations and municipalities over the specific route of the pipeline, within the already approved corridor.

When it comes to the Nestlé statement of opposition, the company was looking for a very specific re-routing of the pipeline, among a couple of other things related to construction.

In its opposition filing to the NEB in May 2017, Nestlé detailed its concerns about the expanded pipeline’s proximity to its spring-water facility, a site where 300 million litres of water are bottled each year from the Kawkawa Lake aquifer.

“The drawings shown in your notice place the new and existing pipelines within 20 metres of Nestlé’s aquifer access point,” the filing stated.

“Construction activities along the proposed detailed route are expected to cause unnecessary and harmful disturbances to the physical expression of the Hope Springs and could contaminate the high quality and highly-permeable groundwater aquifer and surface water Nestlé stewards and relies upon for its operations.” 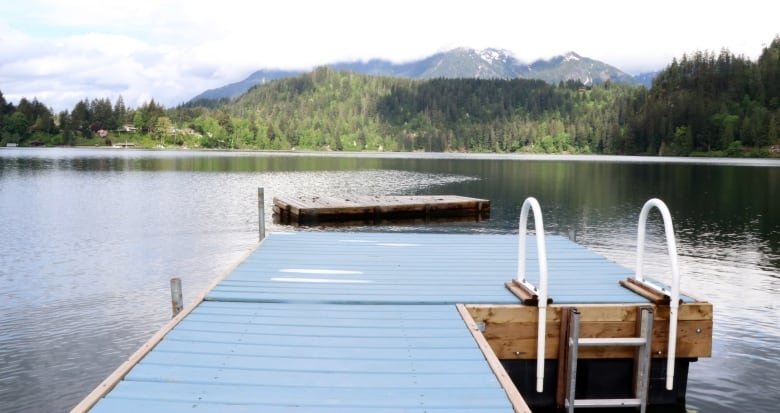 Kawkawa Lake, in Hope, B.C., is part of the same watershed that Nestlé draws water from. (Chantelle Bellrichard/CBC)

With the two companies in agreement, it is up to the NEB to finalize its decision with respect to the re-routing of the pipeline. Both companies have urged the NEB to accept the modification.

“This is a result that hopefully we can move forward with and see the project proceed,” said Nettleton.

The hearing was scheduled to last about three hours but had wrapped up in less than 15 minutes.

Thursday will be the last day of the NEB detailed route hearings in Merritt. The Coldwater Indian Band is scheduled in for the entire day.

Among the First Nation’s primary concerns: the potential impacts of the pipeline on the aquifer that sustains the community.