Almost 900 people have been evacuated from two fire-threatened eastern Manitoba First Nations, with another 200 expected to touch down in Winnipeg by the end of Thursday, as a 20,000-hectare fire continues to burn toward the communities of Little Grand Rapids and Pauingassi.

Evacuees are describing the situation as chaotic. “Everybody on Facebook is trying to figure out where is, have you seen my son? Have you seen my daughter? Can you let them know where I am?” said Theresa Eischen, who was forced to flee Little Grand Rapids.

A girl drags her suitcase toward a CC-130 Hercules in Red Lake, Ont., to be flown to Winnipeg as forest fires threaten Little Grand Rapids and Pauingassi First Nations in Manitoba. (Tyson Koschik/CBC)

As of 2:30 p.m., 219 people remained in Pauingassi — where helicopters and small float planes have helped get people out because the community doesn’t have an airstrip — and 18 people in Little Grand Rapids. They were expected to make it to Winnipeg by the end of Thursday.

Hazy skies continue to pose issues for large planes, Small said. In many cases, smaller aircraft are shuttling groups to Red Lake, Ont., where people are then boarding Armed Forces Hercules planes to be flown to Winnipeg.

“It was scorching hot at the airport in Little Grand,” said James Eischen, who was among some passengers airlifted to Red Lake in a military helicopter on Thursday and later flown to Winnipeg in a Hercules to stay in a hotel with other evacuees.

In total, the Red Cross is supporting 1,800 fire evacuees, including those who fled fires approaching Sapotaweyak Cree Nation (in northwestern Manitoba) and Kinonjeoshtegon First Nation (in the Interlake).

“Most of them are scared, they’re frustrated, they’re upset, they want to get some food and get some sleep,” said Red Cross regional vice-president Shawn Feely.

The total number of evacuees could reach 2,200 by the end of the day if crews finish evacuations in Pauingassi and Little Grand Rapids, said Feely. 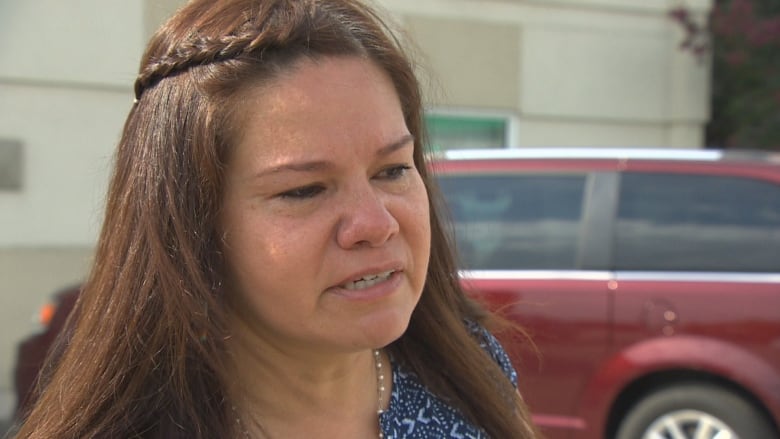 Theresa Eischen had to leave her home in Little Grand Rapids and described a chaotic evacuation in her fly-in Manitoba community. (Lyza Sale/CBC)

“We were just glad to come in and go to sleep.”

All Eischen was able to bring was a bag of clothes.

Eischen’s elderly parents were among the first wave removed from Little Grand Rapids, though some of his cousins were still waiting to leave Thursday. 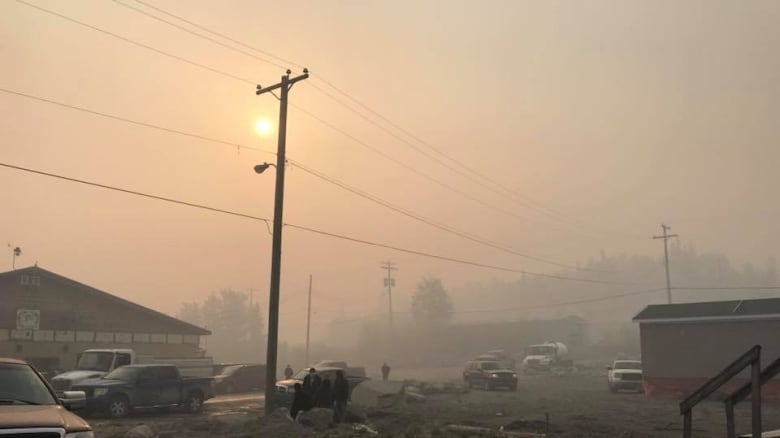 A small group gathers in Little Grand Rapids as the nearby forest fire spews ash and smoke into the sky. (Submitted by Theresa Eischen)

Pauingassi and Little Grand Rapids are less than 20 kilometres apart and about 260 kilometres northeast of Winnipeg near the Ontario border.

Unusually dry spring conditions have prompted weeks-long burn bans and contributed to the spread of more than 160 fires in Manitoba this spring. The majority of the fires have been caused by human activity.

More than 700 people from Little Grand Rapids and Pauingassi are in Winnipeg after being air lifted out of the area, forced to leave their own communities by raging forest fires. 1:37

The Little Grand Rapids fire was human caused, the Manitoba government said, and initial reports suggested 11 homes in the community were damaged in the fire.

People in parts of Manitoba’s Interlake region, between Lake Winnipeg and Lake Manitoba, were also forced to leave this week due to fires.

Small said a small number of people who left Kinonjeoshtegon First Nation (also known as Jackhead), 225 kilometres north of Winnipeg, are expected to be able to return home Thursday.

Roughly 700 evacuees from Sapotaweyak Cree Nation, about 400 kilometres northwest of Winnipeg, remain in hotels in Brandon, Swan River and The Pas. A fire forced them to leave the community on Sunday and Monday.

In total, 173 fires are burning in Manitoba. The average number of fires this time of year is 105.