The Israeli military on Thursday said it attacked “dozens” of Iranian targets in neighbouring Syria in response to an Iranian rocket barrage on Israeli positions in the Golan Heights, in the most serious military confrontation between the two bitter enemies to date.

Israel said the targets included weapons storage, logistics sites and intelligence centres used by elite Iranian forces in Syria. It also said it destroyed several Syrian air-defence systems after coming under heavy fire. It said none of its warplanes was hit.

The blistering Israeli assault was by far the most intensive Israeli action in neighbouring Syria since the civil war broke out there in 2011. Israel has largely tried to stay on the sidelines, but has previously acknowledged carrying out over 100 airstrikes over the past seven years, most believed to be aimed at Iranian weapons shipments bound for the Hezbollah militant group.

But with the civil war appearing to wind down, and Iranian forces looking to establish a foothold on Israel’s doorstep, Israel has stepped up its response. Speaking at the Herzliya Conference, an annual security gathering north of Tel Aviv, Defence Minister Avigdor Lieberman said Israel would respond fiercely to any further Iranian actions.

“We will not let Iran turn Syria into a forward base against Israel. This is the policy, a very, very clear policy, and we’re acting according to this policy,” he said. “We, of course, struck almost all the Iranian infrastructure in Syria, and they need to remember this arrogance of theirs. If we get rain, they’ll get a flood. I hope that we ended this chapter and that everyone understood.”

Iranian state television broke its silence over the Israeli airstrikes late Thursday morning, the start of the Iranian weekend. A presenter announced the Israeli strikes, sourcing the information to Syria’s state-run SANA news agency. The broadcaster also described the Israeli attack as “unprecedented” since the 1967 Mideast war.

There was no immediate word on Iranian casualties. Syria’s capital, Damascus, shook with sounds of explosions just before dawn, and firing by Syrian air defenses over the city was heard throughout the night. Syria’s state news agency SANA quoted a Syrian military official as saying Israeli missiles hit air defense positions, radar stations and a weapons warehouse, but claiming most incoming rockets were intercepted. Syrian activists said the onslaught lasted more than five hours.

In recent months, Israel has warned that it will not accept a permanent Iranian military presence in Syria. Iran has accused Israel of carrying out a series of deadly strikes on Iranian military positions in Syria in recent weeks, and had vowed retaliation. Iran has sent thousands of troops to back Syrian President Bashar al-Assad, and Israel fears that as the fighting nears an end, Iran and tens of thousands of Shia militiamen will turn their focus to Israel. 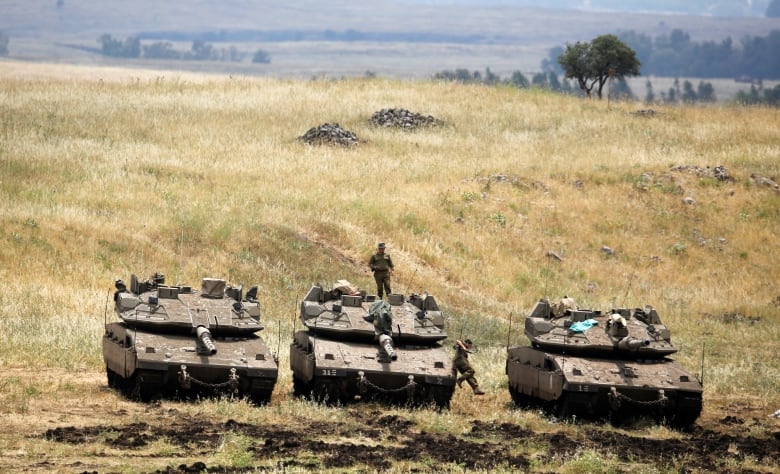 Israeli soldiers and tanks are seen near the Israeli side of the border with Syria in the Israeli-occupied Golan Heights on Wednesday. (Amir Cohen/Reuters)

Lt.-Col. Jonathan Conricus, a military spokesperson, said Israel was not looking to escalate the situation. But he said troops will continue to be on “very high alert.”

“Should there be another Iranian attack, we will be prepared for it,” he said.

Iran’s ability to hit back could be limited. Its resources in Syria pale in comparison to the high-tech Israeli military. Iran also could be wary of military entanglement at a time when it is trying to salvage the international nuclear deal.

Earlier Thursday, Israel said Iran’s Al Quds force fired 20 rockets at Israeli front-line military positions in the Golan Heights. Conricus said four of the rockets were intercepted, while the others fell short of their targets. The incoming attack set off air raid sirens in the Israeli-controlled Golan, which was captured from Syria in the 1967 Mideast war.

Syrian activists reported Israeli airstrikes hitting targets near Damascus. One video posted online showed a large explosion and shrapnel flying in the air. Residents reported loud sounds that rocked their buildings. It was not immediately clear what was hit.

Al-Ikhbariya TV said Israel also targeted military posts in southern Suweida province, including an air base, and struck near Homs in central Syria. The state TV station said the attacks were foiled.

Iranian officials offered no immediate comment on Israel’s claim about the missile fire.

Syrian media said it was the first time in years that Syrians had fired at Israeli forces in the Golan Heights.

Last month, an attack on Syria’s T4 air base in Homs province killed seven Iranian military personnel. On April 30, Israel was said to have struck government outposts in northern Syria, killing more than a dozen pro-government fighters, many of them Iranians.

Israel and Iran have appeared to be on a collision course for months.

In February, Israel shot down what it said was an armed Iranian drone that entered Israeli airspace. Israel responded by attacking anti-aircraft positions in Syria, but an Israeli warplane was shot down during the battle. 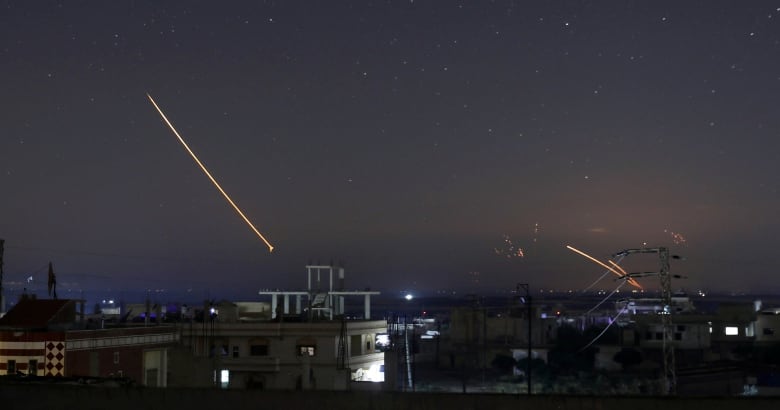 Russia has also sent forces to Syria to back Assad. But Israel and Russia have maintained close communications to prevent their air forces from coming into conflict.

Together with Putin, Netanyahu toured a parade celebrating the anniversary of the World War II victory over the Nazis and then met the Russian president at the Kremlin for consultations.

After 10 hours together, Netanyahu said he conveyed Israel’s obligation to defend itself against Iranian aggression.

Accompanied by the Syrian government, reporter Margaret Evans takes us inside the refugee camp of Yarmouk, just south of central Damascus, where the Syrian army has nearly regained control. 5:38

“I think that matters were presented in a direct and forthright manner, and this is important. These matters are very important to Israel’s security at all times and especially at this time,” he said.