Over the course of seven weeks, the script became familiar: Unarmed Palestinians marched toward the fence separating Gaza from Israel, calling for freedom. Meanwhile, Israeli soldiers used live ammunition and tear gas to protect citizens on the other side of the barrier.

What actually played out over several Fridays of protests, which peaked last week when 62 Palestinians were killed by Israeli forces on the same day the United States controversially moved its embassy to Jerusalem, is much more complex.

As both sides in the long-running Israeli-Palestinian conflict assess the fallout from last week’s events, many have concluded that Hamas, the militant group that controls Gaza, won the latest round in an equally long-running propaganda war.

The Israeli military’s international media spokesperson said as much in comments attributed to him by the left-leaning Israeli daily Haaretz.

“We haven’t been able to get that message out of how it is from our side, what we are defending – and the ‘winning picture’ overwhelmingly, by a knockout, unfortunately, have been the graphics from the Palestinian side,” said Lt. Col. Jonathan Conricus, according to Haaretz.

The Israelis and Palestinians have for decades used imagery to try to win over international opinion. Arguably the “winning picture” from this latest bout of violence showed a grandmother holding the body of a baby girl.

According to relatives, eight-month-old Layla Ghandour was asleep at the family’s home in Gaza City when a relative bundled her up and carried her aboard a bus bound for the demonstrations near the border fence on May 14.

That day, Israeli forces on the other side of the barrier used live ammunition and tear gas to try to push crowds of demonstrators back from the barrier.

Ghandour’s family said Layla inhaled a whiff of tear gas, which caused her to start choking. She died later in a Gaza hospital, surrounded by grieving relatives.

Images of the lifeless body of baby Layla began circulating on social media, and were quickly picked up by news agencies around the world. It was another image of a child caught up in conflict in the Middle East, reminiscent of the photo of Alan Kurdi on a Turkish beach or Omran Daqneesh, covered in blood and dust in Aleppo.

A funeral was held for Layla in Gaza, with angry family members accusing Israel of killing the baby. Similar sentiments were echoed by cable news pundits, as evidence of excessive force at the hands of Israeli forces. 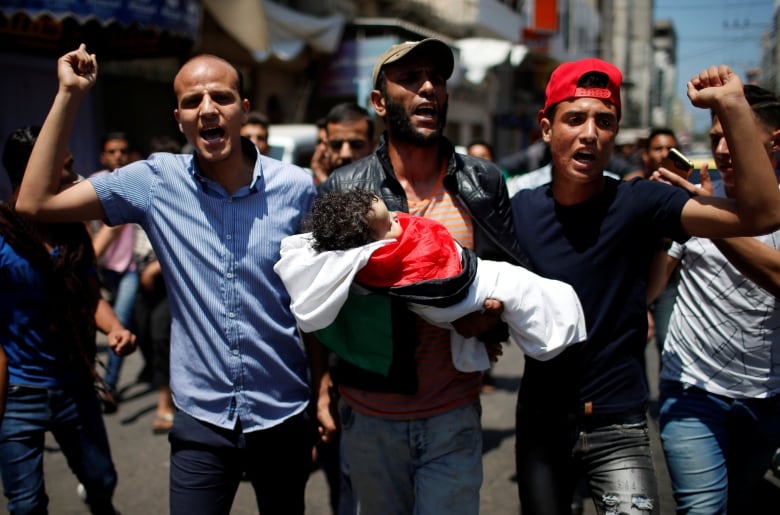 But not long after came the charge of “fake news.”

Israel’s military said it had “several testimonies,” which it did not detail, that called into question the family’s claim that tear gas was the cause of death.

A Gaza doctor told The Associated Press that Layla suffered from a pre-existing medical condition, adding that he did not believe that she died of gas inhalation.

“But even after credible, respected international news organizations were casting doubt on this story, others, including very, very prominent broadcasters, were still leading with this story,” said David Horovitz, founding editor of the current affairs website Times of Israel.

An image of Layla Ghandour was posted on the Facebook page of the main spokesperson of the Hamas-run Ministry of Health in Gaza, featuring a photo of the baby with sparkling green eyes and a white bow in her hair.

As the violence intensified last week, both Hamas and the Israel Defence Forces ramped up their social media feeds to get their messages out.

This post from Hamas accuses Israel of terrorism with the killing of “unarmed demonstrators.”

Hamas can turn anything into a weapon of terror. <a href=”https://t.co/7v8RmGfN4o”>pic.twitter.com/7v8RmGfN4o</a>

Horovitz said the polarization of narratives from both sides combined with the complexity of the story is why solid reporting is now more critical than ever. 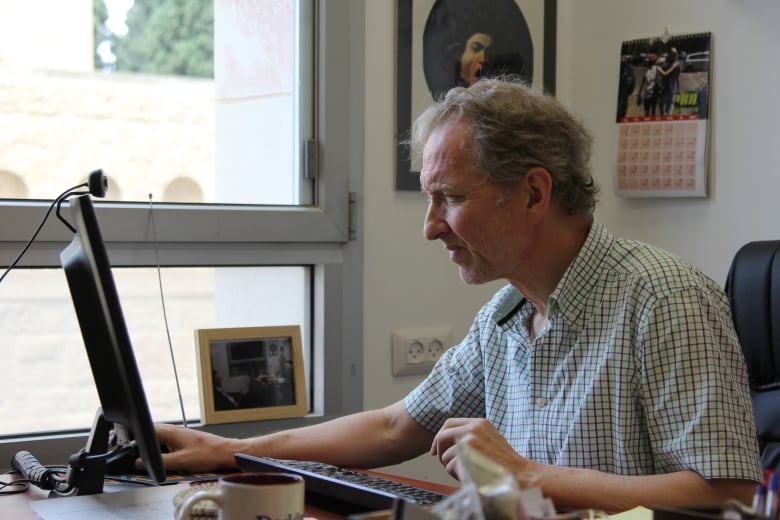 David Horowitz, editor of the Times of Israel, said that now more than ever, the complexity of the Israeli-Palestinian conflict demands journalists be accurate. (Derek Stoffel/CBC)

The protests in Gaza, which began on March 30, were initially organized to highlight the dire humanitarian conditions in the Palestinian territory, as well as to call for the right of Gazans to be allowed to return to ancestral homes in what is now Israel.

Some residents of Gaza accused Hamas of co-opting the demonstrations, which were initially advertised as being non-violent.

Now that Hamas has been successful in refocusing the world’s attention on the plight of the Palestinians, at least for a time, the leadership of the militant group — which is deemed a terrorist organization by Canada, Israel and the U.S. — is plotting how to keep the spotlight on Gaza.

“These marches will continue until our people achieve their goals in full,” said Yahya al-Sinwar, the leader of Hamas in the Gaza Strip.

While Hamas savours what it sees as a public relations victory over Israel, some Palestinians ask, at what cost?

“I think it’s a big win on the Palestinian side. However, that was extremely expensive,” said Ghassan Khatib, a former spokesperson for the Palestinian Authority and currently a political scientist at Birzeit University near Ramallah.

“Palestinians have lost more than 60 young people. I think that this is a very, very heavy price.”