Two years after a record–setting wildfire, Fort McMurray is still in recovery mode, with the majority of residents whose homes were destroyed or damaged still displaced, the region’s mayor says.

“I think [the recovery] is going to take a couple of years,” Don Scott, mayor of the Regional Municipality of Wood Buffalo, said in an interview days before the wildfire anniversary. “We are far from being beyond this.”

The Fort McMurray wildfire began on May 1, 2016, but it was two days when the flames reached the city, forcing more than 80,000 residents to flee, in what is now known as one of Canada’s largest evacuations.

When the month–long evacuation was over, residents returned to find more than $3.7 billion in damage, making it Canada’s costliest disaster, according to the Insurance Bureau of Canada.

The latest numbers show that as of Monday, 20.28 per cent of damaged homes have been rebuilt.

According to the regional municipality, 523 of 2,579 homes have been rebuilt and passed final inspection.

There is little the municipality can do to hasten the reconstruction since most rebuilds are held up by insurance settlements, Scott said.

Neil Wood’s four-bedroom bungalow with a basement in the subdivision of Beacon Hill will meet the second anniversary of its destruction with only a foundation and wood frame.

Neil Wood talks about his four-bedroom bungalow in the subdivision of Beacon Hill on April 30, 2018. (David Thurton/ CBC)

Wood said he’s been stalled by his insurance provider after they couldn’t come to an agreement over the final value of the contents that were destroyed, even though he said he had over $1 million in coverage.

“Insurance has been interesting. People need to read the fine print,” Wood said

After losing her house in last year’s wildfire, Fort McMurray resident Denise Hurley is moving into her new home. 0:56

Most of the claims have been settled and only complicated ones remain, said Rob de Pruis, western director for consumer and industry relations for the Insurance Bureau of Canada.

The bureau said it didn’t have any more recent statistics.

‘I will fight to get it open’

Two years ago on May 3, Gareth Norris saw wildfire smoke rising in the distance of his Irish bar, Paddy McSwiggins, in Thickwood.

He immediately urged patrons, many holding a beer in the parking lot on a sweltering May day, to evacuate. 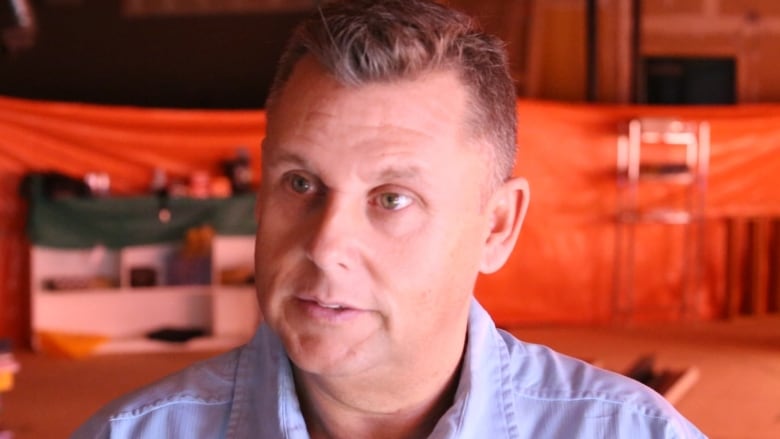 When Norris returned to his business after a month long evacuation, it stunk of wildfire smoke and was coated in ash.

His claim is one of 5,000 commercial insurance claims filed after the wildfire.

Despite attempts to have the restaurant professionally cleaned, the stench persisted. The popular local haunt hasn’t opened since the wildfire.

Norris is now in a battle with his insurer to pay for the cost to gut and replace the restaurant’s wood interior.

“We thought maybe in three, maybe four months, we would be up and running,” Norris said. “It has been shocking. I really hadn’t predicted this at all.”

Norris continues to pay rent for a business that hasn’t generated any income for two years, but despite the loss the bar owner said he’s staying in the city for the long haul.

“This is home. This is how I feed my kids. This is how we pay our mortgage,” he said. “I have no desire to go anywhere else. I will fight to get it open.”