The entire day is recess for a small group of kindergarten kids in Parkland County on Tuesdays, Thursdays and every second Friday.

The kids head to Chickakoo Lake just north of Stony Plain as a part of a nature-based extension program.

The program’s lead educator, Janette Radchenko, said the learning is based on the children’s curiosity.

“We explore and find different parts of nature,” Radchenko told CBC’s Radio Active. “Each day is different and we just kind of go from there and see what we find.”

Kids that are a part of a Kindergarten extension program in Parkland County get to learn about the natural community around them. 5:29

Radchenko goes into each day with a plan but that can get derailed quickly depending on what the kids want to explore — which is welcomed.

Last Thursday, the students saw a snake slithering through the grass, a beaver swimming in the lake and geese flying away. Then, they found some freshwater shrimp in the lake.

“[I] played with real-life shrimp,” Lincoln, 5, said. “Fresh from the lake over there.”

Chickakoo Lake, where the kids have found freshwater shrimp and seen beavers and geese. (Tanara McLean/CBC)

But the kids’ days don’t only consist of finding moss and “baby trees.”

“I was actually building a fort,” Nya said.

“I was digging with my foot until we started playing zombies,” Lincoln said.

It’s all part of the loose curriculum for the students, Radchenko said.

“A lot of the kindergarten expectations is working with peers, having that co-operation, the independence,” she said. “Basically, we’re taking that and bringing it outside.”

The program gives the kids a different perspective on the communities that surround them, Radchenko said. Indoor classes often talk about members of the community like police officers and firefighters, but focus less on the natural community around them.

That’s where Radchenko hopes the program comes in. “It’s sort of the same idea but taken in a different direction,” she said.

For some kids who have a tougher time in the classroom, Radchenko said the nature-based classroom is a positive environment for them. 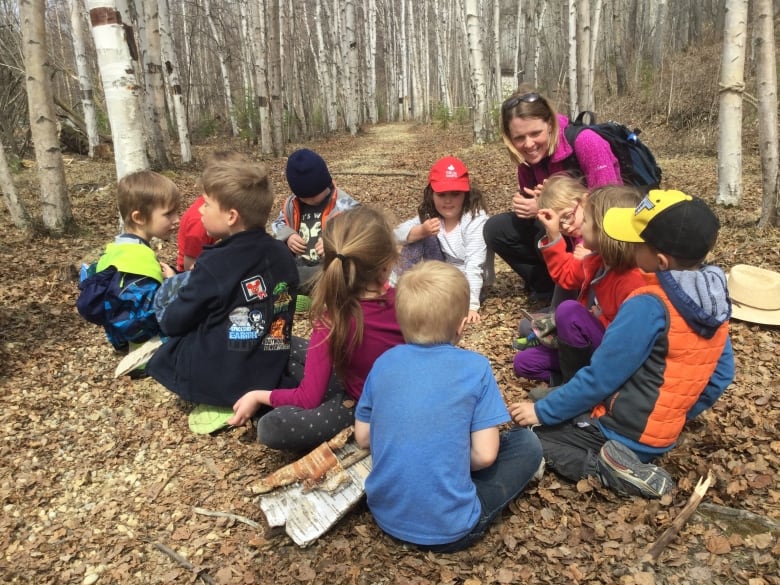 Radchenko loves her job and the freedom it gives to the kids who participate in it. (Tanara McLean/CBC)

“It’s hard to pinpoint who those children are because they have the freedom,” she said.

As for her job, Radchenko said coming to teach the kids and not knowing where the day will lead them is rewarding.

“The days that I come out here are exciting every morning,” she said. “This is the best job a person could ever have.”

More information on the program is available here.