Randy Thibeault is confident his truck could survive the apocalypse.

Lovingly named Tankentruck, the big black-and-neon rig roars and sputters like a race car, and looks like it drove straight off the set of Maximum Overdrive.

The modified truck was inspired by Thibeault’s love of the man-against-machine Stephen King classic, and other dystopian films where steel and chrome loom large.

He said his mean ride would win a battle against the zombie-proof tanks of the Walking Dead series, and the desert war machines of Mad Max.

“Once I’m in the truck, have fun knocking me off, because I’ll run over everything,” Thibeault said with a chuckle.

Randy Thibeault has been working on his camper-truck contraption for nearly a decade.

“I think I would take them both on at the same time.”

The truck is built from an old farm pickup equipped with a flatbed camper. But its other modifications are unusual.

The interior is wired with more than 60 electrical plugs for Thibeault’s power tools. The exterior has been clad with matte black, menacing neon-green and macabre knick-knacks like skulls. It runs on a full-power racing engine.

“Sometimes people look at it like it’s a piece of junk,” he said. “I get one per cent like that. And other people want to take pictures.”

The Edmonton man has spent thousands of dollars, and more than eight years, working on various iterations his design. The first version was ripped apart in the 1987 tornado. Others were scrapped because they just didn’t look right.

Thibeault used a modelling program at the Edmonton Public Library’s Makerspace to come up with his latest blueprints.

“I keep adding pieces to it, because I know what I want to do with it,” Thibeault said.

“I need a tool box but I also need a camper, and between the two I had to figure it out. It’s more of a toolbox than it is a camper.”

‘Beefing the truck right up’

While Thibeault is confident his truck could withstand the end of the world, it can only drive for about three kilometres before the engine sputters out. 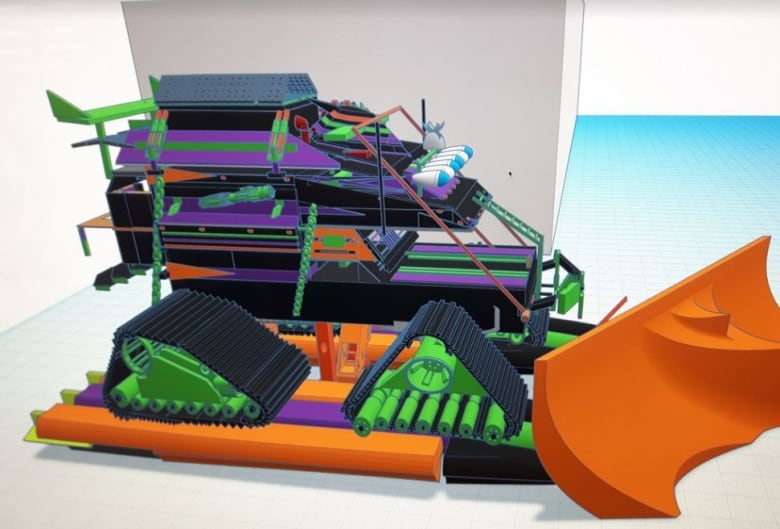 He used a modelling program at the Edmonton Public Library’s Makerspace to come up with his latest blueprints. (Randy Thibeault)

The rig is currently parked near his home in north Edmonton, but he wants to get it fully road-ready for a cross-country trip.

“Another eight grand or another ten grand, anywhere in there will suit me fine,” he said.

After eight years spending his summers as a landscaper and excavator driver in Fort McMurray, he’s ready to ease up the throttle on his working life.

“That’s why I’m beefing the truck right up. I’m putting heavy-duty springs on it. I’ve got to find a gas tank. I need 163 gallons to go home, back to Ontario.