Two weeks after Dan Meyer retired from his work operating hockey goaltending schools across North America, he sat around the house and quickly realized full-on retirement wasn’t for him.

Get a glimpse into the life of a professional dog walker in Edmonton. 5:46

Since he walks his two dogs at the Terwillegar Dog Park anyway, Meyer decided to add a few more dogs to his leash.

He walks between eight and 12 dogs at a time, depending on the temperament of the dog. “If I have dogs that require more attention, tend to run off or have regression issues, then I’ll cut down the number of dogs so I can pay closer attention to them,” Meyer told CBC’s Radio Active.

Meyer picks the dogs up and takes them for an hour-long walks. He said picking the dogs up can be a bit tedious, but the reward is getting to spend the day with all the dogs together.

“I’m the guy that takes them for a walk and gives them lots of treats and so I don’t have to so any of the mundane stuff,” he said.

After his previous life as a goalie school operator, Meyer said walking dogs is a nice change of pace.

“The thing I like most about the dog-walking business is that none of the dogs or their parents think they’re going into the NHL,” he said.

“Look at these guys. This is my office. This is the greatest job in the world.” 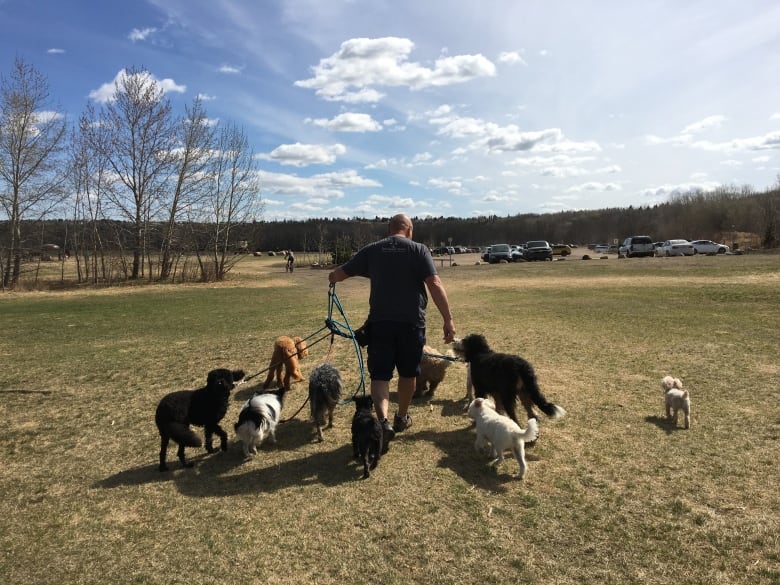 Meyer says walking these dogs is the greatest job in the world. (Emily Rendell-Watson/CBC)