A man killed two police officers, both women, as well as a male bystander in the Belgian city of Liege on Tuesday before being gunned down at a school in what officials say was a terrorist attack by a radicalized “lone wolf” just out of prison.

An earlier report said the two officers were men.

The national crisis centre, on high alert since past attacks by Islamic State in Iraq and Syria (ISIS) in Paris and Brussels, was activated after Tuesday’s attack in Belgium’s fourth largest city.

The man was named by public broadcaster RTBF as Benjamin Herman, a 36-year-old petty criminal and drug dealer who was let out on day release Monday. A Belgian lawmaker said he had been on an anti-terrorist police watch list after being radicalized in jail, apparently as a convert to Islam – raising questions about why he seems to have been freed unsupervised and was expected to return.

Officials said the attack on the police officers, 45 and 53, was around 10:30 a.m. on a boulevard in the centre of Liege, near the German border. After slashing the officers with what RTBF described as a box-cutter, the man seized their handguns and shot them both.

Several police were also injured before the gunman was shot dead 0:41

“The goal of the assassin was to target the police,” Liege police Chief Christian Beaupere told a news conference.

He next shot dead a 22-year-old trainee teacher who was sitting in a car before entering a high school about 100 metres away, and took two female employees hostage.

The man then made his way into a high school, where he took a woman employee hostage, triggering a major intervention by armed police. Pupils were moved to safety as a gun battle broke out that sent people in the street racing for cover. Several police were wounded before the attacker was finally killed.

Police officers speak with parents of children at a nearby high school in the eastern Belgian city of Liege on Tuesday after a man killed three people, including two police officers. (John Thys/AFP/Getty Images)

“The event is classed as a terrorist incident,” Philippe Dulieu, a public prosecutor, said at a new conference earlier.

Confirming that the attacker was on the police watchlist, lawmaker George Dallemagne, who sits on several Belgian parliamentary security committees, tweeted: “The supervision of radicalised prisoners remains tragically flawed.”

Images posted on social media showed elements of the drama: What appeared to be the bodies of the two police officers, arms bare on a hot sunny morning, wearing protective vests and lying in pools of blood a couple of metres apart outside a cafe; the gunman, dressed in black, waving a pistol in each hand, standing in the middle of the road; and finally the assailant emerging from the school onto the street, firing on police, who gun him down. 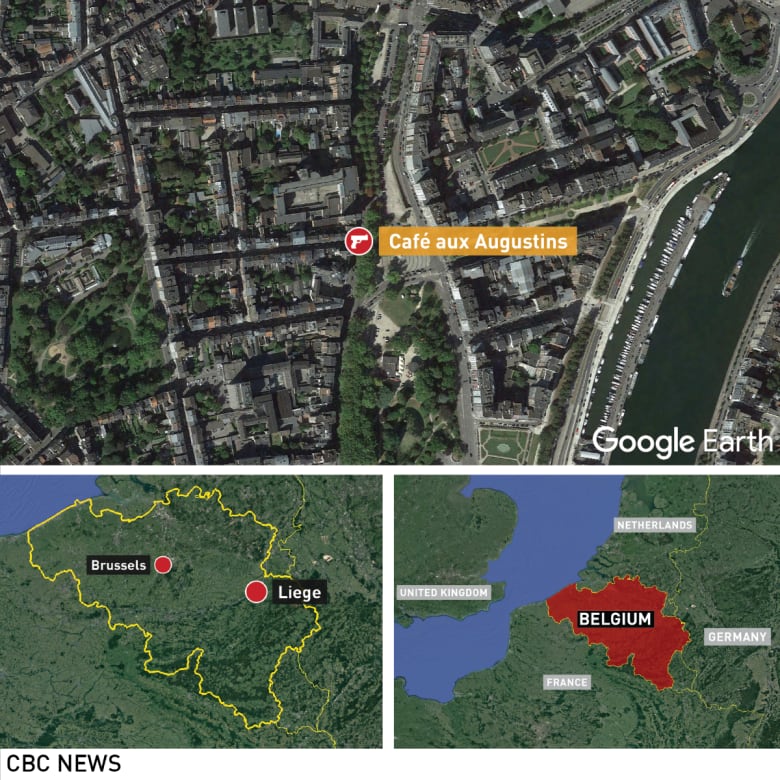 The attack Tuesday occurred in the eastern city of Liege, located near the German border and with a population of just under 200,000. (Google)

Prime Minister Charles Michel and King Philippe visited Liege, the biggest city in Belgium’s French-speaking Wallonia region. An industrial hub on the Meuse River, it was the scene of a mass shooting in 2011, when a man killed four people and wounded over 100 others before turning his gun on himself.

Belgium has been on high alert since a Brussels-based Islamic State cell was involved in attacks on Paris in 2015 that killed 130 people and Brussels in 2016 in which 32 died.

The Brussels ISIS cell had links to militants in Verviers, another industrial town close to Liege, where in early 2015 police raided a safe house and killed two men who had returned from fighting with radical Islamists in Syria. 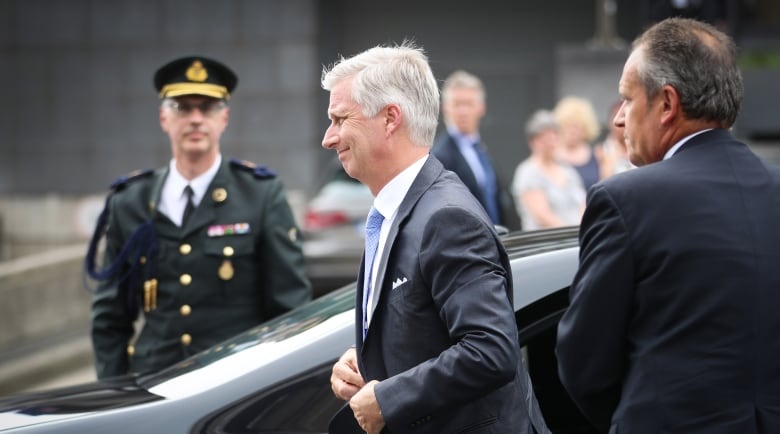 King Philippe of Belgium arrives for a meeting at the Liege police office. (Virginie Lefour/AFP/Getty Images)