Larson isn’t personally running against the NDP MLA. But she is managing the campaign of United Conservative Party MLA Todd Loewen, McCuaig-Boyd’s likely opponent in the redrawn northern Alberta riding of Central Peace-Notley.

Loewen’s current riding of Grande Prairie-Smoky was eliminated in last fall’s boundaries commission report, leaving him looking for a new riding to run in.

That means two incumbent MLAs are poised to go head to head in the 2019 provincial election, expected to be called within the next year, in the vast new Peace Country riding that includes the towns of Fairview, Spirit River, Valleyview and Fox Creek.

Larson insists Loewen has a great chance of coming out on top.

“We’re hoping to capitalize on that long-standing, conservative vote that has been in this area,” she says.

When the NDP won their first and only majority Alberta government in 2015, seven of their 54 MLAs were elected in rural areas in the north and central parts of the province.

The race between McCuaig-Boyd and Loewen will be watched closely as a key test of the NDP’s ability to hang on to the seats they have in Alberta’s traditionally conservative rural areas.

Loewen, a former outfitter and taxidermist, was first elected in 2015 as a Wildrose MLA, after previously losing to Progressive Conservative candidates in 2008 and 2012. The low-key yet personable MLA finally broke through in a close three-way race where the NDP candidate trailed him by just 334 votes.

When asked about his chances running against McCuaig-Boyd next year, Loewen was optimistic.

He says he’s heard remorse from some people who voted NDP last time, which he hopes could also boost his chances. People are not happy with the carbon tax and implementation of the farm safety bill, he said.

“There could be other dynamics come into play, we’re still a year away from an election, but I think it looks pretty good as far as the United Conservative Party going ahead,” Loewen said.

‘I am hearing the frustration’

Loewen was recently in Grande Prairie on one of the week-long breaks the legislature takes from its daily sittings.

This particular day was filled with typical MLA duties: meeting with a constituent in his office in the Crystal Lake area of Grande Prairie, attending a Rotary Club luncheon and delivering a plaque with the Alberta coat of arms to two new schools in his riding.

Loewen lives on a farm south of Valleyview, so running in the next election in Central Peace-Notley instead of the new more urban Grande Prairie riding seemed to make sense. 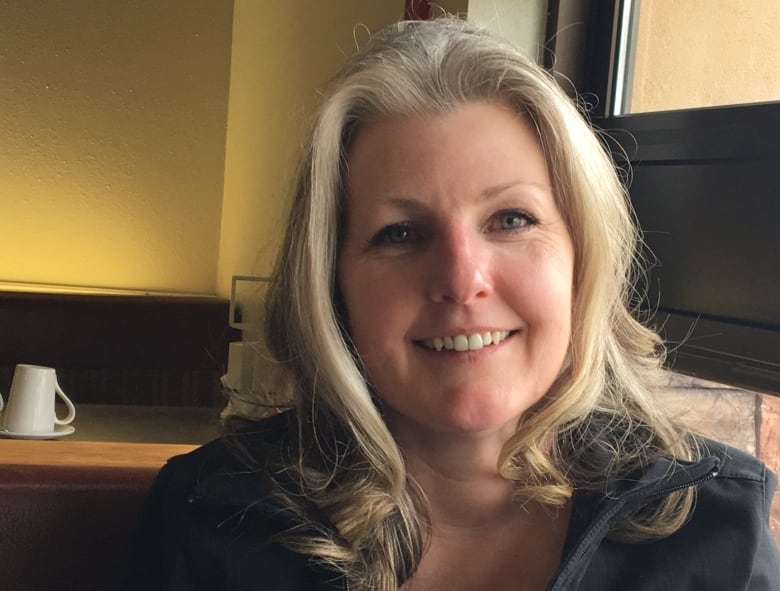 Loewen is no stranger to McCuaig-Boyd’s constituency. He has made trips there for legislature business and visits from former Wildrose leader Brian Jean and current UCP leader Jason Kenney. He says he’s also met with people who don’t feel comfortable talking to an NDP MLA.

When asked about running against McCuaig-Boyd, Loewen avoids criticizing her personally, focusing instead on the record of her party, arguing the NDP is out of step with rural Albertans.

“When people go and talk to their MLA, they’re kind of hoping for a like-minded person and understand the concerns that they have,” he said. “And of course, I think the NDP has missed the mark on a lot of things and that’s not personal towards Marg, I think that’s an issue that the NDP (has) and Marg represents the NDP in the area.

“I think there’s a disconnect with the people there because I am hearing the frustration.”

‘I saw the best MLA first’

If McCuaig-Boyd is concerned about the competition from Loewen, she doesn’t show it.

During the constituency break, she went on a day-long trip through central Peace Country, from the town of Rycroft west to the B.C. border.

McCuaig-Boyd toured a Trans Canada construction site west of Spirit River, visited an early childhood education program at Blueberry Mountain, and delivered a cheque to the agricultural society in Bonanza to help them grow their summer fair.

In Rycroft, McCuaig-Boyd posed for a photo beside a rail car filled with pipe, bound for construction of Trans Canada’s 25-kilometre Saddle West expansion of a natural gas pipeline.

“The pipe came from Saskatchewan, but they’re going to be welded and those are going to be jobs in our area, and all the pipefitters and people who work in the pipeline industry,” she said.

A former school principal and vice-president of Grande Prairie Regional College, McCuaig-Boyd has lived in the Fairview area since she moved to there as a young teacher. 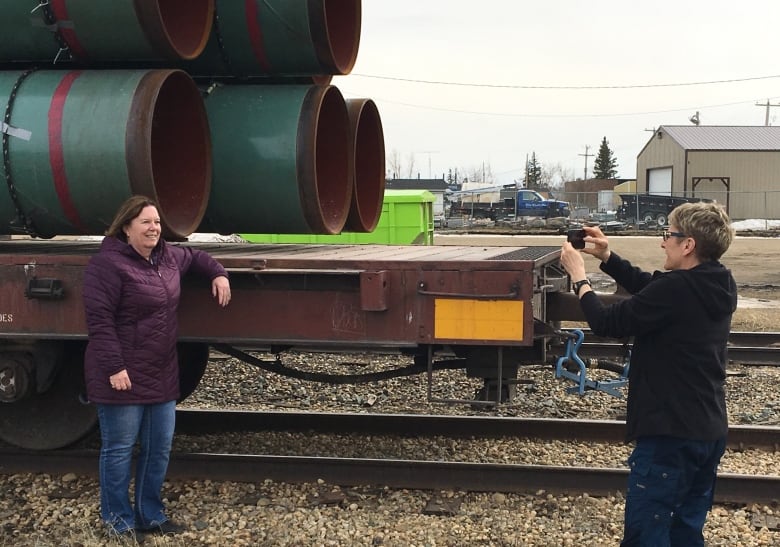 Marg McCuaig-Boyd poses for a photo beside a rail car stacked with pipe in Rycroft, Alta. The pipes were bound for a natural gas pipeline in her riding of Dunvegan-Central Peace-Notley. (Michelle Bellefontaine/CBC News )

She has a long connection with her current boss, Premier Rachel Notley, whose father Grant Notley, also a former NDP leader, inspired her to become involved in politics.

McCuaig-Boyd met the elder Notley, who was then the MLA for Spirit River-Fairview besides being the Alberta NDP leader, when a teaching colleague took her to a political meeting.

“I was quite taken by him,” McCuaig-Boyd said. “He was a very special man. I always say I saw the best MLA first.”

Grant Notley served as the area’s MLA from 1971 until he was killed in a plane crash in October 1984.

Although NDP candidate Jim Gurnett was able to keep the seat in a 1985 byelection, it was won by the Progressive Conservatives in the 1986 general election and stayed that way until McCuaig-Boyd’s victory in 2015.

Looking back, she thinks her win was due to her ability to capture support from younger voters.

“I do know for a fact for some of them it was the first time they had voted because I convinced them,” she said. “I reminded them when I was their social studies teacher that I said voting matters.”

When asked how she plans to counteract the NDP’s image as an urban party, McCuaig-Boyd said issues like health care and education are important to rural people as well.

“People move to communities for certain things,” she said. “Good schools, good hospitals or good services. And that’s really what we’re about.”

‘You have to get this part right’

A split of the conservative vote between the Wildrose and Progressive Conservative candidates in 2015 was cited as a factor in the NDP victory in 2015, and fear of further vote-splitting across the province helped motivate the merger that created the United Conservative Party last summer.

In Dunvegan-Central Peace-Notley, McCuaig-Boyd received 3,692 of the votes cast in the 2015 election, 38 per cent. The Wildrose candidate came second with 3,147 votes and the PC candidate was third with 2,766.

Larson says she considered running herself in the next election but decided to throw her support behind Loewen because he will have four years of experience as an MLA. 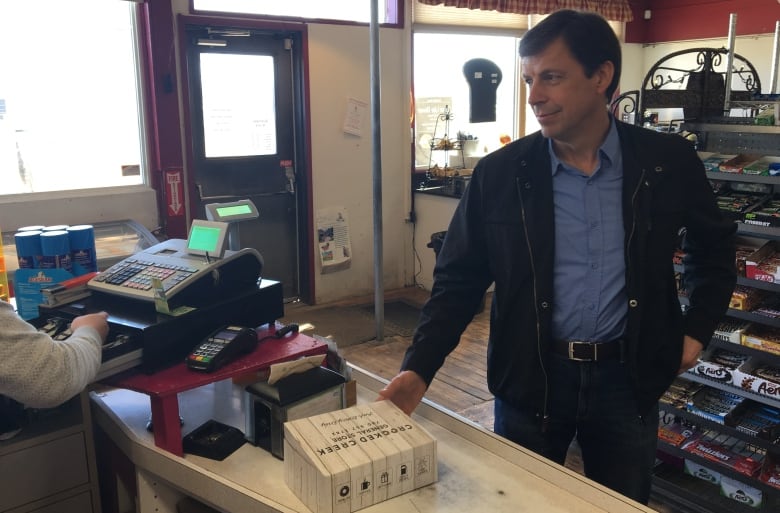 Now that she is his campaign manager, Larsen is already at work reconnecting with people and organizations that have supported conservatives in the past.

“You have to get this part right,” she said. “You may not be happy with the (UCP) leader that was elected. But he’s the leader that we have, he’s doing the damn best job he knows how to do.