Debris from the 2011 Japanese tsunami that landed in North America has delivered marine life never seen in the region.

A magnitude 9.1 undersea earthquake created a massive tsunami off the coast of Honshu, Japan’s main island, that travelled as far as 10 kilometres inland. Thousands of people were killed, and the rushing water tore apart wooden buildings and homes. Eventually the flood  pulled the floating debris into the Pacific Ocean.

Scientists knew some debris could make it the approximately 7,500 kilometres east to the western shores of North America, but they had no idea how much.

Researchers looked at a 1933 tsunami of the same magnitude that occurred in roughly the same region. But the 2011 event produced much more debris.

“We think that earlier tsunamis were contributing mostly, to the ocean, essentially biodegradable material: wood and trees which don’t last nearly as long, of course, as does the plastic material,” James Carlton, lead author of the paper published in the journal Science, told Bob McDonald of CBC Radio’s Quirks and Quarks.

And on that material researchers found 289 marine invertebrates and two species of fish. It was somewhat of a surprise that life survived the ocean crossing for up to four years from 2011 to 2015.

Objects from the trunami began to arrive in 2012 in Oregon. They also showed up on Vancouver Island.

That year, Karla Robison, environmental and emergency service manager in Ucluelet, B.C., set up a monitoring station based on standards set out by the U.S. National Oceanic and Atmospheric Administration.

In March 2013, she and a group of students surveyed the site. Robison found a post, while the second group found a beam. 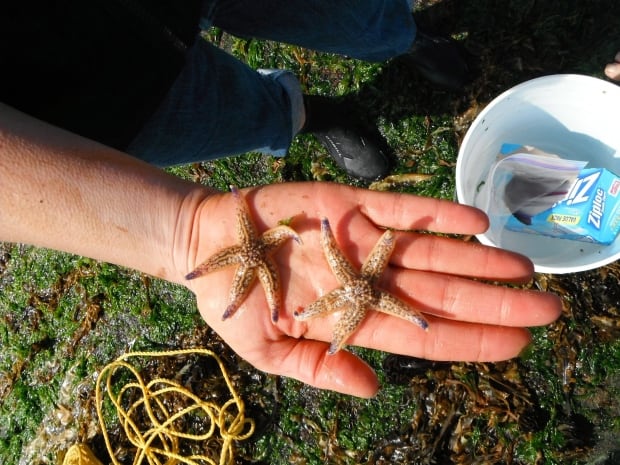 Attached to debris they found a little mussel. Robison knew that this was important.

“OK, we found something here,” she remembers thinking. “And this isn’t from around here, and … there’s some marine life on it.”

The District of Ucluelet sent collected marine animals for analysis to Carlton, Oregon State University and Canada’s Department of Fisheries and Oceans. Mussels, rose and thatched barnacles, Japanese oysters, shipworms, a mystery clam and red algae have been discovered around Ucluelet.

“Most of the species were, in fact, novel and not found in North America or the Hawaiian islands,” Carlton said. 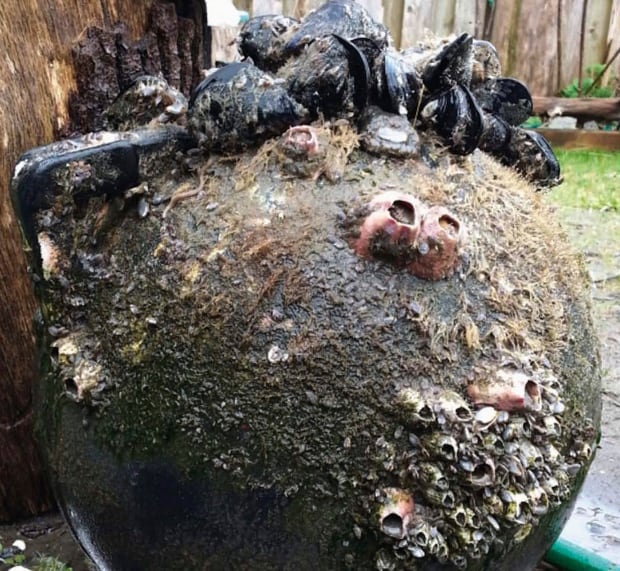 They were found inside boats, attached to beams and on buoys and crates.

Many of the species were already on the objects before they were washed into the ocean, Carlton said. But marine life, too, colonized some of the debris, which came in many shapes and sizes. Two large docks even made their way to North America. The first piece, which arrived on the coast of Oregon in 2012, was colonized by more than 100 living Japanese species. The second one, which arrived in Washington state, had about 50 species on board.

‘Tens of thousands of mussels’

“When that first dock arrived, it was just 100 per cent covered with tens of thousands of mussels from Japan, and just draped with kelp,” Carlton said. “How many species started the trip we don’t know and how many were lost in the tsunami is hard to know.” 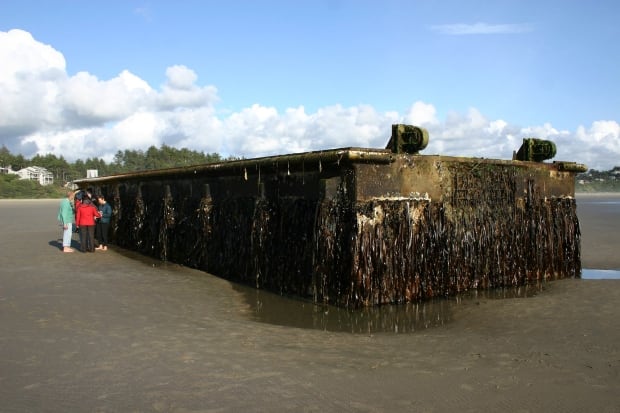 A Japanese dock covered with marine life from Japan washed up on the Oregon coast. (James Carlton)

Carlton said the main concern is finding species that have no history of invasion.

“This is basically ecological roulette,” he said. “We’re bringing in a lot of species that perhaps had no previous history of being invasive. But finding themselves in a new region could be problematic once released from their predators and competitors.”

While there’s no sign of that yet, he told McDonald, it could take years before they build up to a point where scientists can detect them.

Robison said the findings illustrate our truly global environment and emphasize the need to reduce plastics.

“It is an international issue,” she said. “The ocean definitely showcases that we’re all interconnected. There’s no boundaries out there with the ocean. We’re all in this together.”