For the first time, the Canadian Armed Forces is opening its doors at every reserve armoury across the country in an attempt to boost its dwindling part-time force.

At more than 100 open houses, recruiters will pitch a new expedited enrolment process and guaranteed summer jobs for students. Reserve units will try to wow would-be members with demos of artillery equipment and combat training, as well as displays from medics, engineers and weapons technicians.

Col. Thomas Mackay, director of the Canadian Army Reserves, attributes the shrinking force in part to a strong economy that offered part-time reservists other opportunities, as well as the end of the Afghanistan mission.

“After the Afghanistan mission ended, I think there was a period where a lot of soldiers probably looked around and said, ‘Well, that might have been the best [mission] we were going to have, and now there’s nothing on the horizon,'” Mackay said.

“You know, these are all volunteers — they can leave the force any time,” Mackay said. “If the training isn’t delivering to their expectations, if they’re not getting the experience that they hoped to get out of the institution, then yes, the person is likely to leave.”

Mackay says the mantra right now is “Recruit until you cannot recruit anymore.”

Part-time reservists are given the choice to sign up for domestic missions, such as fighting forest fires in B.C. or sandbagging in Quebec during floods, or they can volunteer for overseas missions. A reservist cannot be deployed overseas unless he or she volunteers to do so.

Most of the regiments in Western Canada are staffed at below half of a full contingent.

At the Regina Armoury, the 10th Field Artillery Regiment has just 30 reservists — less than a third of its target of 100. Overall, Saskatchewan has lost about 150 reservists in the past two years.

“Essentially, we don’t have the training and experience, then, to support those domestic operations,” Capt. Jon Cober, operations officer for the 10th Field Artillery Regiment, told CBC News. “As well, the ability to support international operations will suffer.”

Cober shied away from the word “desperate” to describe the recruitment efforts, but said this: “At the moment, I think we’ll pretty much take anybody who comes in. We’re really looking to expand the numbers.”

Last year, a scathing auditor general’s report revealed that Canada’s army reserve only has a fraction of its troops properly trained, equipped and fit for international operations and domestic emergencies.

Michael Ferguson’s audit found that of the 21,000 army reservists on the books, only about 14,000 were considered active and ready for service.

At the same time, the Canadian Army Reserves has launched its own 12-point plan to strengthen its forces, including plans to restock equipment and develop units that specialize in areas such mortar combat or chemical defence, for overseas deployments.

When Sgt. Elliot Windl was 16 years old, a recruiter visited his high school in Regina. He was lured in by the promise of “driving big trucks and learning how to use howitzers,” he said, referring to the famous cannons.

Over the next 18 years, he balanced a part-time job as a reservist with his other jobs as a restaurant cook, shipping clerk  and stay-at-home dad. 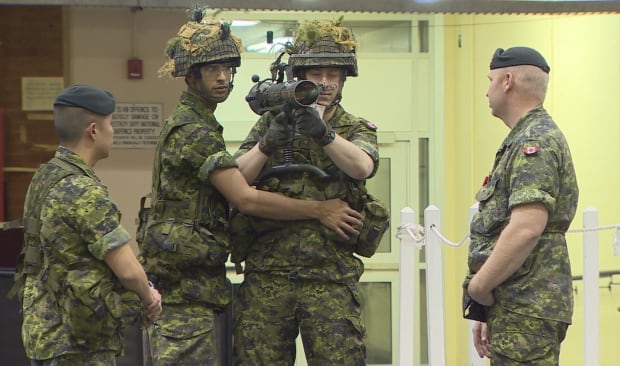 Saskatchewan has lost nearly 30 per cent of its reservists in the past two years. (CBC News)

Now, he’s the full-time recruitment officer for the 10th Field in Regina.

He expects that some of the army’s new initiatives will make signing up more enticing.

For example, they want to get recruits enroled in just three visits compared to the previous six- to 12-month process. That will also speed up how quickly recruits get paid.

“It just helps with them, saying, ‘This is something that I can do…. I can balance my education and work. I don’t have to worry about getting two or three part-time jobs to pay the bills.'”