Who would have guessed that 2001’s “Wet Hot American Summer,” a film that Roger notoriously hated, would develop such a loyal cult following that it would be brought back not just for a traditional sequel but two seasons of episodic television on Netflix? 2015’s “Wet Hot American Summer: First Day of Camp” was a clever send-up of nostalgic returns to old stomping grounds, playful in its very existence, reuniting the now-older cast to play younger versions of their original characters. Now we’re given the satirical lunacy of “Wet Hot American Summer: Ten Years Later,” a send-up of, well, too many things to count. What’s fun about these series is the infectious sense of community they’ve engendered by reuniting their great casts as often as they have. In one of the later episodes, someone says “We can’t be teenagers forever.” But they can sure have as much dumb fun making a TV series as they did when they were younger.

“Ten Years Later” gets almost everyone from the original film and first series back for a reunion, a decade after the action of the film. So the show actively sends up the early ‘90s in fashion and pop culture, but eventually gets us back to Camp Firewood, where everyone gets a subplot for the season. Katie (Marguerite Moreau) is finally going to tell Coop (Michael Showalter) how she feels about him. Victor (Ken Marino) is still a hysterical virgin, but the reunion offers him a chance to lose that status. McKinley (Michael Ian Black) and Ben (Adam Scott, replacing Bradley Cooper and offering a funny bit in which his new looks are excused through surgery for a deviated septum) are still a couple, and they bring along a baby and a new nanny (Alyssa Milano), allowing for a send-up of the “crazed nanny” craze of films in the early ‘90s like “The Hand That Rocks the Cradle.” Beth (Janeane Garofalo) may have to sell the camp; Mitch, the talking can of vegetables (H. Jon Benjamin), is back; Susie (Amy Poehler) has become a famous producer and brings a new actor-boyfriend (Jai Courtney); Presidents Bush and Reagan play major roles—it’s all inspired lunacy. 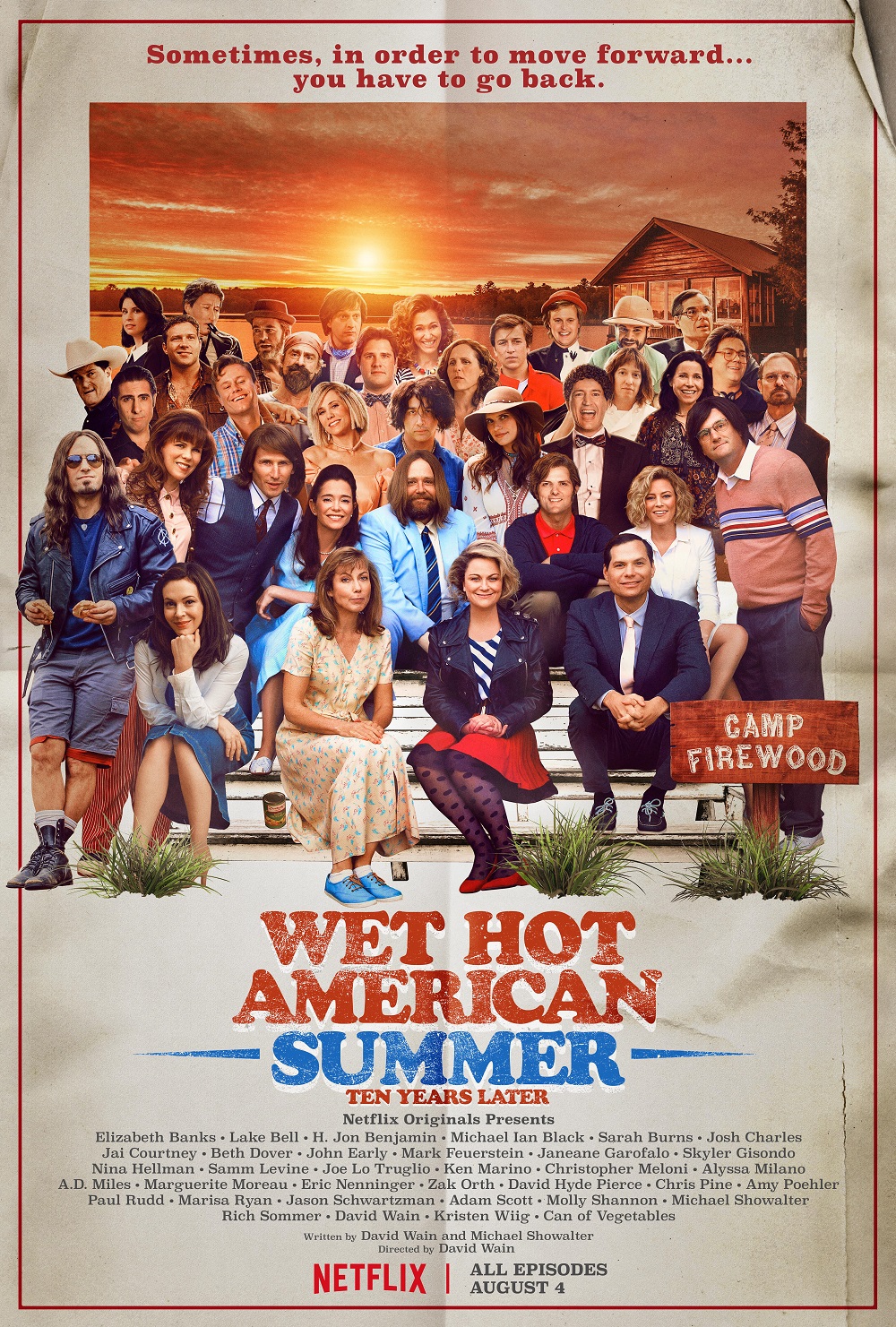 All comedy is subjective, but that of David Wain, who directed all eight episodes again, feels particularly so. Again, he subscribes to a comedic model that could be considered derivative of the Zucker brothers on films like “Airplane!” in that the jokes-per-minute rate is as high as conceivably possible. Don’t like a joke; wait a few seconds and you’ll get another. And this year allows Wain and company to send-up reunion movies like “The Big Chill” and “St. Elmo’s Fire” alongside their very particular sense of humor. It’s a series that brilliantly slides back and forth between intelligent satire and ridiculous physical comedy—there’s a bit with Showalter dressed as Reagan and Black as Bush that involves defecation that has to be seen to be believed. It is a sense of humor that’s constantly calling attention to itself, almost winking and nudging the viewer with a “Get it?!?!” While that kind of comedy can be grating in the wrong hands, there are so many talented people having so much fun here that it’s hard not to just submit to the ride. Not only are the regulars as funny as ever (Marino is particularly amazing) but familiar faces pop up over and over again, including some characters you thought dead and some new ones played by Melanie Lynskey, Dax Shepard, and, believe it or not, Marlo Thomas.

It’s this simple really: all eight episodes of “Wet Hot American Summer: Ten Years Later” made me laugh, some as hard as anything on TV this year. For me, literally everything Paul Rudd and Chris Pine do in this series is funny, but I’m sure everyone will have their own favorite characters and scenes. Overall, it’s broad, ridiculous, silly humor that isn’t as daring or progressive as some of the best comedies on TV but it works more often than it doesn’t. And I hope enough people agree that we can return to Camp Firewood for “Twenty Years Later” in the future. The spirit of Camp Firewood is alive and well. Who would have guessed?