Despite basically being built like “a tank,” a newly discovered armoured dinosaur was equipped with skin that camouflaged it from potential predators.

That’s one of the findings from new research published in Current Biology, which details the 110-million-year-old Borealopelta markmitchelli.

Named in honour of one researcher who spent more than 7,000 hours carefully exposing the preserved animal from surrounding rock just north of Fort McMurray, Alta., the Borealopelta was a large dinosaur weighing more than 2,800 pounds and measuring about 18 feet long.

Belonging to the nodosaur family, the fossil was found in 2011 by a Suncor worker digging on an oilsands project and made its public debut last May.

Researchers had expected the fossil to be a marine animal, as it was located in an ancient marine bed.

Instead, they were surprised to discover it was a dinosaur, likely washed out to the prehistoric inland sea that stretched from the Arctic Ocean to the Gulf of Mexico.

‘It’s a good testament as to how nasty some of the predators were back in the Cretaceous.’ – Caleb Brown, of Alberta’s Royal Tyrrell Museum

Just how the Borealopelta ended up in the sea is unknown. But it likely was covered shortly after its death, leading to spectacular preservation.

When found, the fossil not only had bone but scaly skin, and was three-dimensional, giving the scientists an accurate picture of just how this dinosaur looked.

Mighty but not invincible

This tough dinosaur would have lived alongside other fierce dinosaurs, including the Acrocanthosaurus, resembling a smaller Tyrannosaurus rex. Still, it was bigger than the nodosaur and likely a predator.

This may be why researchers discovered the Borealopelta had something called countershading, a form of camouflage.

The head and neck of the Borealopelta markmitchelli, a member of the nodosaur family. The fossil was found near Fort McMurray, Alta., in 2011 and painstakingly pieced together over the past six years. (Courtesy Royal Tyrrell Museum of Palaeontology)

Today, we see countershading in the form of shadow concealment in animals like deer, penguins or sharks: they all have darker backs and lighter underbellies. This colouration helps break up the three-dimensional form of the animal, hiding the outline of the body from predators.

The Borealopelta was a dark reddish-brown on the top, but got lighter and lighter closer to its front side, near the belly.

Most large predators today don’t have countershading, since they’re at the top of their food chain, explained Caleb Brown, a scientist at Alberta’s Royal Tyrrell Museum.

This suggests the Borealopelta, despite its size and armour, had its own share of predators. 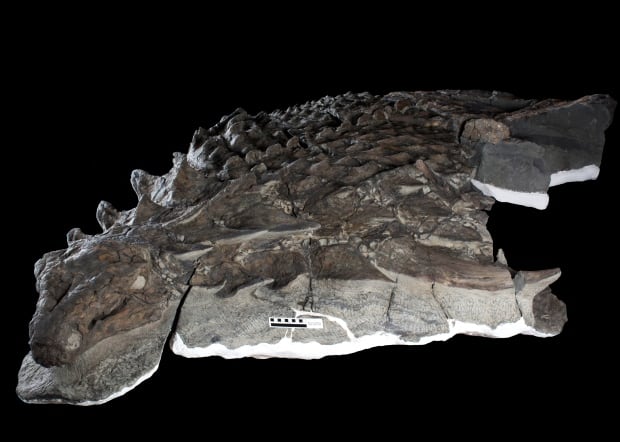 The triangular head of the Borealopelta markmitchelli is seen bottom left; within it, the nostril (lower and left-most circular light grey patch) and the eye socket (upper right). Its skin is dark grey, while its bone is orange-brown, and the rock light grey. (Courtesy Royal Tyrrell Museum of Palaeontology)

“One idea that’s been thrown around is that these things were kind of attack-proof,” Brown said. “No; they were probably part of the food chain, like anything else, and I think our specimen adds a little bit of data to that argument.

“It’s a good testament as to how nasty some of the predators were back in the Cretaceous [period].”

Brown said he’s thrilled to have such an incredibly well-preserved specimen to help provide people with an accurate picture of just how a dinosaur looked, including its colour: nothing has to be left to the imagination.

And with newer technologies and more people working in the field, as time moves on, he said we will continue to get better at seeing what dinosaurs really looked like. “It’s a very good time to be a dinosaur paleontologist.”

The Borealopelta markmitchelli is currently on display at the Royal Tyrrell Museum in Drumheller, Alta., as part of its Grounds for Discovery exhibit.