Co-stars become couples all the time.

But in the case of Anna Faris and Chris Pratt, who announced their legal separation Sunday, their coupling seemed preordained. “Anna and I are meant to be together. Our relationship has made me believe in divine intervention and destiny, just as much as my crazy career and the way I fell into this life,” Chris said in a 2015 Reddit AMA. “She and I grew up 20 minutes away from each other but never met until we met in L.A. We both got our start in horror spoofs. We both did an animated movie for Phil Lord and Chris Miller. We both made our careers playing guileless nitwits for laughs. We both have parents that have suffered with MS. The similarities go on and on. Anna is a great wife. Very patient and understanding. Very supportive. So kind and genuine always. And she gave me a wonderful son and family of in-laws that I truly love.”

So, how did the Washington State natives find each other in Hollywood?

The former couple met in 2007 on the set of Take Me Home Tonight. Though the bawdy comedy was a box office bomb—it debuted in theaters four years later, earning just $7.4 million—the actors felt an instant kinship on set. “It was like magnets. Our personalities meshed. She was a goofball. She liked to have fun. It was impossible to offend her. I just remember thinking, ‘Wow, in another life, that’s who I want to be with—we would be so good together, I just know it,'” he told ELLE in 2015. But at the time, Anna was already married to Ben Indra. “In retrospect, they both had one foot out the door for a long time. We were friends first, but she left her husband at the end of the movie, and we started dating when we were back in L.A. So, we were friends, and I was there for her. And we had just played love interests, so we had this tight bond spending so much time and spending nights in Phoenix, but we never crossed the line. But we were, I think, developing feelings for each other at the time, you know? The day that she told me she was leaving her husband, I knew that I was going to marry her.”

After they began dating, Chris gave her a tour of his apartment. She burst into tears when she saw he had an African stick bug framed on his wall—because she, too, was a collector of dead bugs. “I was like, ‘I’ve met the man of my dreams,” she recalled on CBS’ The Late Late Show in the spring of 2015. “We both have dead bug collections. ‘Make out’ was a gentle way to put it.” 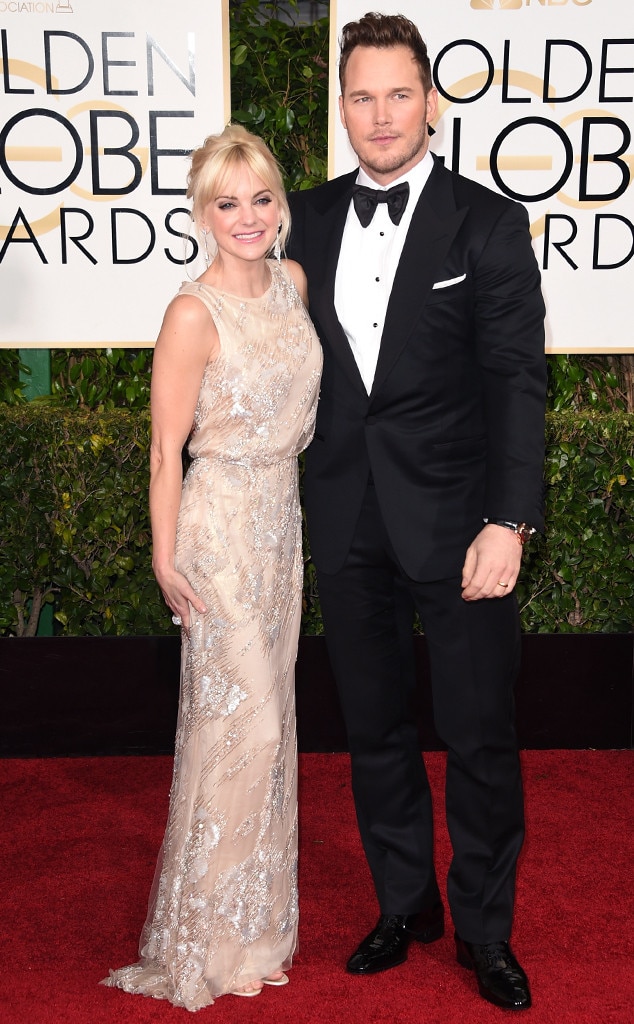 Needless to say, it didn’t take long for Chris to pop the question, and the Bride Wars actor proposed to the What’s Your Number? actress in late 2008. “I knew I wanted to marry her pretty soon [after I met her],” he told People. “It took a while for me to admit it, because it would be crazy to be like, ‘I want to marry you‘ the first day I met her. But I could have!” Chris also wore an engagement ring, just for fun. “She got one,” he said, “and I was like, ‘I want one!'”

“If you’re like Anna and myself, we’re very similar,” Chris joked with Women’s Health in 2015. “We married ourselves because we have comparable egos and abnormally high self-esteem.”

The actors tied the knot in Bali on July 9, 2009. As Chris continued to act in NBC’s Parks and Recreation, he found success on the big screen with Jurassic World, The Lego Movie and Zero Dark Thirty. Suddenly he went from being the guy who held Anna’s purse on red carpets to the guy reporters fought to interview. Anna, meanwhile, starred with Sacha Baron Cohen in The Dictator before she landed a leading role in the hit CBS sitcom Mom (opposite Allison Janney).

With both of their careers on the rise, their love for each other only grew stronger—and Anna welcomed a son, prematurely, in August 2012. Chris later told People that they “prayed a lot” before they were able to take Jack Pratt home from the NCIU. “It restored my faith in God, not that it needed to be restored, but it really redefined it,” the Guardians of the Galaxy star said. “The baby was so beautiful to us, and I look back at the photos of him and it must have been jarring for other people to come in and see him, but to us he was so beautiful and perfect.”

Seeing Chris as a father only made Anna love him more. “He’s strict, but he’s also incredibly fun, incredibly loving,” she told The Huffington Post in 2016. “It’s so amazing to see that moment that Chris comes home from work and Jack is like, ‘Daddy!’ He is sexy, but more importantly he’s a great person. When I was falling in love with him, I loved how kind he was to people. I loved how smart he is, but he’s not pretentious at all. He doesn’t wear that as a badge—he kind of lets people slowly discover it.” Most importantly, Anna continued, “He’s humble, and he’s a great leader, and he’s an incredible father and a great husband. And I feel like, after years of dating people that weren’t the best for me, I found somebody who’s love I could really accept.”

The feeling, of course, was mutual. 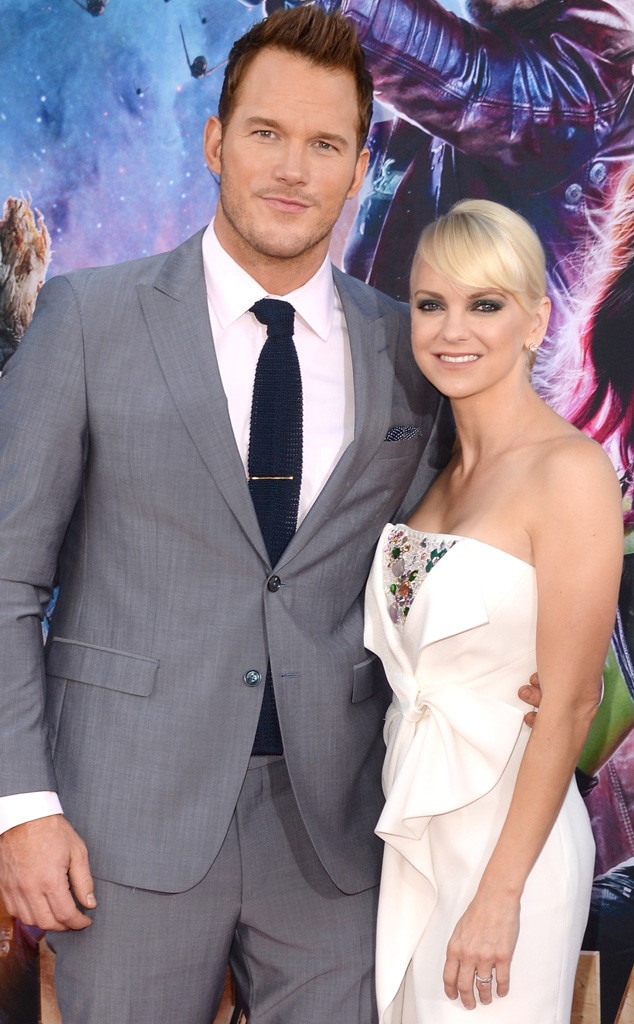 Chris was only sort of kidding, as he told Entertainment Weekly in 2015 that they planned to move back to their home state once Mom was over. “I don’t wanna raise Jack here,” the L.A.-based actor said. “Anna and I are both from Washington State. We both had pretty simple lives and upbringings. I want Jack to just be able to be like, ‘See ya buddy. Go outside. Come back later.’ And also, I like the country and clean air and things just slowed down.” Thinking about Jack’s future, he said, “I’d like to give him some normalcy. It’s gonna be weird for him to have famous parents. It’s gonna be a burden for him sometimes, you know? But it’s all relative.”

Anna was on board with Chris’ plan.

Though their schedules often kept them apart, they worked hard to keep their marriage alive. Last year, for example, he upgraded her wedding ring. “I look and I’m like, ‘I can’t believe it either!'” she told E! News’ Zuri Hall. “He’s an incredibly romantic man and I’m very, very lucky.”

“She got me a tractor,” Chris explained, “so we’re kind of even!”

Though they often gushed about each other in interviews and social media, Anna and Chris struggled with how much of their romance they should share with fans. “We grapple with the idea of being a public couple. For the first time, maybe a year ago or 10 months ago, we were in the public a little bit,” Anna said on her Unqualified podcast last year. “There were some tabloid rumors about strain on our relationship. I just remember feeling so hurt in a way that bothered me because I didn’t want to think of myself as somebody that could be affected by tabloid s–t. There was a picture of me walking alone on the beach: ‘Aging Anna Faris, Alone on the Beach.'”

“I take pride in how great my relationship is with Chris. Having said that, of course, in this crazy world where he’s off doing movies and I’m in L.A. raising our child, of course I’m going to feel vulnerable, like any normal human would. It did make me feel like, ‘Is public perception, even though it’s false, is there a grain of something?'” she said. “It made me feel incredibly insecure.”

In 2015, Anna admitted it was difficult to have her marriage picked apart in the media. “I had always kind of believed that part of the rumors of celebrity couples were sort of true because they had never been part of my life,” she told Us Weekly. “I was like, ‘Oh, maybe there’s a kernel of truth to that.’ It’s been a little devastating, because for us, it’s like, ‘What the heck?’ This has been blindsiding to us. We have an incredible relationship. It’s been weirdly stinging.”

While Anna and Chris haven’t revealed why they decided to separate after eight years of marriage, they remain united on one thing: “We tried hard for a long time, and we’re really disappointed,” the amicable exes said in a joint statement Sunday. “Our son has two parents who love him very much and for his sake we want to keep this situation as private as possible moving forward. We still have love for each other [and] will always cherish our time together.”