Britain’s Royal Photographic Society has announced the short list for its International Images for Science competition, which features images made using equipment from smartphones to multimillion-dollar microscopes. Student, amateur, professional and medical photographers were asked to submit visually appealing photos that told compelling stories about science.

A Nightmare of the Small World, Pratik Pradhan

Pratik Pradham’s image of a colony of giant forest scorpions at midnight was one of 100 shortlisted images selected from more than 3,500 entries from around the world. The black scorpions Pradham photographed can grow to be up to 23 centimetres long and glow blue when illuminated using an ultraviolet torch.

It’s the sort of image the competition’s panel of five judges were intent on highlighting, said Michael Pritchard, the executive director of the Royal Photographic Society, that

“What we’re aiming to do is really showcase some of the best images of science that tell a story, that show the range of all the areas of science and photography work can be involved in,” he said.

Pritchard said entries to the competition ranged from photographs featuring microscopic and atomic detail to astronomical images of galaxies hundreds of light-years away.

Haken Kvarnstrom took this micrograph, an extreme close-up photo taken using a microscope, of a female water flea, which typically grows to be about three millimetres in length. The small round objects inside are eggs. 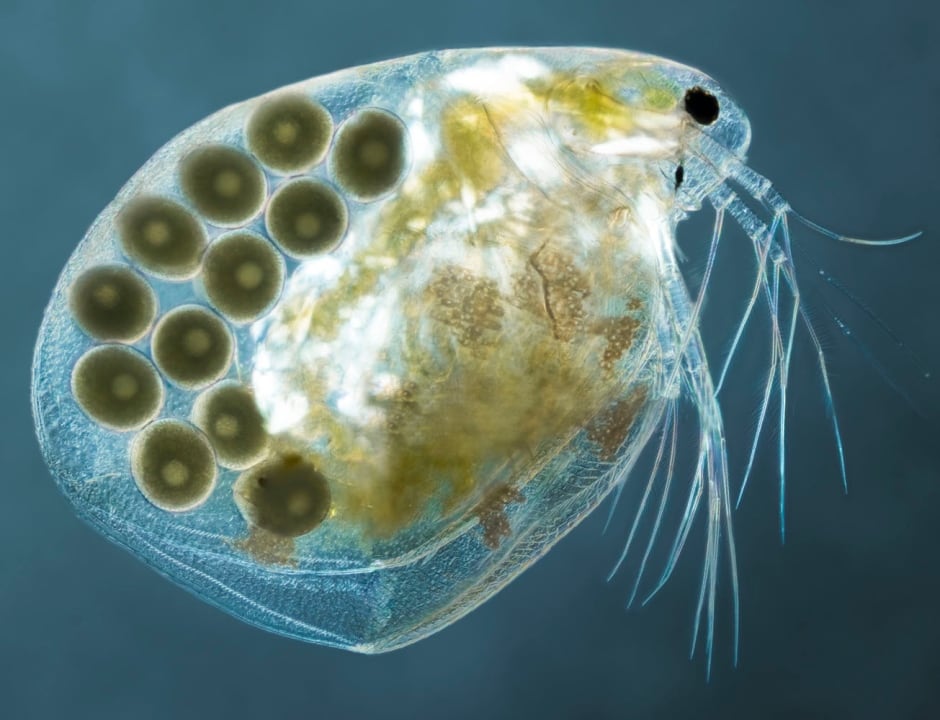 Matous Pikous photographed this close-up of water drops on the surface of a tablet computer, where several coloured lines have been drawn to create a range of refraction effects.

Pritchard said the contest judges, who came from backgrounds in photography, medicine and engineering, were looking for images like Pikous’s that are not only technically sound, but also leave the viewer with better a sense of the scientific feature or principle depicted. 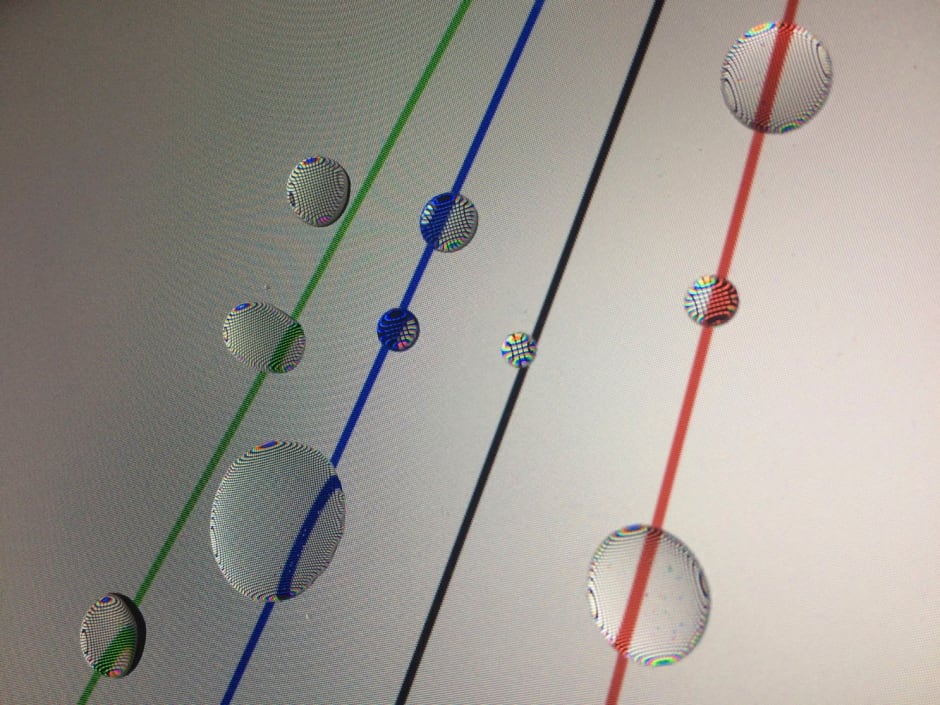 Richard Germain snapped this photo of a safety pin sitting on the surface of water. The surface tension caused by the intermolecular forces of the water keeps the pin from sinking, but the surface is bent from the weight of the pin.

Germain’s image and the others shortlisted will be featured in an exhibition at London’s Royal Academy of Engineering starting in September. 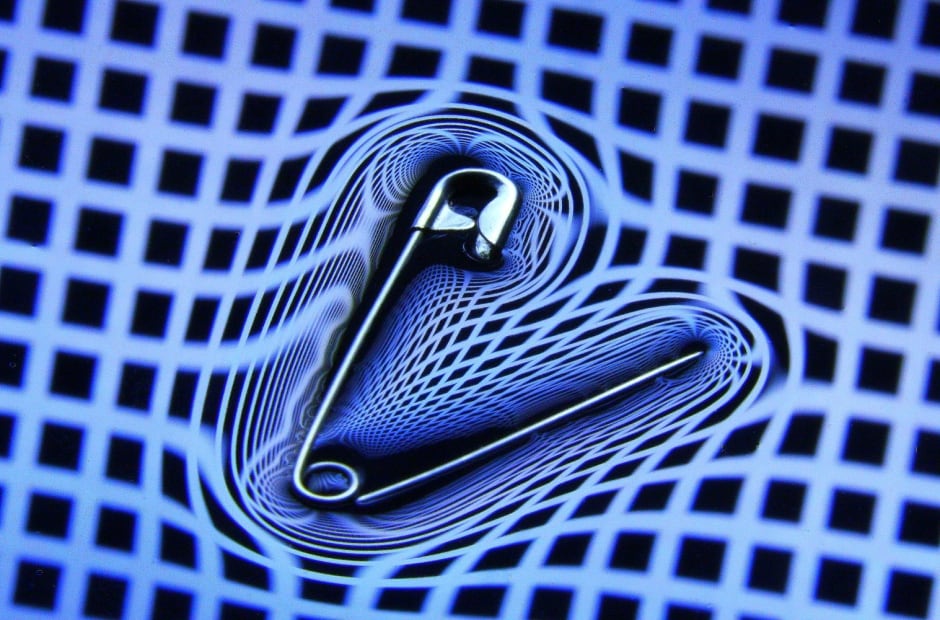 Named after the German chemist Raphael Liesegang, the blue Liesegang rings seen here are formed in many precipitation reactions, where two liquid solutions are combined and a precipitate — or solid — is created.

In the reaction Gabriel Kelemen photographed, a mixture of potassium dichromate, silver nitrate and cerium sulphate were added to a gelatin solution. 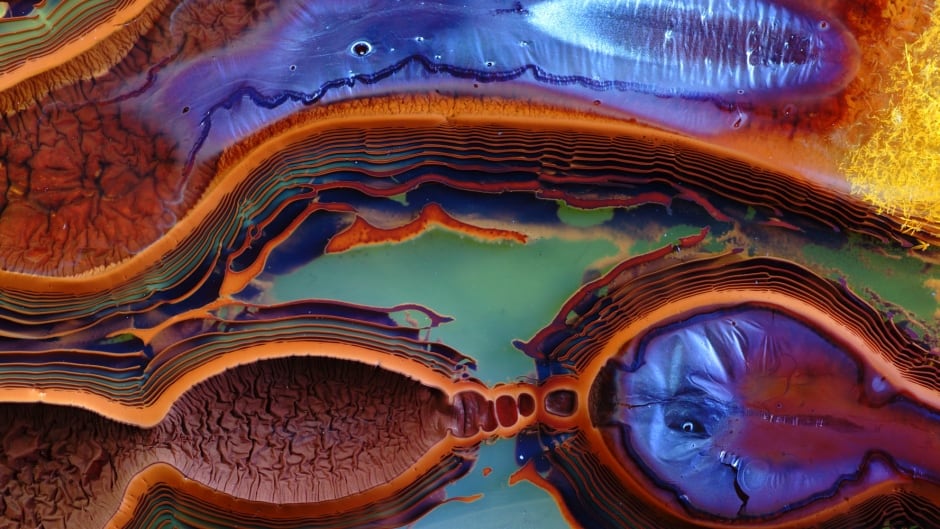 Gerd Guenther took this light micrograph of the empty shells of an amoeba. The Difflugia amoeba builds its shells with particles found in its habitat. The genus in this photo, which covers a field approximately 0.9 millimetres across, uses sand grains.

Images like these are at the heart of the competition, says Pritchard.

“That’s where I really appreciate the role that photography can play to illustrate and really illuminate something that is completely invisible to us in our normal daily lives.” 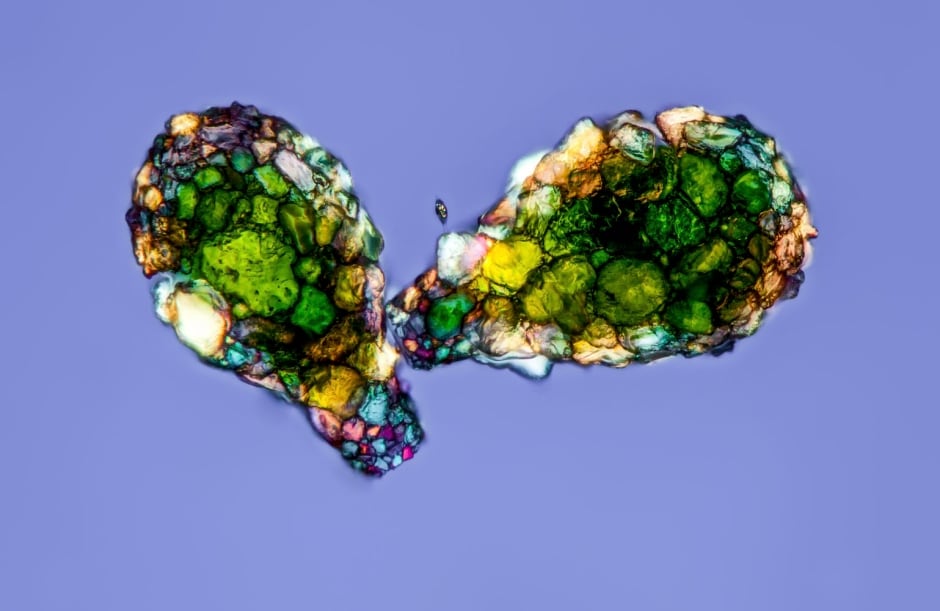 Stephen Gschmeissner, a scanning electron microscopist from the U.K., captured this digitally coloured micrograph of a mosquito leg, also called a tarsus. It includes a claw, pulvillar pad with adhesive hairs called tenent setae, and scales. Scales cover most of a mosquito’s body, but are especially dense on the insect’s legs, where they are thought to provide protection and water-supporting force. 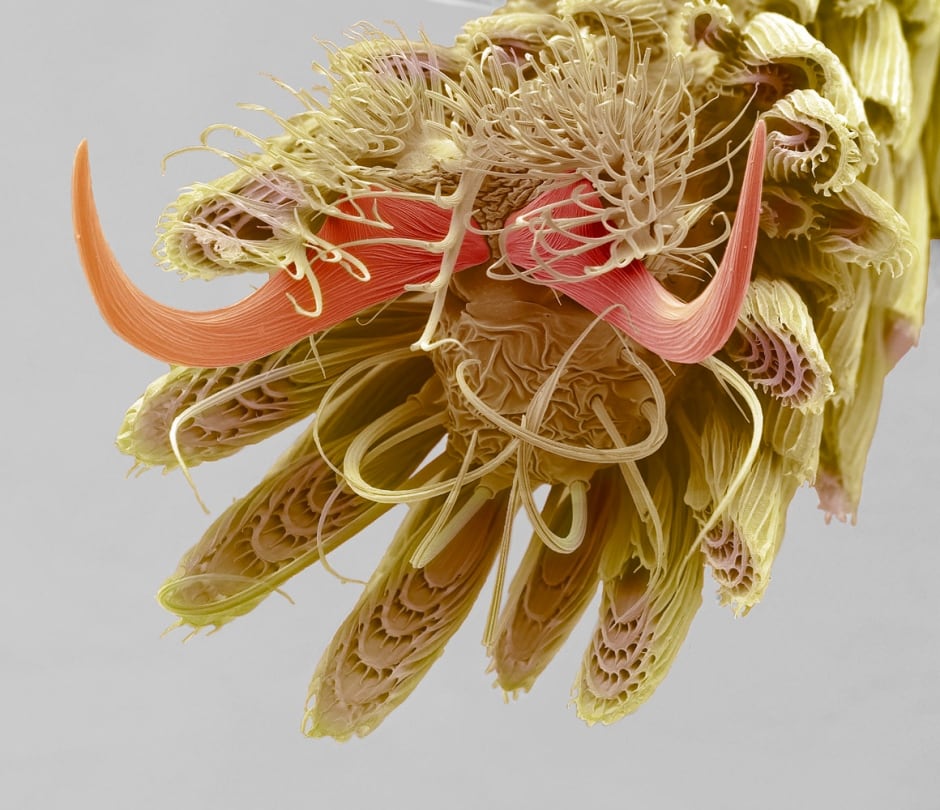 Andrey Narchuk made the contest shortlist for this image of a pair of small, swimming sea slugs, organisms that can be found in the cold, northern waters of the Pacific and Atlantic oceans. Sea angels are mollusks that discard their shells during embryonic growth, and can reach a length of eight centimetres during their two-year lifespan. 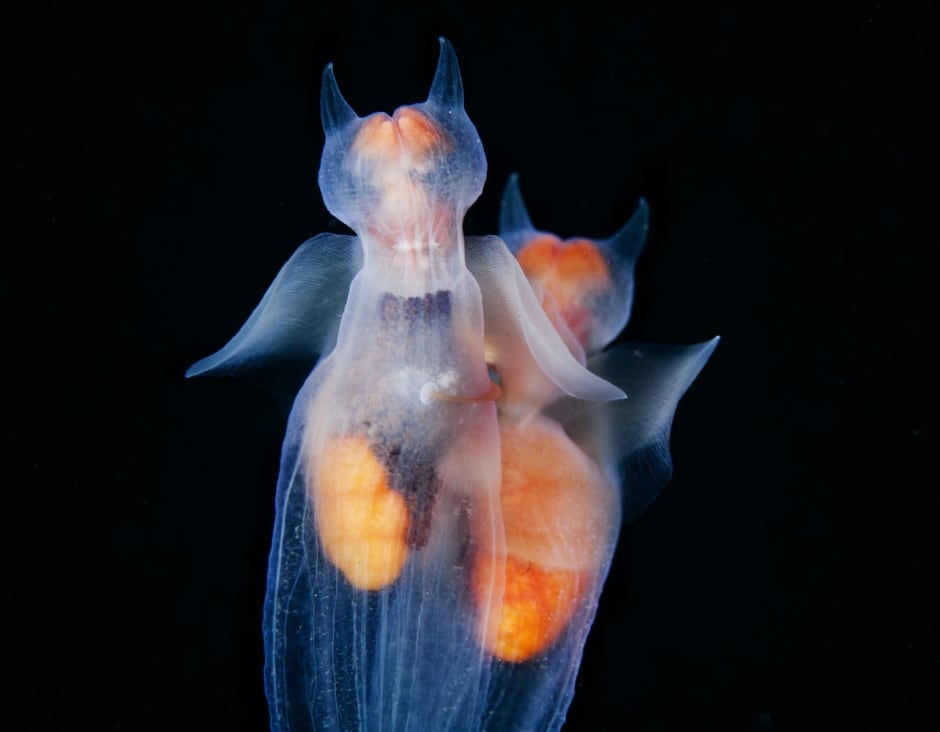 Several spectacular landscape photographs also made the cut. Here the northern lights are seen above Jokulsarlon, a large glacial lake on the southern edge of the vast Vatnajokull Glacier in Iceland. 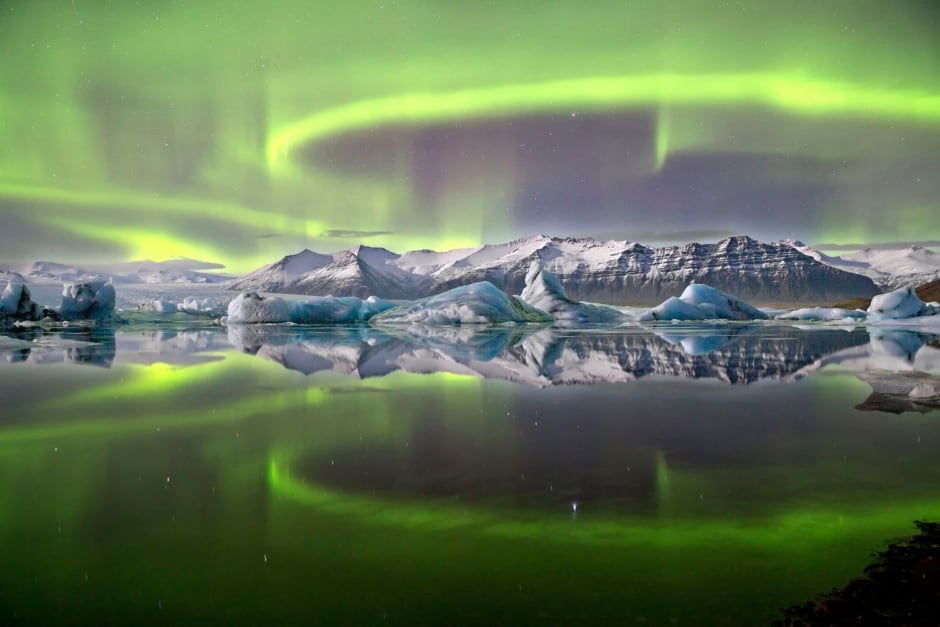 Every year the Royal Photographic Society receives a huge and diverse range of entries from photographers around the world, says Pritchard, and the judging process is long and difficult.

This image by Susan Elaine Jones is a composite of photographs taken of 32 human skulls from the ossuary, or bone crypt, of Holy Trinity Church in Rothwell, Northamptonshire, U.K. Using radiocarbon dating, a team at the University of Sheffield found that the skulls date from between 1250-1450 CE. 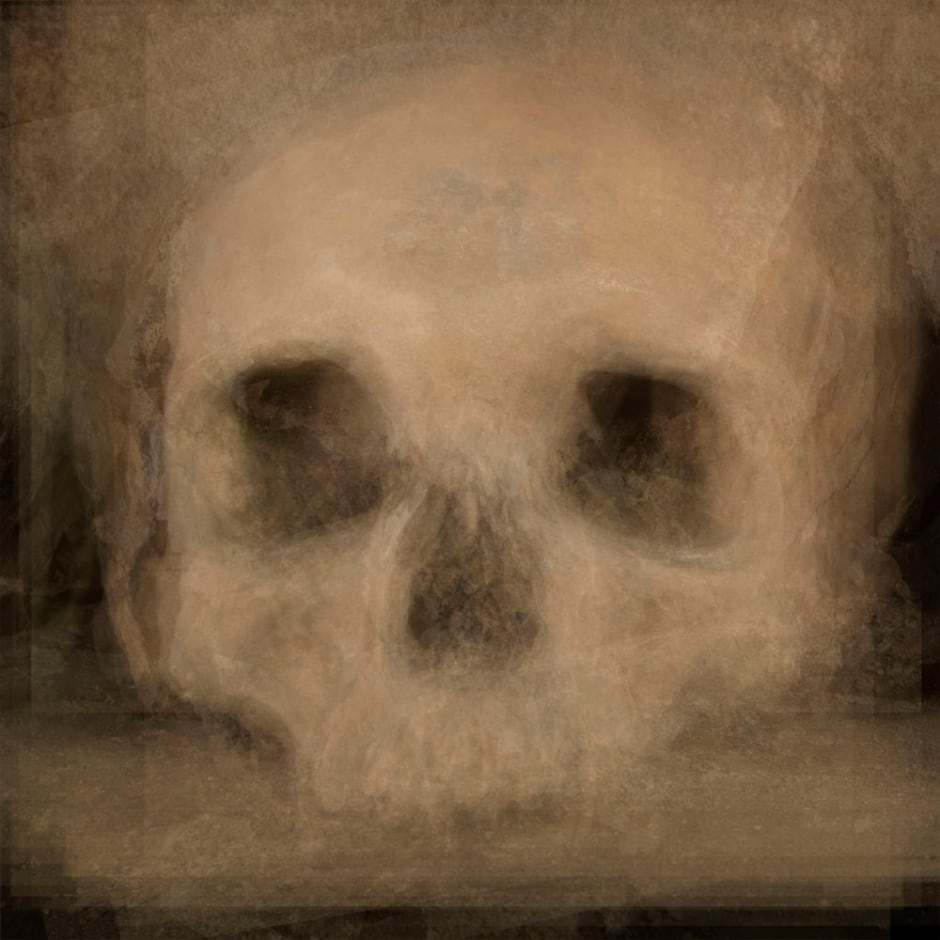 Space photography also features prominently in the collection. The darker area at the center of this image, taken by English photographer Dave Watson, is the Horsehead Nebula, named for its distinctive shape. The Flame Nebula is the brighter patch at the lower left. Both are in the constellation Orion. 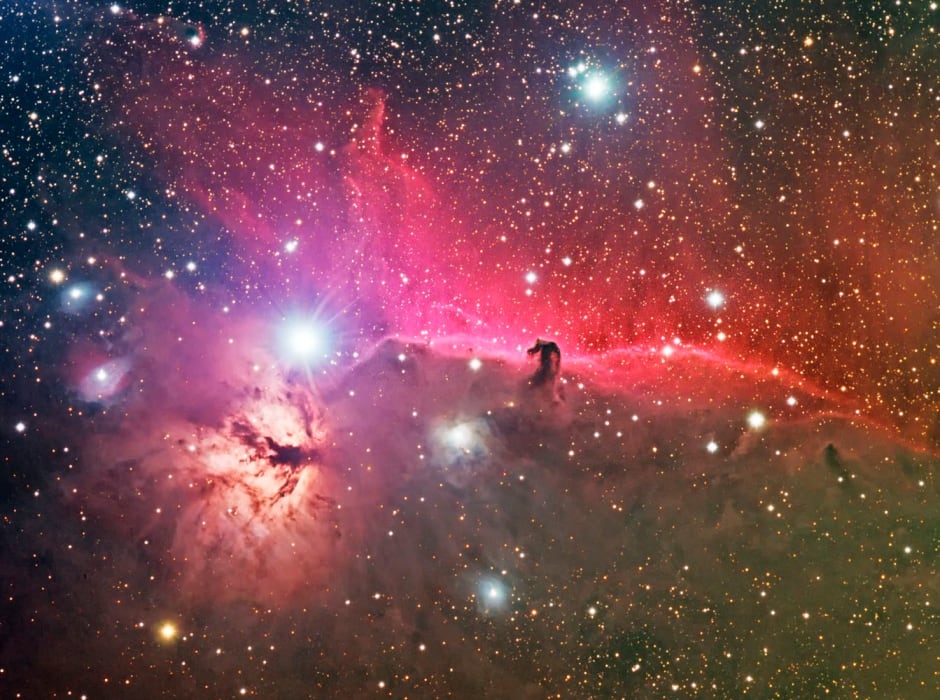 Gerd Guenther captured this light micrograph of a lengthwise section of a 45 bass guitar string. Here you can see the central core around which another wire has been wound. The image covers a field just 2.5 millimetres across. 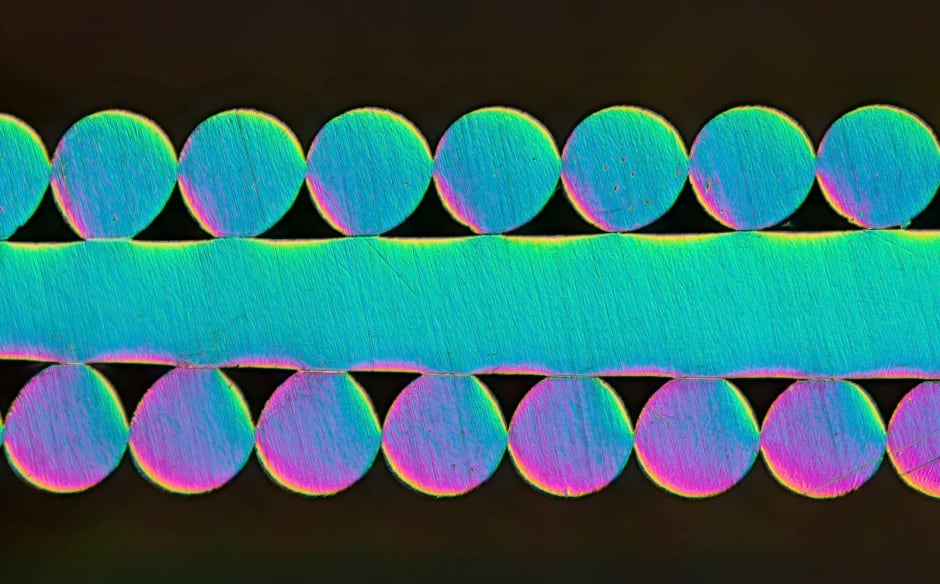 Multiple exposures on a single sheet of film show three stages in the fruiting of the fly agaric, a mushroom also know as Amanita muscaria. The photo, taken by Phred Petersen, illustrates changes to the overall height, size and shape of the cap as the fungus develops over a 24- to 36-hour period. 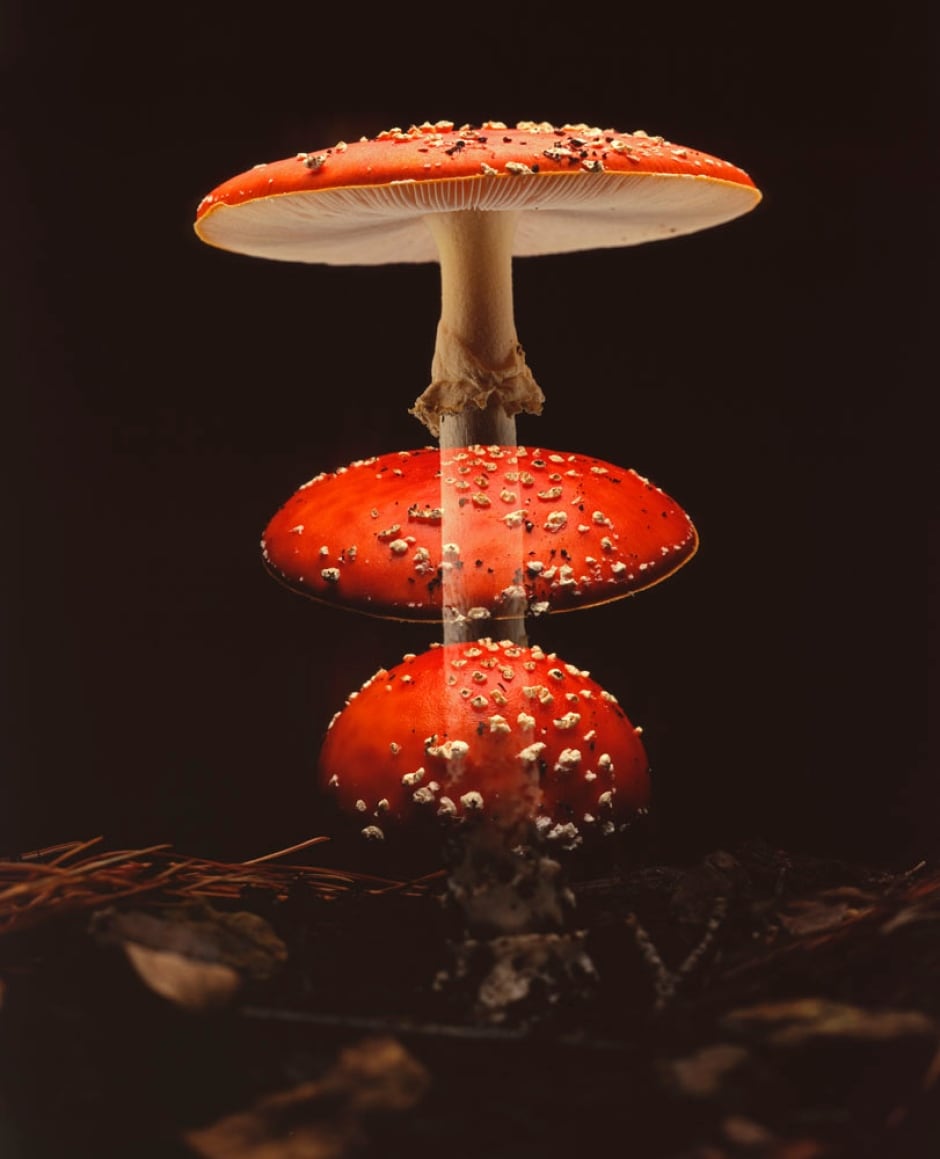 This photo by Alexandre Lagreou was also chosen as one of the winners of the 2017 Greenpeace Photo Competition. Here, a gathering of great monarch butterflies is seen during their migration. Monarch butterflies are famous for their annual journeys in North America, flying from as far north as Canada to areas of Florida and Mexico to spend the winter in roost colonies. 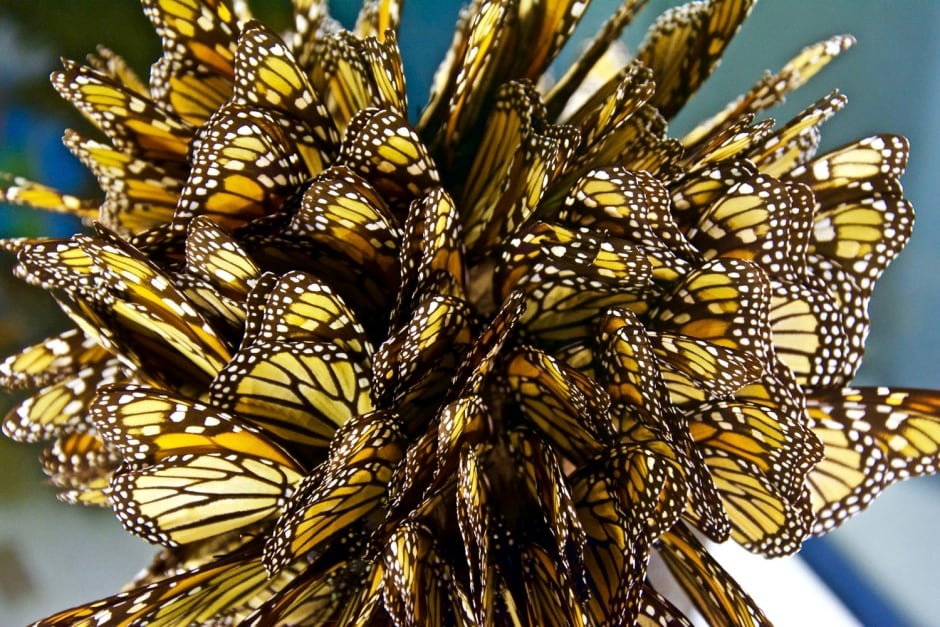 In another stunning illustration of a scientific principle shown through photography, Jungwook Kim’s photo captures the Kaye effect, first described by British engineer Alan Kaye in 1963. The Kaye effect is a property of sheer-thinning liquids, which lose viscosity when a sheer force is applied.

At first, the stream of liquid forms a pile where it hits a surface. But soon a sheer-thinned layer develops in a dimple in the pile. The liquid stream hitting the dimple slides over it and shoots off. 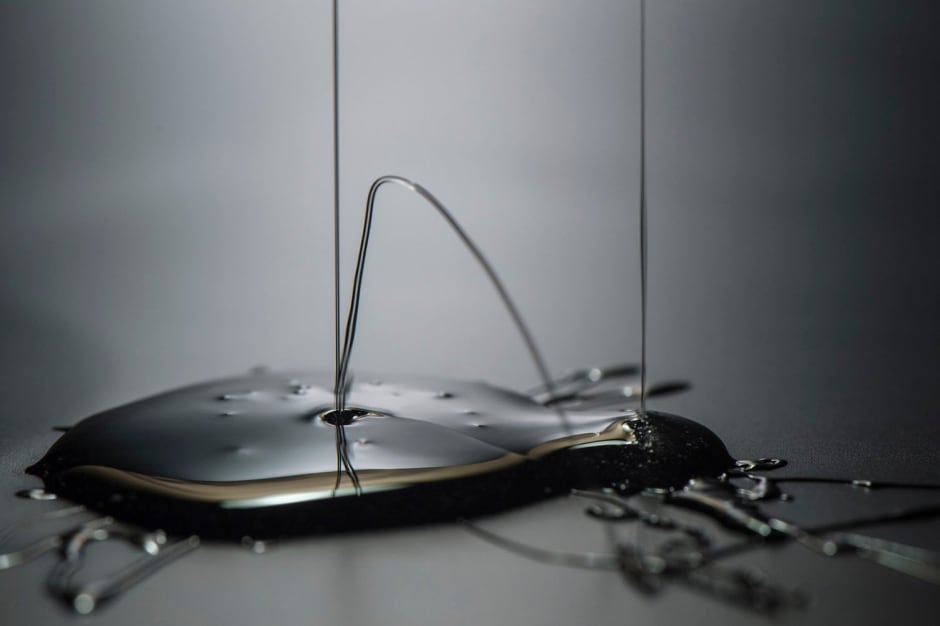 This coloured micrograph shows a dying euglenoid alga and the release of its green chloroplasts. The specimen came from a polluted lake in Vietnam. 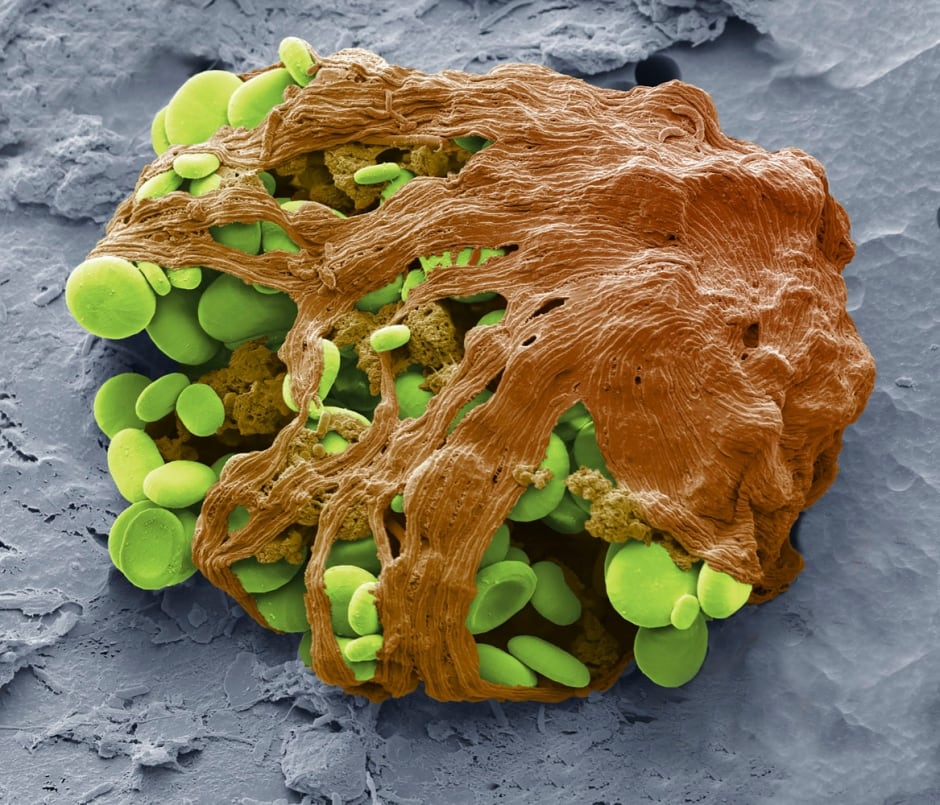 Daniela Rapava captured this photo of the wall of a frozen soap bubble. The bubble is composed of three layers: a layer of water sandwiched between two layers of soap. As the water layer freezes it produces these large dendritic crystals. 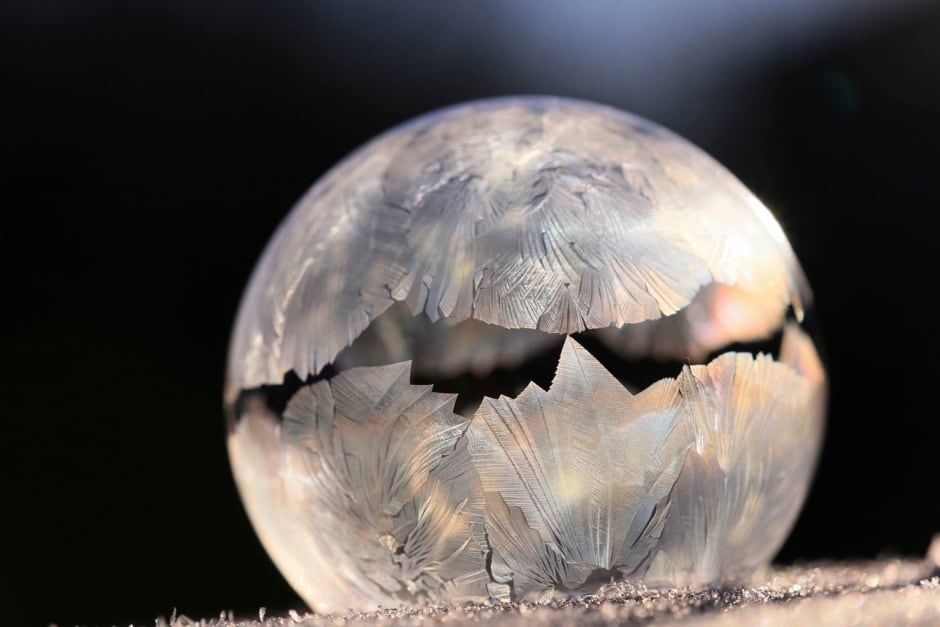