Why has this summer been so deadly for North Atlantic right whales in the Gulf of St. Lawrence?

“It’s a question that a lot of researchers, including myself, are pondering at the moment,” said Kim Davies, a post-doctoral fellow at Dalhousie University. She looks at how underwater remotely operated vehicle (ROV) technology could be used to alert ships if whales are in their path.

Ten dead North Atlantic whales have washed up on the shores along the Gulf of St. Lawrence this summer. Four of those carcasses have wound up on the western coast of Newfoundland.

An announcement is expected Thursday from Fisheries Minister Dominic LeBlanc that will address what measures are being taken to prevent further deaths of the endangered species.

Running into ships and fishing gear

Davies said that of those 10 whales, there have been at least six necropsies done on the carcasses so far.

Davies said it’s logical to assume that trauma came from collisions with ships, and that evidence of internal bleeding shows they were hit while they were alive.

DFO personnel take samples from a dead right whale that washed up on the shore in Cape Ray, on the west coast of Newfoundland. (Fisheries and Oceans Canada)

Another preliminary report shows one whale may have died because it was tangled up in fishing gear too many times.

Researchers are waiting for preliminary reports from at least two more necropsies, but the rest of the whales may be too decomposed for testing to be done.

Look at living whales to explain the dead

Davies said necropsies and carcasses can give only a limited look at what might really be happening with these whales. And even if ship collisions and fishing gear do explain why a few of the whales died, it doesn’t answer a bigger question.

“These whales encounter ships and they encounter fishing gear over many years and yes they do die, but never so many over such a short time period,” she said. “And there are no more vessels and no more fishing gear in the Gulf of St. Lawrence than elsewhere. So why now?” 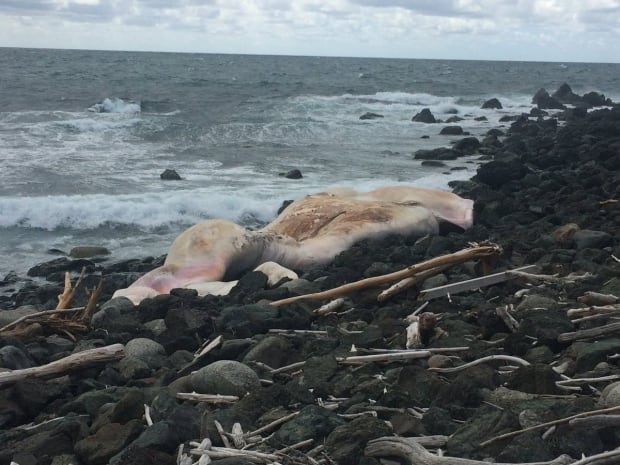 This dead North Atlantic right whale washed ashore on a beach in Cedar Cove, near Lark Harbour in western Newfoundland recently. DFO is investigating to determine if it is a new death or one that was recorded earlier this summer in the Gulf of St. Lawrence. (Colleen Connors/CBC)

Davies said researchers don’t have a good answer for that at the moment, and the dead whales are not going to be able to provide those answers, which is why they’re looking at living whales.

Davies said researchers have been worried about the right whales in the area for years — long before these carcasses started washing up on the shores. They’ve been concerned there weren’t as many calves and that perhaps the whales were in the Gulf of St. Lawrence because their food supplies in other areas weren’t enough to sustain them.

“So we can’t rule out that there’s some health factor that’s contributing to these animals perhaps being more susceptible to dying if they are hit by ships,” she said.

Fisheries and Oceans Canada is taking short-term measures to protect the whales in the area. They’ve closed the snow crab fishery in some parts of the gulf and they’ve been asking boats to go slower so whales have a chance of surviving an impact. 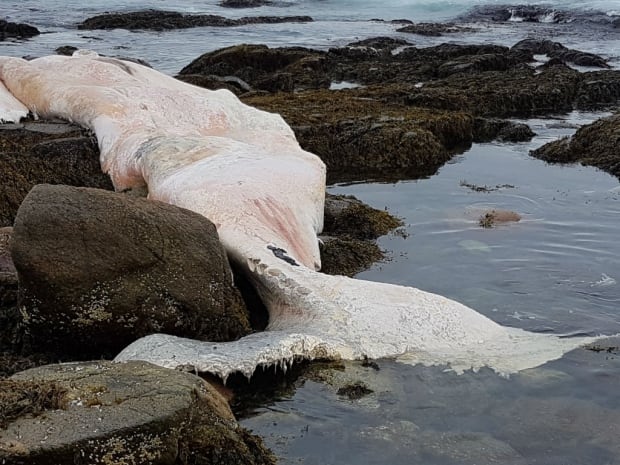 This North Atlantic right whale carcass was found in Cape Ray, on the west coast of Newfoundland. (Fisheries and Oceans Canada)

In the longer term, Davies said they’ll have to look to strategies that have worked elsewhere — like an early warning system in Boston shipping lanes asking people to slow down if there are whales about — and adapt them to the particular group of whales in the gulf.

Davies pegs the world’s North Atlantic right whale population at “somewhere between 475 and 525.”

The World Wildlife Fund (WWF) is pushing for the creation of more marine protected areas (MPA) for animals like the North American right whale (pictured) so they can live without risk of coming into contact with ships or other human activities. (worldwildlife.org)

Emily Giles is the senior specialist on species conservation with the World Wildlife Fund, and told CBC that WWF is pleased with the steps DFO has been taking to figure out what’s killing the whales.

She said a more long-term conservation plan is needed though, such as creating more marine protected areas where the whales can live without risk of coming into contact with human activities

However, she acknowledges that North Atlantic right whales typically aren’t found in the Gulf of St. Lawrence, so they may be chasing food in there this summer which is putting them in the path of moving ships.

“They are what we considered an endangered species, so they’re really one step away from becoming extinct,” she said, “So the loss of even one or two can have a huge impact to the population.”