No one who’s paid any attention to what’s been happening in the U.S. for the last two years could dare ask after Charlottesville, “How did it come to this?”

Nor can those who truly understand the dark chapters of American history deny the darkness of this moment.

Consider this particular reaction after the president spoke on Tuesday: The anti-Semitic, Holocaust-denying convicted felon and former Imperial Grand Wizard of the Ku Klux Klan, David Duke, enthusiastically tweeted his thanks to President Donald Trump, because he liked what Trump said about the race-related violence and killing in Charlottesville, Va.

And why wouldn’t the former Klan leader say that?

Presumably the president was aware of all that when he spoke — he says he had “great knowledge” of what went down — but he seemed not to feel any offence personally, even though his own daughter Ivanka and son-in-law Jared Kushner are Jewish.

Riot police protect members of the Ku Klux Klan from counter-protesters as they arrive to rally in opposition to city proposals to remove or make changes to Confederate monuments in Charlottesville. (Jonathan Ernst/Reuters)

One of the white supremacists, Chris Cantwell, certainly meant for Trump to take it personally. He told Vice News he’d prefer a president “who does not give his daughter to a Jew. I don’t think you could feel about race the way I do and watch the Kushner bastard walk around with that beautiful girl, OK?”

Trump said he condemned racism and Nazis, but he also repeatedly pointed out that the white supremacists “had a permit” for their demonstration whereas the anti-fascists, shame on them, did not.

Fascists, anti-fascists — it all seemed so six of one, half a dozen of the other to the president. He even went so far as to equate monuments to Confederate generals with monuments to the Founding Fathers of the nation. He asked whether the “alt-left,” as he called the anti-fascists, would soon clamour for the destruction of the Washington Monument and the Jefferson Memorial, because, after all, those presidents were slaveholders too.

Never mind that both Washington and Jefferson, imperfect as they were, accomplished great things, while Robert E. Lee and Stonewall Jackson are remembered mostly for having led soldiers in the war to preserve the wicked institution of slavery. Trump did not miss the opportunity to completely miss that point.

But make no mistake, what led the U.S. to this presidency in 2017 has happened in plain sight and on the largest political stage in the world. Whether Trump is a racist is something that only those who know him well can judge. He seems to have no deep convictions about anything, so why that?

But watching him as a politician, through his birtherism, his smearing of Mexicans and Muslims, his constant provocation of white racial anxiety, there is no doubt he is a racial opportunist. 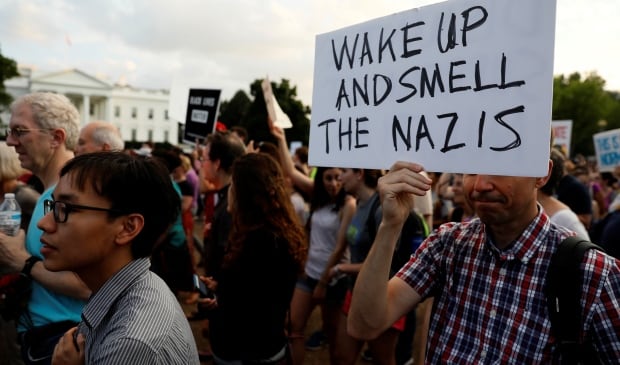 People gather for a vigil in response to the killing of counter-demonstrator Heather Heyer in Charlottesville. (Jonathan Ernst/Reuters)

Those who supported him in the primaries and in the election knew that. They had a clear picture of the man they were choosing. They might have been put off by him in the beginning, but they decided to put up with him in the end.

House Speaker Paul Ryan was the prototype. In the summer of 2016 he characterized Trump’s comments about a Mexican judge as “textbook racism” and then got in line behind him. Others took their cue from him.

White nationalists, in particular, saw who Trump was and saw it early. Duke endorsed him in early 2016 and said that white people who didn’t support Trump were betraying their European heritage.

Others picked up on Trump’s language even earlier and recognized how it could promote their ideas. A couple of years ago I interviewed Matt Heimbach, leader of the white nationalist Traditionalist Workers Party, because I’d learned he was a Trump supporter and I wanted to know why.

It was in the fall of 2015 when he told me that Trump gave political cover to his own racist views about immigration and made them seem less radical to “normal folk” in mainstream America.

Trump was “moving the discussion to the right, toward nationalism,” Heimbach said. “He’s making the very question of ‘what is an American’ a question.”

At a March 2016 rally in Louisville, Ky., Trump egged on supporters who were shoving and pushing black protesters around. “Get ’em out of here!” he ordered. Heimbach was there doing the shoving for him.

Trump’s words were an incitement to violence Heimbach now claims, in his response to a lawsuit against him and the president to be heard in a U.S. court. 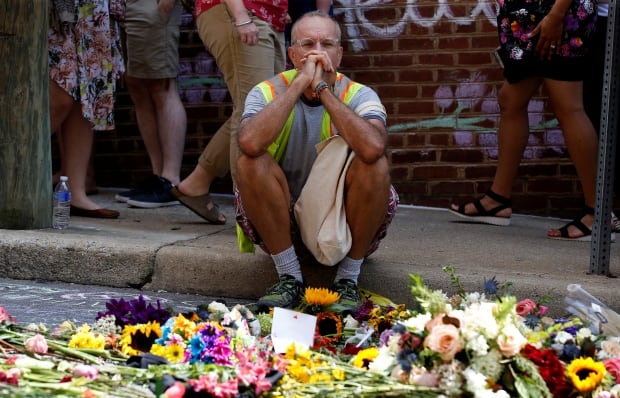 A man looks at flowers placed on the road where Heather Heyer was killed when a suspected white nationalist crashed his car into anti-racist demonstrators. (Joshua Roberts/Reuters)

And yes, Heimbach was in Charlottesville this weekend. He doesn’t always shove people around, he can be polite and is always articulate. He might even be one of the “very fine people” Trump mentioned.

All of this should be a shockingly dark moment. What it shouldn’t be is the least bit surprising.