Some Albertans are coming to the rescue of ranchers in B.C. who lost much of their land in this summer’s wildfires.

On Thursday, a truckload of Alberta hay bales headed out to the Riske Creek community near Williams Lake.

A second truckload left for B.C. on Saturday and Lauren Dorion, horse manager at the Black Diamond Land & Cattle Company, said she came up with the idea to donate after seeing ranchers in B.C. struggling to feed their animals.

“Most of them are working day and night regardless of these fires still,” Dorion said. “So to then organize feed for your animals and try to get all that taken care of is just a really hard thing for them to do right now.”

Dorion’s sister Kaitlyn Dorion is a farmer in Riske Creek and says the donations will help families left with nothing to feed their livestock.

A number of Calgary companies lent equipment and personnel to the endeavour, including a donated driver and truck from Calfrac Well Services Ltd., a trailer from Trailer Wizards and 12 custom-built straps from Canyon Rigging.

Kaitlyn Dorion, a farmer in Riske Creek, B.C., says there are thousands of head of livestock threatened after wildfires swept through the area. (Supplied/Lauren Dorion)

“We’re really lucky out here in Alberta, we have a lot of really generous people and ranches and a lot of hay to donate,” Lauren Dorion said.

Kaitlyn Dorion said thousands of cattle and horses in the Riske Creek area are without food but the donations will go to those hit hardest by the fire.

She had her own run-in with the wildfires, which came dangerously close to her home on the day of her wedding, forcing her to cancel her nuptials until a later date.

Lauren said the first shipment was donated to five families and the second shipment will help at least another 10 families.

Barry Williams is the driver making the 24-hour round trip into B.C. and said the area around Williams Lake looks “post-apocalyptic.”

“Everything was grey and dark and black. All the trees and all the grass was completely burnt,” Williams said. “It looked like grey and black sand everywhere all through the hills coming up past Cache Creek all the way up to Williams Lake.”

Williams said there were “lot of hugs” and “a lot of handshakes” when he delivered the first shipment. 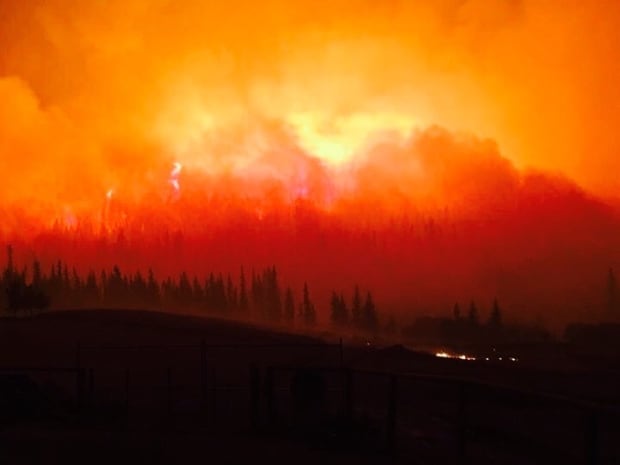 Lauren Dorion said there aren’t any plans for a third shipment but that could change if B.C. ranchers continue to struggle.

Garth Cleveland helped manage the logistics of the donations and said many B.C. ranchers were forced to let their animals loose as the wildfires got closer to homesteads.

Cleveland said farming communities band together when times get tough and he expects the donated feed will help wayward animals if they return to their burned-out pastures.

And he said if the roles were reversed, other farmers would help Alberta out too.

“It may not be you this year, but we’ve had droughts around here where there’s not enough hay and people have donated hay into Alberta,” Cleveland said. “It’s a big family, really.”