A ‘Water is Sacred, No Pipeline’ banner is on display at the Great Water Gathering. The banners were designed by artists Christi Belcourt and Isaac Murdoch. (Lenard Monkman)

Lenard Monkman is one of two recipients of the 2017 CJF-CBC Indigenous Journalism Fellowships, established to encourage Indigenous voices and better understanding of Indigenous issues in Canada’s major media and community outlets. He reports from the Great Water Gathering that took place in Manitoba’s Whiteshell region in July 2017, with support from the fellowship.

Women have been on the frontline of much of the land and water-related Indigenous activism that we see in Canada today. In the fight for clean water, this style of activism has seen art and spirituality go hand in hand.

For many, these actions have nothing to do with activism, but rather, protecting a way of life for future generations.

For four days in July, nearly 100 Indigenous and non-Indigenous people came together to camp and pray for water at the Great Water Gathering in Manitoba’s Whiteshell region. The gathering was organized by Belcourt, and a group of Anishinaabe elders in Manitoba.

“The idea is to come together to pray for the waters, but also to pray for future generations of not just our children, but of all babies that are going to be born in the future,” said Christi Belcourt.

Belcourt is a Métis visual artist from Manito-Sakahigan (Lac Ste. Anne, Alta.), whose artwork has been displayed in art galleries, used by Italian fashion designers Valentino, and displayed on protest banners across North America.

“It’s more important than ever that people come together and pray for the waters and make offerings for the waters,” said Belcourt.

Belcourt has taken on a relentless approach to letting people know about the state of freshwater in Canada, and she worries about what the future holds for her daughters.

“In a place with beautiful pristine waters, like our ancestors had for generations, now we’re in a position where we can’t drink out of streams, where everything is poisoned,” she said.

“As human beings, in some of those cases, we are able to filter out water from water filtration plants, but animals and birds and everything else [doesn’t] have a filtration plant.”

Ceremonies for the water

The second day of the gathering featured an “onaman face painting” ceremony, which was conducted by Belcourt. According to Belcourt, onaman is a red ochre paint which was used by Indigenous peoples for thousands of years.

Belcourt says that traditionally through this ceremony, each person who has their face painted is making a commitment to help and protect the waters.

One by one, everyone lined up, made a tobacco offering and had their faces painted. 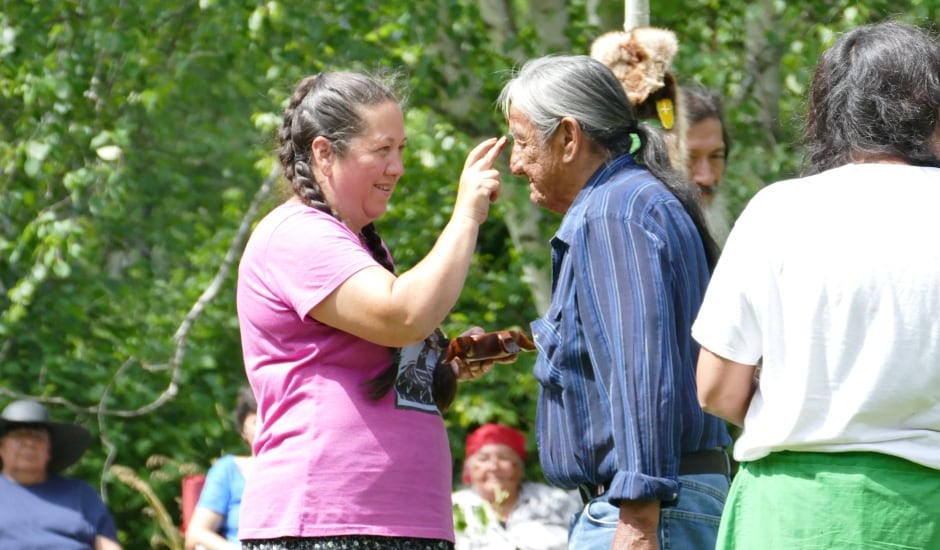 “I think once you go through that ceremony, you feel it. Because you’re a part of this Earth, and a part of the water,” said Shannon Paul after having her face painted in ceremony. Paul, 29,  travelled from Northwest Angle No. 33 First Nation in Ontario to be a part of the gathering.

In recent years, the actions of Idle No More and the Dakota access pipeline fight in Standing Rock, ND, have put environmental and water issues at the forefront of Indigenous activism.

“Mni Wiconi,” which translates to “water is life” in the Lakota language, became the slogan for the people demonstrating at Standing Rock.

The clashes between police and activists in Standing Rock provided powerful images, but they also precipitated a shift in language with people on the front lines of the protests asking not to be called protesters, but rather, “water protectors.”

The protests and actions prompted Belcourt to action, using her artwork.

Belcourt, along with Anishinaabe activist Isaac Murdoch, were approached by the environmental group 350.org to use their art at a mass demonstration in Winnipeg last summer. 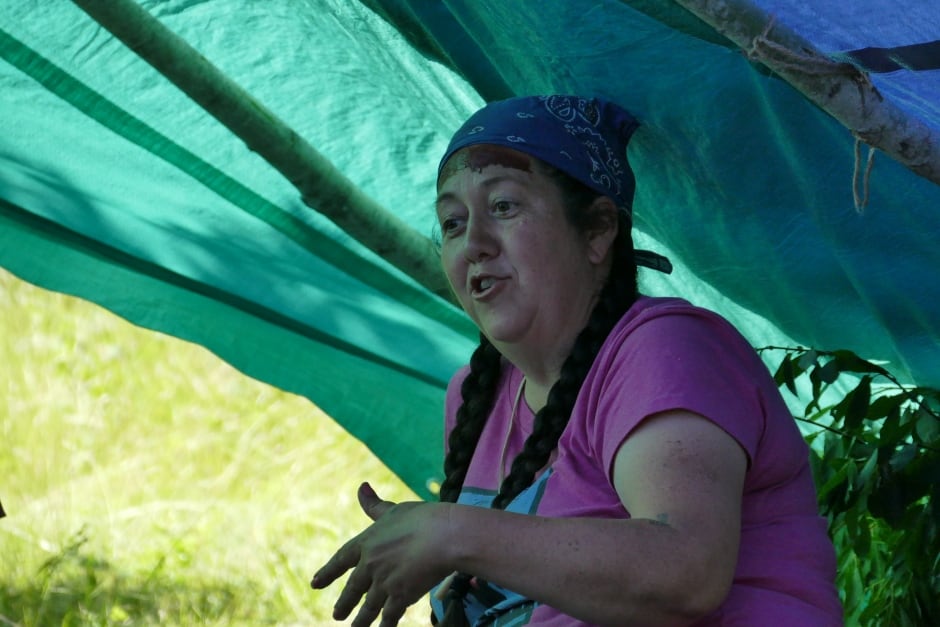 Christi Belcourt, a Métis visual artist whose work has been displayed in art galleries, used by Italian fashion designers and shown on protest banners across North America, speaks inside the language wigwam at the Great Water Gathering. (Lenard Monkman)

For Belcourt, the placards that people bring to protests usually have text on them, and she says the messaging can often get lost in the sea of signs.

“When you have [one or two] strong images that say “water is life,” it gives the people a voice, in a way that the placards don’t,” she said.

“What I really like about that is the idea that art gets the last word.”

What does it mean to be a water protector?

Many of the people that travelled to the gathering told stories of their own community’s water situation, from boil water advisories to rivers and lakes being poisoned by industry.

For Murdoch, these stories are familiar, as his own community – Serpent River First Nation, Ontario – does not have access to clean, safe drinking water.

“My daughter is four years old and she has never known what it’s like to drink water out of the tap. She actually believes — we’ve trained her to believe — that if she drinks it, she could die. That’s how bad it is,” said Murdoch.

“My daughter has grown up in an age where, the very thing that gives us life, could also take her life by simply drinking it.”

With stories of once being able to drink water from rivers and streams, to children having no access to clean drinking water today, it is easy to see why Indigenous people are advocating for the generations ahead.

Belcourt offers a description of what it means to be a water protector.

“A water protector is anyone who takes any kind of action for the protection of water, and for the love of water,” she said.

Despite there not being clean drinking water in his own community, Murdoch is optimistic that things will get better for his own daughter.