The hunt for HMS Erebus and HMS Terror was tough enough.

Now Parks Canada underwater archeologists are sorting out just how they will try to unlock the clues to the Franklin Expedition mystery that may be hidden in the wrecks of the reinforced British warships that lie in the icy waters of Nunavut.

“We are ready to get into what we consider is going to be one of the most complex and challenging underwater archeological excavations in Canada,” Marc-André Bernier, manager of underwater archeology for Parks Canada, said of what comes next for exploring the Erebus site in Wilmot and Crampton Bay.

For one week at the end of August, a six-person team of underwater archeologists is planning to be at the site, diving from inflatable boats and working from a base camp on a nearby island.

Parks Canada said Friday the work will include preparations for the next phase of exploration of the Erebus, which is expected to continue for several years.

A Parks Canada archeologist gets a close look at damage to the hull and structure of HMS Erebus. (Parks Canada)

But with Erebus and Terror, it seems, little comes simply. There are ongoing questions over future ownership and security of the site.

And even this year’s exploration has had its hiccups. The planned program isn’t what Parks Canada initially had in mind, when it first proposed an archeological investigation of up to four weeks, with 14 people on site.

Things changed when the agency realized its hopes to have a newly refitted research vessel on base this summer weren’t going to work out.

The RV David Thompson, a 228-tonne former coast guard vessel transferred to the agency, is still in a shipyard in Nanaimo, B.C.

Bernier said there were a number of factors at play, including unforeseen work required on a vessel at midlife, and more stringent requirements than were anticipated for its recommissioning.

“Preparation is key for this vessel so we want to make sure that before we bring it up to the Arctic, everything is in top condition.” 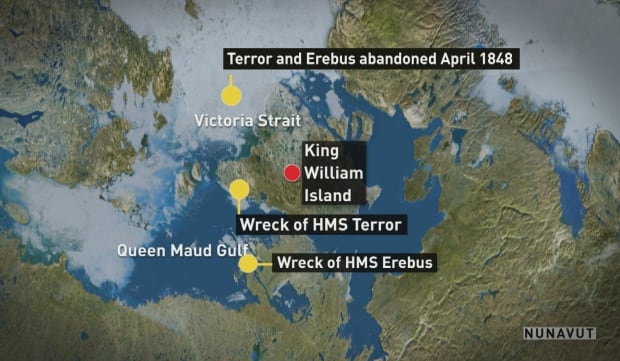 A barge that is intended to play a major support role for work exploring the wreck sites also won’t be in place in time for this year’s season, but Bernier anticipates it will be for next summer.

“We’re not going to start until we have all the right pieces together and [the RV David Thompson] unfortunately was delayed but we still have a lot of work to do,” said Bernier.

“It has changed our plans but basically … we’re starting the next phase. It’s going to be extremely complex.”

While Parks Canada archeologists are at the Erebus site later this month, they hope to “try to get deeper into the wreck”  with a remotely operated vehicle, Bernier said, and boost their knowledge of just what lies inside the timbers of the ship that was one-half of the mid-19th-century expedition led by John Franklin to find the elusive Northwest Passage.

The ROV will have video cameras, and archeologists hope to gain access to the engine room, along with getting a look inside the coal bunkers with point-of-view cameras.

They’ll also be laying the groundwork for the underwater excavation they hope to do — and which many hope will reveal key clues to understanding how the expedition came to its sad demise, with its loss of Franklin and 128 crew.

Where should the barge go?

That means figuring out — among other things — how and where to position the barge so it can support equipment to remove sediment, provide a place from which the divers can dress and have a hyperbaric chamber on site in case of any diving accident.

Work will also be done for the “Guardian” program that will see Inuit heavily involved in efforts to protect and monitor the sites.

No further work is planned this summer at the HMS Terror site, about 100 kilometres north in the appropriately named Terror Bay off King William Island, where that wreck was found last year.

Underwater archeologists recorded nearly 10 hours of video of the wreck during an ice dive in April. 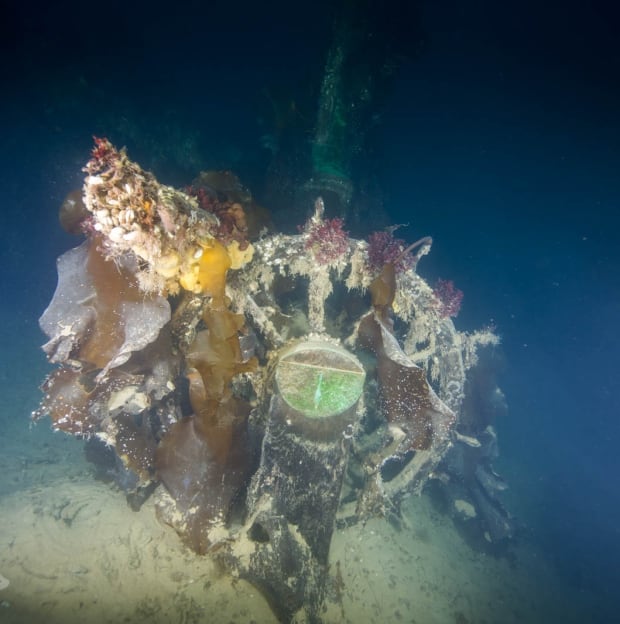 The helm of HMS Terror, viewed from the stern, with the mizzen-mast in the background. (Parks Canada)

“As far as Terror is concerned, I think we’ve reached our objectives for this year already,” said Bernier.

Archeologists are assessing what they know about the site to help prepare for further exploration of a wreck that presents a considerably different scenario than Erebus.

With Erebus, “we had to figure out, OK, how are the decks damaged, what is the extent of the preservation [that] we have,” said Bernier. In ways, he said, it’s a puzzle that has to be put back together.

With Terror, it’s a different story.

“Terror seems to be almost lying on the bottom as it would have been floating 160 years ago, the masts and the rigging being damaged but the rest is in an astonishing state of preservation,” said Bernier.

“HMS Erebus is located in shallower waters and is therefore more susceptible to storm and ice damage. HMS Terror is in deeper water and less susceptible to damage from the freeze-and-thaw pattern, which explains why it appears to be in better shape than HMS Erebus.” 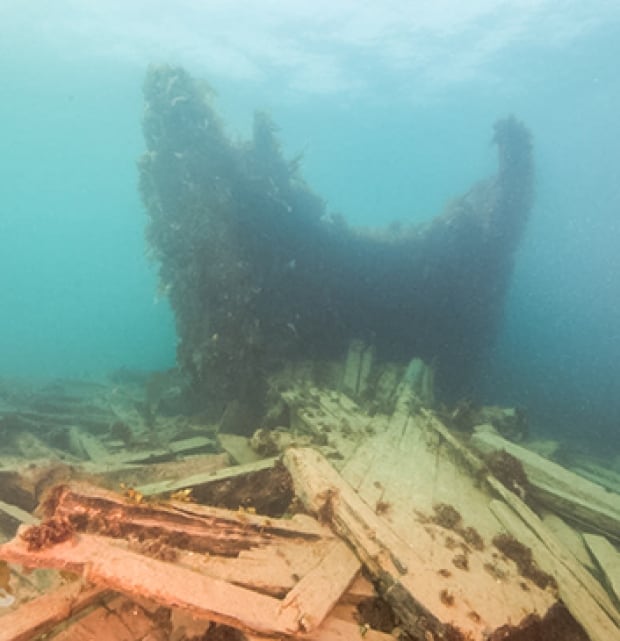 Debris is scattered on the ocean floor around the Erebus wreck. Behind the stern, there is a section of diagonal deck planking, part of the design specific to HMS Erebus and HMS Terror. (Parks Canada)

Still, the examination of the Terror site has presented some tantalizing hints of what might have happened toward the sad end of the Franklin Expedition.

“There’s a lot of conclusions we already have,” said Bernier. “We know for certain, for example, that the ship was not at anchor when it went down.”

There have also been questions about whether the ship was closed up for abandonment — or winterized — but underwater archeologists have seen some of the hatches are partly open. 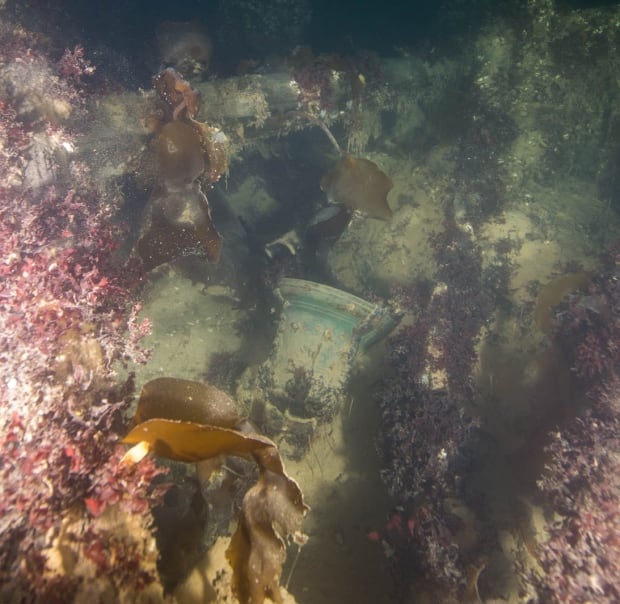 The bell of HMS Terror lies on the upper deck. (Parks Canada)

“We still need to understand the reason for it but it doesn’t have that feeling of being all closed up.”

The propeller isn’t in place. Nor is the rudder — maybe it’s on the sea floor. “Was it removed for winterization — we don’t know,” says Bernier.

For those who watch the exploration of the Erebus and Terror sites from afar, the anticipation of what the underwater archeologists may discover is immense.

“The thing about the Erebus and the Terror is that it’s like setting up the Hubble Space Telescope, not really knowing what you’re going to find but excited about it every day because the potential of finding something great is there,” said author and longtime Franklin sleuth David Woodman.

“This is King Tut’s tomb underwater…. So even if they find nothing that illuminates the Franklin story or the tragedy or the mystery, which is what most of the general public want, the archeologists are overjoyed. There’s decades of that kind of work to be done.” 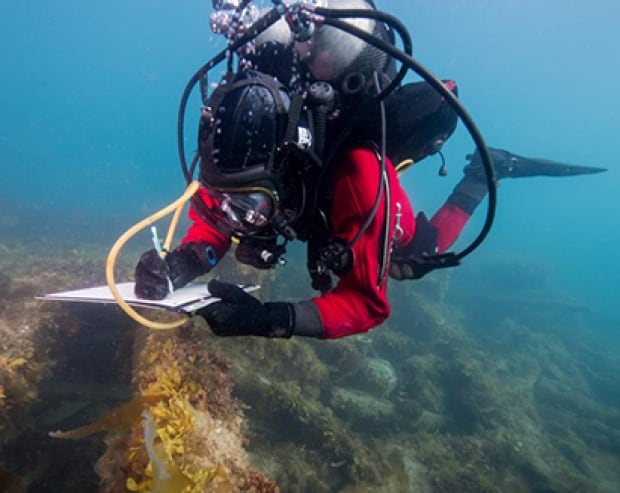 Given that there could be the risk of collapse in certain areas of the wreck of HMS Erebus, Parks Canada archeologists see some urgency in recording as much information as possible during their dives. (Parks Canada)

Woodman, a retired BC Ferries captain living in Port Coquitlam, B.C., takes any delay in exploration of the sites in stride. Working in the Arctic is always uncertain — the weather and the wind and the sudden storms that can pop up could “kill the whole thing.”

“We can’t expect that every year there’s going to be something dramatic done, just like finding it was a long slog,” said Woodman, whose book Unravelling the Franklin Mystery: Inuit Testimony, published in 1991, urged careful study of Inuit testimony to try to narrow down where the ships would be.

“The analysis will be a long process [and] perhaps years go by without anything newsworthy, but they’re working slowly and carefully and professionally and that’s the way it should be done.”