A national charity that helps seniors care for and re-home their dogs is expanding to Western Canada.

ElderDog pairs people who are unable to look after their pets with volunteers to walk, groom or adopt the animals.

“I can really see a niche for this,” said Del Rackette, the self-proclaimed “crazy dog lady” who launched the branch in Edmonton.

“The dog is a member of the family, so to just give it up … they’ve got enough stresses in life and quite frankly seniors are forgotten a lot of times so I think it’s very important.”

Del Rackette launched an ElderDog society in Edmonton, the first and only branch in Western Canada. (Zoe Todd/CBC)

The Nova Scotia-based charity relies on a network of volunteers.

Edmonton’s branch formed in March and is the only ElderDog in Western Canada. Members of the group have sucessfully re-homed six dogs in Alberta and B.C.

“We’re struggling with getting organized quickly enough to accommodate these people,” said Ashley Smith, one of the volunteers.

“It’s certainly our goal to be able to deal with elder dogs everywhere and to support people and elders everywhere.” 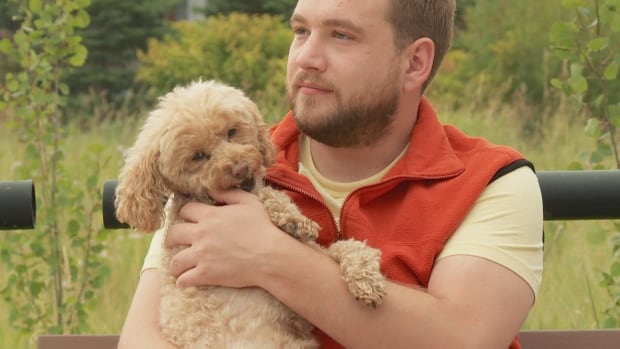 Tanner, an 11-year-old dog, plays with an ElderDog volunteer in Edmonton. (Zoe Todd/CBC)

Smith joined ElderDog to help people like her mother, whom she lost to Alzheimer’s disease.

“We can’t cure Alzheimer’s and dementia yet, but we can certainly help people survive this with more dignity,” Smith said.

She adopted an 11-year-old dog named Tanner through ElderDog. His former owner had to give him up after applying to live in a seniors’ home.

“I talked to him like crazy all the time,” said 78-year-old Maria Derksen, who grew old with Tanner.

“I definitely miss him but it’s for the better. I just wasn’t the one to look after him anymore.”

Derksen receives regular updates and pictures of her long-time canine companion from Smith, but said she can’t bring herself to visit him.

“I think he would be upset with me,” Derksen said.

“I’m just imagining him like really barking at me like crazy, like mad at me for leaving him alone and not being with him anymore. But I’m just happy that he’s got a better place.”