Standing in the front room of Jennifer Leeming’s bi-level in Calgary’s Marlborough Park neighbourhood, it’s hard to see the “bright and spacious” home she rented out last November to a young couple with four children.

Cigarette butts scatter the hardwood floors, bags of garbage fill the sun room, several holes pierce the walls and the toilet bowl in the main bathroom sits full of waste.

“It was so overwhelming that it took me quite a few weeks just to process the extent of what we were seeing, what we were dealing with, what had actually been done to this place.”

The front railing was ripped off, carpets in the basement were torn out, windows were broken and the renters left behind all their furniture.

Leeming says she later learned the tenants were renting out rooms in the house on Airbnb.

Yet in the midst of the destruction and filth sits a kid’s lunch box and toys, reminders of the kind and friendly family who Leeming felt bad for when they couldn’t pay December’s rent.

“Early on, they’d indicated they fell on hard times. We felt we could not add to those hard times, and I chose not to evict them but to work with them, as they said they were going through losing their job three times and approaching social agencies,” she said.

But the rent kept sliding.

Eventually,  Leeming — a single mother of a 12-year-old boy — contacted those same social agencies and found out the tenants’ story was dubious.

So, in early March she decided to give the couple two-weeks’ notice. But when she came to deliver it,  she says she saw broken windows and a missing door, the locks had been changed, and still no effort to pay the rent, so she returned with  a 24-hour eviction notice.

“The tenant told me she was not moving until I could produce a court document forcing her to move,” she said. 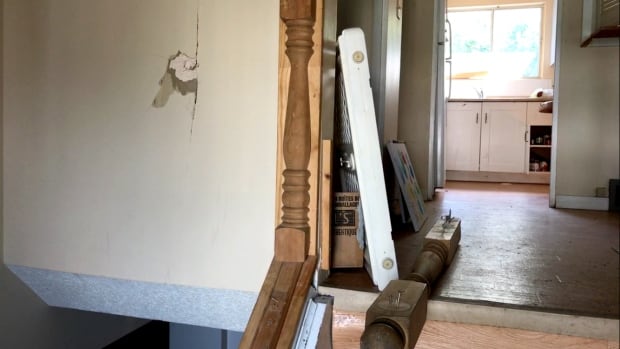 Holes were left in walls and railings were ripped off in Jennifer Leeming’s rental unit. (Colleen Underwood/CBC)

Leeming went to the Residential Tenancy Dispute Resolution Service (RTDRS), an alternative to court, to get the proper paperwork. That took more than two weeks.

“In the interim, she now knows she’s being served, she’s still on Airbnb and she’s still got people in here, and she disappeared to Saskatchewan,” said Leeming.

“So we were left with worse than what we even thought we were going to be dealing with by the time we get it through the courts.” 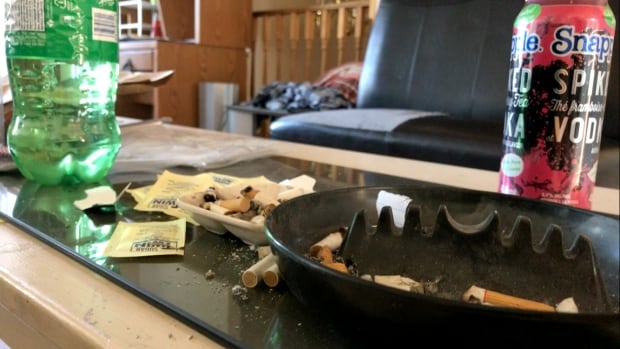 Calgary lawyer Allie Laurent says it can be a long, drawn-out process for landlords to evict a problem tenant.

First of all, she says 24-hour notices are not effective unless the tenant is easily scared.

“If they’re not very scared, then they’re not going to do anything and you are in a situation where you are going to have to enforce your notice and that’s kind of what I think bogs the system down,” she said.

“If they had better provisions, it’s still a bit vague as to when you can evict someone, what breaches those grounds and there aren’t very many written decisions in tenancy law,” said Laurent. 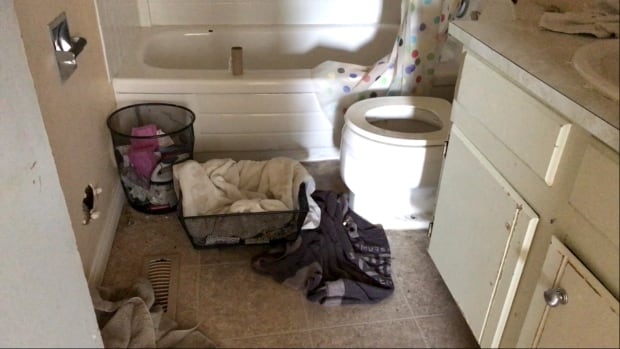 Dirty towels and clothing were left in a bathroom. (Colleen Underwood/CBC)

But Laurent suggests landlords and tenants try to avoid using confrontational eviction notices. Instead, she says, both parties should agree to rip up their current lease agreement and pick a new move-out date.

“If everyone can take a step back and look at it in the long term, it’s going to be the easiest resolution for everyone,” she said.

Otherwise, tempers can flare and tenants may take it out on the property, Laurent says.

Leeming hasn’t had a contractor come to the investment property yet to estimate the damages and cleanup required. She just knows she can’t afford it.

Her insurance policy doesn’t cover tenant vandalism, and she says the problems they’ll fix would require a $5,000 deductible, per occurrence.

Leeming says she has considered selling the property as is, but her realtor told her she’d take about an $85,000 hit.

“I just feel it’s so unfair. I’ve worked my entire life to provide for my family and my child’s future and people have come along and taken that all away and that’s just so wrong,” she said. 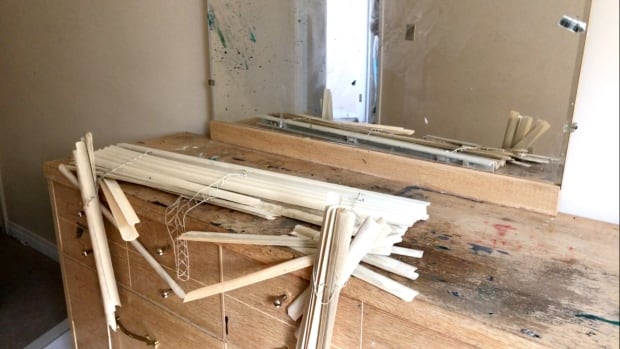 Now Leeming urges others to do their due diligence, although she believes she did, and that’s why she says she’s sharing her story.

In the meantime, Leeming is hanging up her landlord keys.

“There’s just not the financial stability for people, there’s not the moral responsibility. It seems that we’ve just become the next bank of mom and dad that people feel they can tap into,” she said.

A spokesperson for Service Alberta says, on average, it takes the RTDRS 10 business days to process eviction orders.

And since being created in 2006, the RTDRS has processed 80,000 claims that may have otherwise tied up the court system.