Some intersections along the southeast part of the line will be harder hit than others.

Once the southeast leg opens in 2020, eastbound commuters turning left on Whyte Avenue during morning rush hour can expect to wait seven minutes at the turn. By 2044, that wait will increase by another minute.

Morning traffic currently sits at the turn less than one and a half minutes, according to the data.

The evening rush is expected to fare even worse, with an average wait time close to nine minutes once the Valley Line opens. By 2044, the wait is expected to take longer than 12 minutes.

If wait times become unreasonably long, the city has not ruled out closing specific turns to vehicle traffic.

‘Quite frankly, we would prefer the individuals not get in their car but they get on the LRT.’ – Adam Laughlin, deputy city manager of integrated infrastructure services

“There are no silver bullets to traffic issues in a growing city,” said Adam Laughlin, the deputy city manager of integrated infrastructure services.

“There are lots of commuter choices,” he added. “Quite frankly, we would prefer the individuals not get in their car but they get on the LRT.”

The Valley Line LRT is also designed to flow through intersections alongside traffic, which Laughlin said will eliminate the need for train stopping lights.

Point of no return

Construction on the southeast leg of the Valley Line has already started. As a result, Laughlin said it’s too late to change the design plan.

“The line has been designed, planned [and] selected on the basis of council’s approvals along the way,” he said.

“Are there design changes that can happen at an intersection? Potentially, but they’re not going to be significant.”

But Coun. Mike Nickel said city council might have made different decisions if its members had known the detailed projections sooner.

‘I think the data could have been made available earlier and it would have informed some of our decisions better.’ – Coun. Mike Nickel, Ward 11

Nickel read the new numbers Thursday, after they were released publicly. The report won’t be brought to executive council until Aug. 22.

“I walked away with a ‘suck it up, buttercup,’ moment,” Nickel said. “It kind of felt like, ‘This is the way it’s going to be.’

“If that’s the way it’s going to be, I’m going to have to deal with all the impacts that are going to come out of it — that’s all you can do.”

The Valley Line cuts through Ward 11, which Nickel represents. He said he’s worried about drivers short-cutting through residential neighbourhoods if they become impatient at intersections.

“I think the data could have been made available earlier and it would have informed some of our decisions better,” he said.

“Given that most of the line is in Ward 11, I would have really appreciated that information.”

Nickel said he has been asking for more detailed information for the past three years.

Coun. Mike Nickel says he’s ‘desperately trying to avoid’ a repeat of the Metro Line experience with the Valley Line, which will cut through his ward. (Zoe Todd/CBC)

Due to confidentiality agreements with companies bidding for the Valley Line LRT contract, Laughlin said the detailed projections couldn’t be shared sooner.

Instead, councillors received projections based on a graded system, by which intersections along the southeast branch of the Valley Line LRT received a grade from ‘A’ to ‘F.’

A grade of ‘A’ reflects a wait time of less than ten seconds, while an ‘F’ grade is given to any turn with a wait time longer than 80 seconds.

“Now that they finally roll out the numbers, we get to see where a lot of the problems are,” Nickel said. “What I found interesting is that our administration doesn’t consider ‘F’ a fail, they just consider it congested.

“When I asked them what they considered to be a failed intersection, they really couldn’t give me an answer.”

Many of the affected intersections are already problematic, he added.

“I don’t think the LRT makes a significant difference to them,” Henderson said. “For the main flow of traffic, it probably should help.”

One train can replace 600 cars, according to the data released Thursday.

“It’s the only way we’re ever really going to be able to deal with the sheer volume of people we need to move through the core parts of our city.”

The Valley Line LRT is a 27-kilometre network that will link Mill Woods Town Centre with Lewis Estates in the west end, passing through the downtown core. 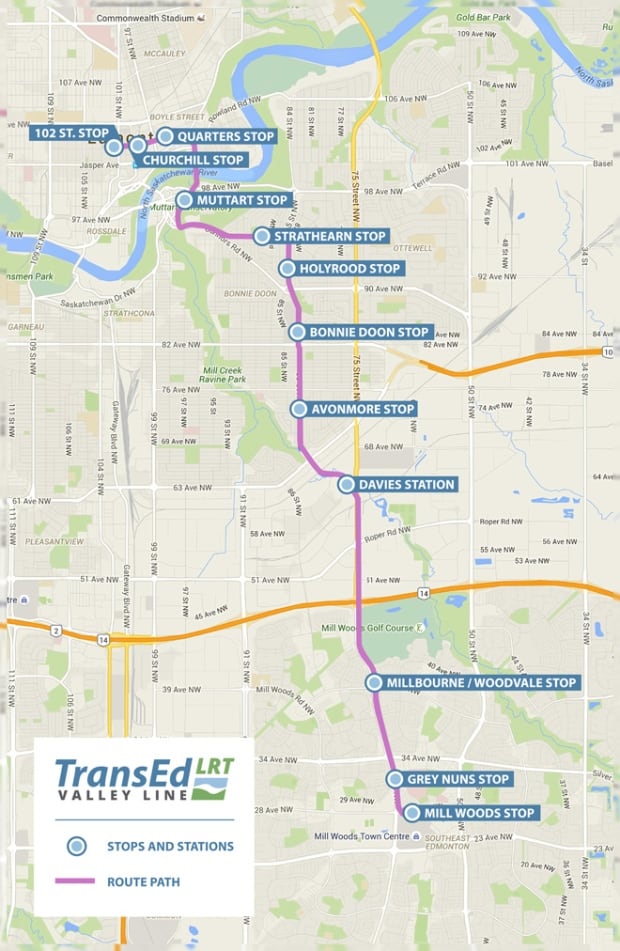 The route for the first phase of the Valley LRT Line. (TransEd)