Matt writes: One of the most praised films on RogerEbert.com this year has been David Lowery’s audacious and unforgettable “A Ghost Story,” reuniting the director with his “Ain't Them Bodies Saints” stars Rooney Mara and Casey Affleck. Brian Tallerico praised the picture upon his initial viewing of it at Sundance, and programmed it as the closing night selection at this year’s Chicago Critics’ Film Festival, where it played to a packed house. Tallerico later interviewed Lowery for the site, while Matt Zoller Seitz awarded the film four stars. Also worth a look is Noah Gittel’s recent essay on Lowery and the “cinema of narrative displacement.” Below is the trailer for the film…

The Disaster Artist (2017). Directed by James Franco. Written by Scott Neustadter and Michael H. Weber (based on the book by Greg Sestero and Tom Bissell). Starring James Franco, Dave Franco, Seth Rogen. Synopsis: A behind-the-scenes look at the making of Tommy Wiseau’s “The Room.” Opens in US theaters on December 8th, 2017.

(2017). Directed by Peter Nicks. Synopsis: A documentary that goes inside an embattled urban police department struggling to rebuild trust in one of America’s most violent yet promising cities. Opens in US theaters on September 15th, 2017.

Marjorie Prime (2017). Written and directed by Michael Almereyda (based on the play by Jordan Harrison). Starring Jon Hamm, Geena Davis, Tim Robbins. Synopsis: A service that provides holographic recreations of deceased loved ones and allows a man to come face-to-face with the younger version of his late father-in-law. US release date is TBA.

The Vault (2017). Directed by Dan Bush. Written by Dan Bush, Conal Byrne. Starring James Franco, Taryn Manning, Francesca Eastwood. Synopsis: Two estranged sisters are forced to rob a bank in order to save their brother. But this is no ordinary bank. US release date is TBA.

Thelma (2017). Directed by Joachim Trier. Written by Joachim Trier and Eskil Vogt. Starring Eili Harboe, Okay Kaya, Ellen Dorrit Petersen. Synopsis: A woman begins to fall in love, only to discover that she has fantastic powers. US release date is TBA.

Le Redoubtable (2016). Written and directed by Michel Hazanavicius (based on the autobiography by Anne Wiazemsky). Starring Louis Garrel, Stacy Martin, Bérénice Bejo. Synopsis: During the making of one of his films, French film director Jean-Luc Godardfalls in love with 17-year old actress Anne Wiazemsky and later marries her. US release date is TBA.

Brad’s Status (2017). Written and directed by Mike White. Starring Ben Stiller, Austin Abrams, Jenna Fischer. Synopsis: A father takes his son to tour colleges on the East Coast and meets up with an old friend who makes him feel inferior about his life’s choices. Opens in US theaters on September 15th, 2017.

Triple Threat (2017). Directed by Jesse V. Johnson. Written by Joey O’Bryan and Paul Staheli. Starring Michael Jai White, Scott Adkins, Tony Jaa. Synopsis: A hit contract is taken out on a billionaires daughter intent on bringing down a major crime syndicate. A down and out team of mercenaries must take on a group of professional assassins and stop them before they kill their target. US release date is TBA.

Beach Rats (2017). Written and directed by Eliza Hittman. Starring Harris Dickinson, Madeline Weinstein, Kate Hodge. Synopsis: An aimless teenager on the outer edges of Brooklyn struggles to escape his bleak home life and navigate questions of self-identity, as he balances his time between his delinquent friends, a potential new girlfriend, and older men he meets online. Opens in US theaters on August 25th, 2017.

Bright (2017). Directed by David Ayer. Written by Max Landis. Starring Will Smith, Lucy Fry, Joel Edgerton. Synopsis: Set in a world where mystical creatures live side by side with humans. A human cop is forced to work with an Orc to find a weapon everyone is prepared to kill for. Debuts on Netflix on December 22nd, 2017.

Rebel in the Rye (2017). Written and directed by Danny Strong (based on the biography by Kenneth Slawenski). Starring Zoey Deutch, Kevin Spacey, Nicholas Hoult. Synopsis: The life of celebrated but reclusive author, J.D. Salinger, who gained worldwide fame with the publication of his novel, The Catcher in the Rye. Opens in US theaters on September 15th, 2017.

Proud Mary (2018). Directed by Babak Najafi. Written by Steve Antin, John Stuart Newman and Christian Swegal. Starring Taraji P. Henson, Neal McDonough, Danny Glover. Synopsis: The life of a hit woman working for an organized crime family in Boston is completely turned around when she meets a young boy whose path she crosses when a professional hit goes bad. Opens in US theaters on January 12th, 2018.

Ready Player One (2018). Directed by Steven Spielberg. Written by Zak Penn, Ernest Cline and Eric Eason (based on the novel by Ernest Cline). Starring Hannah John-Kamen, Mark Rylance, Ben Mendelsohn. Synopsis: When the creator of an MMO called the Oasis dies, he releases a video in which he challenges all Oasis users to find his Easter Egg, which will give the finder his fortune. Wade Watts finds the first clue and starts a race for the Egg. Opens in US theaters on March 30th, 2018.

It (2017). Directed by Andrés Muschietti. Written by Chase Palmer, Cary Joji Fukunaga and Gary Dauberman (based on the novel by Stephen King). Starring Bill Skarsgård, Jaeden Lieberher, Finn Wolfhard. Synopsis: In Derry, Maine, seven friends come face-to-face with a shape shifter, who takes the form of an evil clown who targets children. Opens in US theaters on September 8th, 2017.

Matt writes: Brian Tallerico recently had a blast covering the Fantasia International Film Festival in Montreal, and highlighted many enticing pictures that could easily slip past one’s radar. For the table of contents compiling his complete coverage, click here.

Matt writes: I also had the tremendous honor last month of interviewing my favorite actor of my generation, Michael Cera, about his two new films, “Person to Person” and “Lemon.” I also got the chance to ask him about many other key roles in his career, including his recent scene-stealing turn as Wally Brando on David Lynch‘s Showtime series, “Twin Peaks: The Return.” For our complete conversation, click here. 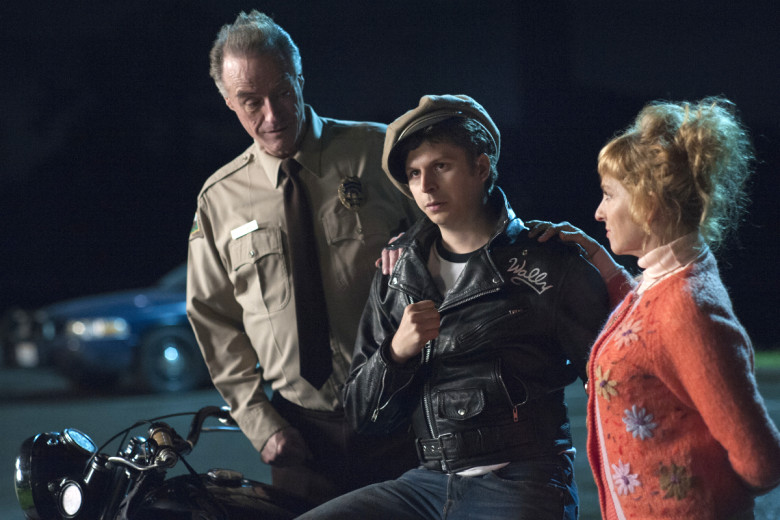 Amblin’ (1968). Written and directed by Steven Spielberg. Starring Richard Levin, Pamela McMyler, Henry Axelrod. Synopsis: They were both wanderers but to be more specific…Hippies.