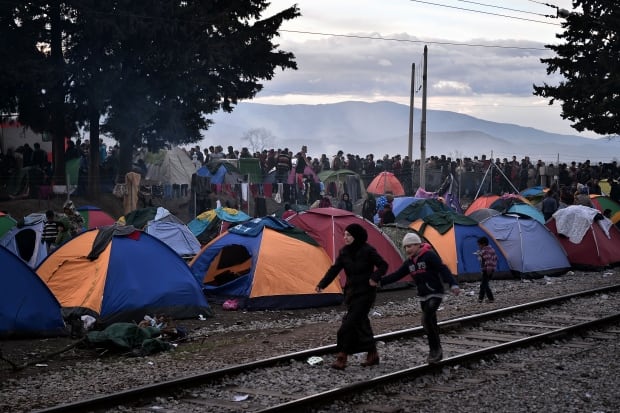 Migrants stranded on the Greece-Macedonia border expressed despair and frustration on Saturday, ahead of another day of queuing and waiting.

More than 30,000 refugees and migrants are stuck in Greece due to progressive border closures further up the “Balkan corridor,” the route taken to get into wealthier central and northern Europe.

Conditions are said to be deteriorating the most at the Idomeni crossing where around 12,000 people were stranded after Austria and the Balkan states imposed strict limits last month on how many can cross the border from Greece.

A woman and a boy walk along the railway track as refugees and migrants wait for food in a makeshift camp at the Greek-Macedonian border on Friday. (Louisa Gouliamaki/AFP/Getty Images)

The men, women and children, mainly from Afghanistan, Syria and Iraq, are sleeping rough in freezing temperatures, relying on aid agencies to provide them with food, water and other basic supplies.

“We sleeping in cold weather and the rain coming down and we’re getting wet, all the batania (blankets) getting wet. We go out, we wake up two o’ clock in the morning, we stay outside and make some fire, said 64-year-old Abdul from Syria. 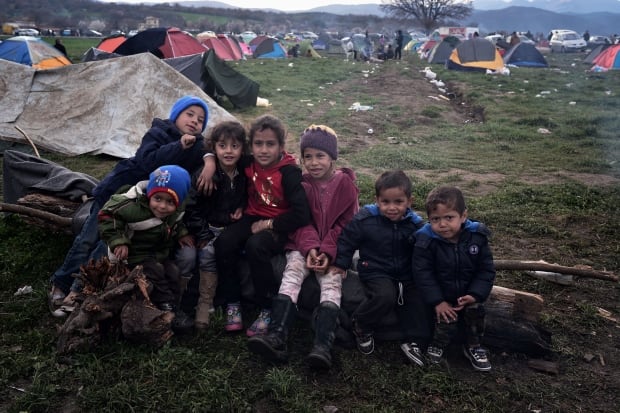 Children sit in the makeshift near the village of Idomeni. (Louisa Gouliamaki/AFP/Getty Images)

“And then, every other night, maybe few days we get rain and we’re getting cold and we got no batania (blankets).  We make a little fire to stay until morning,” he said.

Abdul left war ravaged Homs for Europe’s safety over a month ago but has been stranded in Greece for more than two weeks. 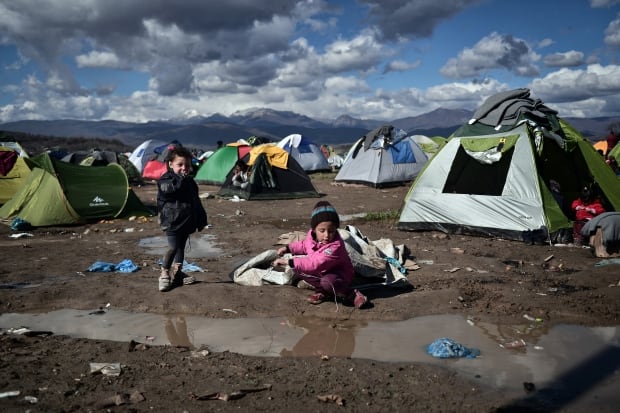 “We’re suffering, all suffering here. We run away from the war, they doesn’t want to let us to pass, I don’t know what the situation. We need a solution, yes or no. Kick the people out or let the people in, as well as this. You have to wait for a little soup like this, maybe two hours in the evening. That’s…this… they’re not treating fair refugees that run from the war,” he said.

Another Syrian refugee, 35-year-old Salam from Aleppo, has been stuck at the border for over a week. He says his wife and two-year-old child are both sick.

The makeshift camp in Idomeni was visibly larger on Saturday with new tents sprawling across the fields.

Aid agencies estimate that about 1,000 migrants arrived at the border on Friday while the UNHCR says only 187 people were allowed to cross into Macedonia.