Want to see some films that are guaranteed to rank among the year’s very best? Chicagoans should look no further than DOC10, the three-day documentary festival scheduled to run from Friday, April 1st, through Sunday, April 3rd, at the Music Box Theatre, 3733 N. Southport Ave. It’s the inaugural installment of an A-grade movie marathon from the Chicago Media Project, offering ten Windy City premieres of pictures that earned raves on the festival circuit. I was fortunate enough to have seen one of them, the sublime “In Transit,” at last summer’s AFI Docs festival in Washington, D.C. As a final bow for Albert Maysles, the late trailblazer behind such classics as “Salesman” and “Grey Gardens,” it is an overwhelmingly poignant achievement. He made the film with four co-directors—Lynn True, David Usui, Nelson Walker and Benjamin Wu—from the Maysles Documentary Center, and he was able to view a completed cut before his death last March at age 88.

When Josh Golden, co-founder of Ebert Digital, boarded Amtrak’s Empire Builder in December 2013, and settled in for a scenic train ride through the Pacific Northwest, he ended up meeting Maysles and his crew. The younger directors were helping Maysles realize a dream he had been harboring for decades to make a film about the unlikely connections that developed between people while in transit. In a letter distributed to passengers, Maysles wrote, “If life is a journey, we are all fellow travelers. When I have journeyed on trains, I have seen people come together who in no other way would possibly meet. On trains, we discover a unique intimacy, where normal conventions dissolve and we open our lives to complete strangers. Maybe it is because the train holds us in a limbo, a moment of truth between stations.” There are many ways in which that same limbo could be likened to the moviegoing experience, and there’s no doubt that moviegoers may find themselves having their own epiphanies while watching this delicately nuanced masterwork. Like many of the selections at DOC10, “In Transit” proves that a documentary doesn’t need a particular social agenda in order to be compelling, and can be as artful as any narrative feature. Here are four more highlights from this year’s festival… 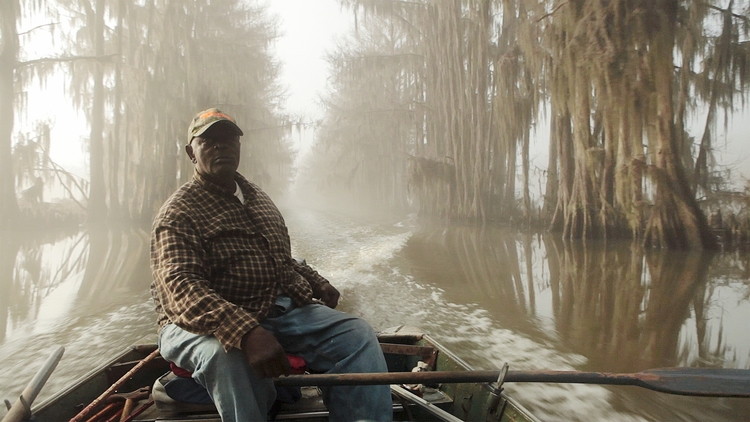 Winner of the Albert Maysles New Documentary Director Award at last year’s Tribeca Film Festival, “Uncertain” offers a lingering look at a way of life that is at risk of being rendered extinct by the passage of time. Reminiscent of DOC10 programmer Anthony Kaufman’s hand-picked selection at last year’s Chicago International Film Festival, Ostap Kostyuk’s equally haunting “The Living Fire,” this film is a sensory feast from its opening frames, as the camera glides through the inky darkness of a bayou. The nighttime setting would be relatively tranquil if it weren’t for the ear-deafening sound of insects. Perched inconspicuously on the Louisiana-Texas border, the town of Uncertain is a natural source of sight gags, as evidenced by signs declaring “Uncertain City Limit” and “The Church of Uncertain.” Yet co-directors Ewan McNicol and Anna Sandilands are aiming for far more than easy laughs. A handful of near-wordless sequences establish a vivid sense of the location, which appears to have been cut off from civilization, aside from the blaring of FOX news at the local bar. The biggest show in town is the annual fireworks display, and raccoons are seen less as nuisances and more as potential companions.

Many people have migrated to Uncertain in an attempt to escape the ghosts of their past. Others have become mired in their own shortcomings, unable to grasp at the possibility of inner growth. It eventually becomes clear that these broken souls are seeking some sort of redemption, though their futures remain as uncertain as that of the decaying lake, the destruction of which would spell certain doom for the town as a whole. The symbolism here is rather obvious, yet McNicol and Sandilands avoid any trace of preachiness, opting for vignettes that are purely observational. A particularly amusing subplot involves the Wile E. Coyote/Road Runner-esque battle between a man and a monstrous hog nicknamed Mr. Ed because of its horselike face. There’s also a wonderful moment in which a young diabetic muses on the inherent hypocrisy of church rhetoric, encouraging the downtrodden to put their struggles into God’s hands, while at the same time teaching that God works through you. So basically, the message is, “Help yourself.” 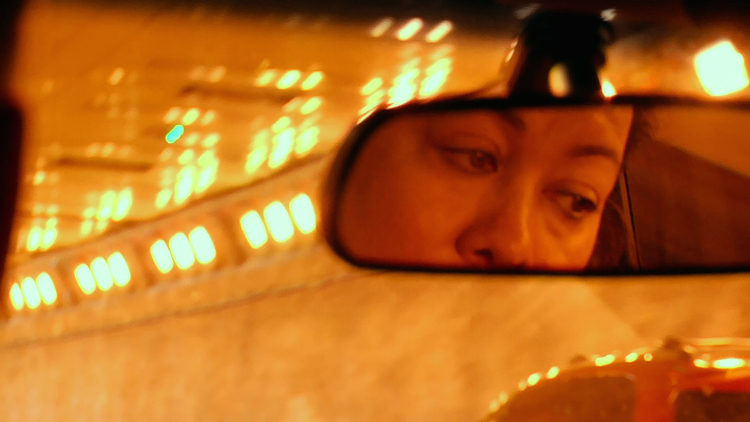 The intrinsic power of an artwork can grow into an obsession for those that it speaks to the strongest. That’s what happened to Manhattan art collector Martina Batan when she first encountered the work of New Orleans-based artist Roy Ferdinand. His paintings capture the grit and blood-spattered realism of the crimes that routinely took place on the streets of his city, which on multiple occasions had the highest murder rate of any major city in America. During an archival interview with Ferdinand, who succumbed to cancer in 2004, he ponders how New Orleans could be considered anything but a war zone in light of those statistics (his words carry shades of Spike Lee’s outrage in “Chi-Raq”). His mother would often object to the violent imagery he was depicting, until she realized that they had been ripped directly from the daily headlines. Perhaps it was Ferdinand’s mission to honor the memory of “absent people” by immortalizing them on his canvas that so deeply appealed to Batan, considering that her own brother was senselessly killed was he was only 14.

The weight of Batan’s grief resonates throughout David Shapiro’s “Missing People,” a deeply moving ode to the life-altering impact that one person’s creative vision can have on another. Dubbed by her friend, writer David Carrino, as a cross between Wednesday Addams and Holly Golightly, Batan is clearly a woman driven by her passion, which is linked to her need for closure regarding the unsolved case of her brother’s murder. As she hires a private detective to reopen the evidence from 1978, she journeys to New Orleans to meet and hopefully forge a bond with Ferdinand’s sisters, who have dealt with losses of their own in the years following Hurricane Katrina. Once they realize that Batan’s intentions are genuine, a tangible warmth and affection begins to blossom between them. Apart from being a first-rate drama, Shapiro’s film also succeeds as a welcome introduction to the ingenious work of Ferdinand, which deserves to be prominently featured in museums. His portrayal of the birth of Christ in a garage, with a wheelbarrow serving as the manger, is unforgettable, as is Shapiro’s inspired use of The Buzzcocks’ “Why Can’t I Touch It” over the end credits. 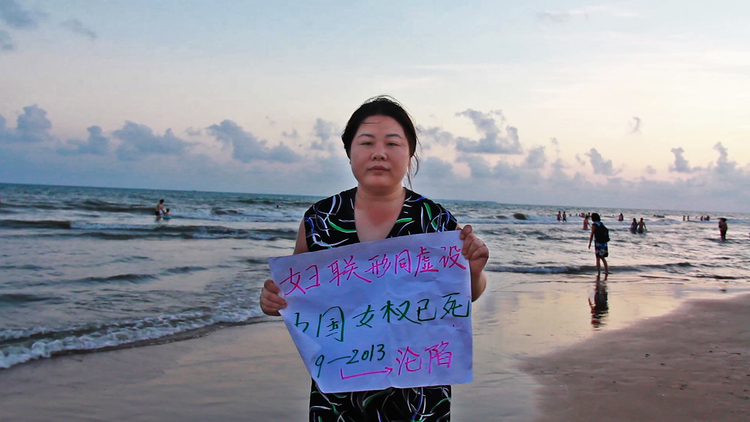 Nanfu Wang is not only the director of “Hooligan Sparrow.” She is a real-life hero who risked her life in order for the atrocities she captured with her lens to be viewed by a global audience, and the fact that she will be in attendance at the Chicago premiere of her film is a cause for celebration. It is miraculous that her film exists at all, and on top that, it also happens to be a heart-pounding thriller. Ye Haiyan (a.k.a. “Hooligan Sparrow”) is a Chinese activist not unlike Ai Weiwei, whose cheerful face frequently appears in photos supporting his female doppelgänger (Alison Klayman, director of 2012’s “Ai Weiwei: Never Sorry,” serves here as an executive producer). In order to raise awareness for HIV prevention, Haiyan lived the illegal life of a sex worker, distributing free condoms while claiming that they were government subsidies. One can’t help hearing this confession without picturing Brenda Myers-Powell, the subject of Kim Longinotto’s doc, “Dreamcatcher,” smiling in approval. Of course, the Chinese government does not approve, and does everything in its power to obstruct her efforts to shed light on what is, without question, an act of irredeemable evil.

School officials, including a principal, have been offering up students aged between 11 and 14 as bribes (and human sex toys) for government officials. When the victims of this abuse reveal what happened to them, they are penalized for child prostitution, while their parents are browbeaten into silence. Haiyan and her devoted group of fellow muckrakers refuse to let their cries for justice be stifled, even as they’re faced with eviction notices, physical violence and interminable jail time. Wang finds simple yet potent ways of accentuating the tension of various moments, such as when the subtitles of an emotionally charged conversation play out over the image of water racing past the camera, or when a chase up stairs is viewed in real time, as the screams of captured activists echo from the ground below. There’s even a plot twist straight out of a Hollywood mystery yarn. If only it were all a fantasy. 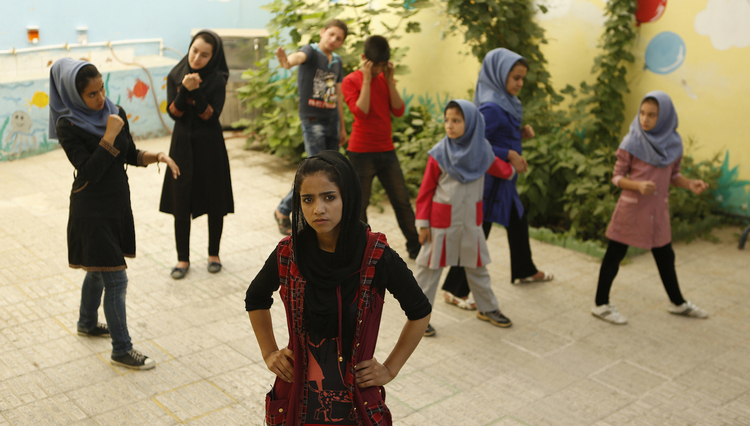 “When people judge women’s choices, they forget their sacrifices,” replies Haiyan toward the end of “Hooligan Sparrow,” as she reflects on the women who have been forced into marriage in order to secure their family’s financial stability. Afghan refugee Sonita Alizadeh could’ve easily become one of those women. Though the teenager has escaped into Iran and found temporary caregivers at the Tehran Society for the Protection of Work and Street Children, her family back home has other plans for her future. In order for her brother to afford a bride of his own, he must sell his sister into marriage. Alizadeh’s own mother proves to be no help, arguing that she was married off in the same way, and regardless of whether or not she was happy with her fate, it was tradition. In an exhilarating act of defiance, Alizadeh attempts to realize her dream of becoming a rap singer, despite the fact that women performing such music is expressly forbidden by her culture. The resulting music video that she creates for her self-penned song, “Brides for Sale,” is a scorching masterpiece that left me utterly speechless. Here is a young female warrior as fearless and triumphant as Malala Yousafzai, proclaiming a message of equality that is universal in its relevance.

Whereas “In Transit” was the best documentary I saw in 2015, “Sonita” is the best film I’ve seen so far this year, period. Director Rokhsareh Maghami is herself a feminist powerhouse, and her insistence on remaining an invisible presence in her own film doesn’t last long. An early scene of a child blowing bubbles at the lens sets up the notion that the camera—and the person operating it—will be a character in the film as well. At one point, Alizadeh looks at Maghami and asks if she’ll purchase her instead, to which the filmmaker asserts that it’s not her job to interfere, and that her ultimate goal is to capture the truth of her subject’s circumstances. Yet as the threats to Alizadeh’s freedom become increasingly urgent, even Maghami’s boom mic operator can no longer withhold his own opinions on camera, and the director realizes that she must take an active role in the story unfolding before her eyes. The final act of this film is as tense as any suspense picture I’ve seen, and when it arrives at its conclusion, none of the loose ends are wrapped in a superficially pleasing bow. All we’re left with is the irrefutable fact of this young woman’s existence, and how it is representative of the reality faced by countless women around the world. It’s not hard to understand why this film won both the Grand Jury Prize and the Audience Award in the World Cinema Documentary Competition at this year’s Sundance festival. The film’s virtues alone make its DOC10 screening at the Music Box the hottest ticket in town. The fact that Alizadeh will be there in person makes it essential.

For more information on the DOC10 festival, including showtimes and ticket links, visit its official site, as well as the Music Box site.