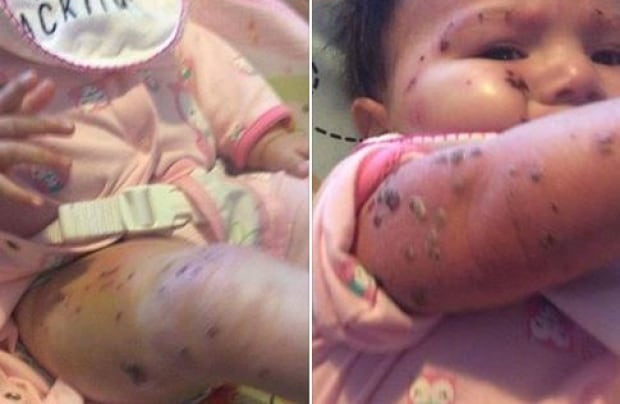 Doctors in Kashechewan First Nation say they have identified 19 children with skin conditions but no medical emergencies.

The diagnoses so far in the children aged one to the mid-teens is scabies, mild impetigo and eczema, said Keith Conn, associate deputy minister of Health Canada’s First Nations and Inuit Health branch. It’s unclear if the kids have a combination of these or one or the other.

There is a treatment regime in place. – Keith Conn, First Nations and Inuit Health

“The photos are alarming and disturbing but that doesn’t represent the community, according to Dr. Green, [who] saw all the children,” Conn said. “They’re at various levels of severity and infections. Some are milder than others.

“There is a treatment regime in place,” he added.

He noted that, in some cases, when eczema is not treated in a consistent way, it can be exacerbated.

“It can be very unappealing — as in the photos shared on Facebook,” Conn said.

“But according to Dr. Green, they’re not representative of the individual cases that he’s seen thus far.”

One of the children that appeared in the photos is being treated in Moose Factory, Ont., and doing well, he said. Another is in Timmins and another in Kingston.

As for the underlying causes of these skin conditions, a government official told CBC News said he couldn’t speculate. He noted people do seem fearful of their water and that the treatment plant isn’t functioning — but the water has been tested and is clean. (Derek Stephen/Facebook)

As for the underlying causes of these skin conditions, Conn said he couldn’t get into that.

He would only say that people do seem fearful of their water and that the treatment plant isn’t functioning. But Conn said the water has been tested and is clean.

“Health Canada has deployed a secondary run of tests yesterday, so we’ll have some results back in a few days,” he said.

The community has been concerned about the water quality issues as being a link or a cause. – Keith Conn, First Nations and Inuit Health

The perception of “some community members” that the skin rashes are linked to the water is “a trust issue,” Conn said. “The water results are meeting provincial and Canada safe-drinking-water guidelines.”

Dr. Murray Trusler, who was chief of staff at the Weeneebayko Aboriginal Health Authority until 2008, has been involved in teleconference calls on the current issues.

The children in the community tend to have skin that is dry and susceptible to eczema, Trusler said.

If they scratch their dry skin, he said, that allows for bacteria to get into their systems and form the scabbing and rashes. Overcrowding also lends itself to spreading the infections, he said.

Other factors that could make children feel itchy would be elevated chlorine in the water.