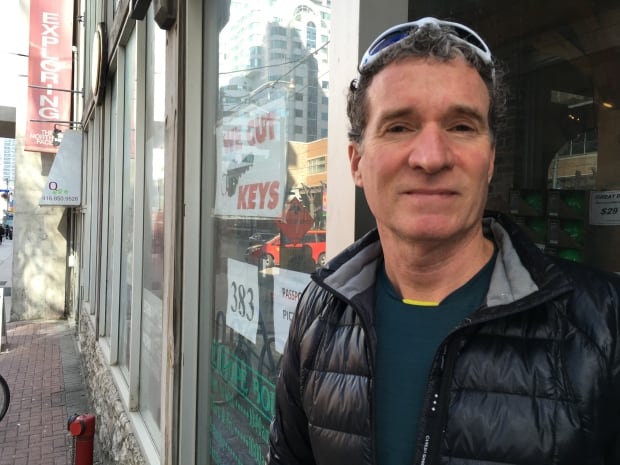 Last year around this time, Toronto adventure shop owner Joe Raftis was packing his bags for Nepal. This is the time of year when serious mountaineers head to Mount Everest, because weather conditions are deemed ideal for ascents.

Raftis made it to base camp, but that’s as far as his dream of summiting the tallest peak in the world went. He was in good company. No one reached the summit last year, the first time that had happened in decades, according to National Geographic.

On April 25, 2015, Raftis was at base camp and felt the building he was in — the mess tent — start to rattle. He ran outside to see a snow mass ripping down the mountain, headed right at him. Terrified and not knowing what to do, he turned and ran for his life.

Joe Raftis outside his adventure and travel store, Europe Bound, on King Street West in Toronto. Raftis survived avalanches at Everest base camp two years in a row. After last year’s deadly earthquake, he said he would never return to Nepal, but he’s reconsidering. ‘Never say never,’ he said in an interview with CBC News last week. (Sylvia Thomson/CBC)

He ended up blanketed in snow, but he survived. At least 18 other people who were at the base camp that day were not so lucky.

That was the day a 7.8 magnitude earthquake hit Nepal, killing thousands of people, including those engulfed by the avalanche at Mt. Everest base camp. More people were killed when a second earthquake hit several weeks later, bringing the total death toll close to 9,000.

That trip was Raftis’s second attempt at Everest, and he vowed at the time that it would be his last.

“When that avalanche came at me, I didn’t know if I would live or die,” he said in an interview with CBC News after the quake. “Some things are not worth the risk.”

The trauma and devastation brought on by the earthquake and avalanche seems to have deterred many from wanting to return to Nepal — at least in the short term. Some of the mountaineers, who bring an estimated $100 million to the Nepalese economy each year, worry about the stability of the mountain after the earthquake. 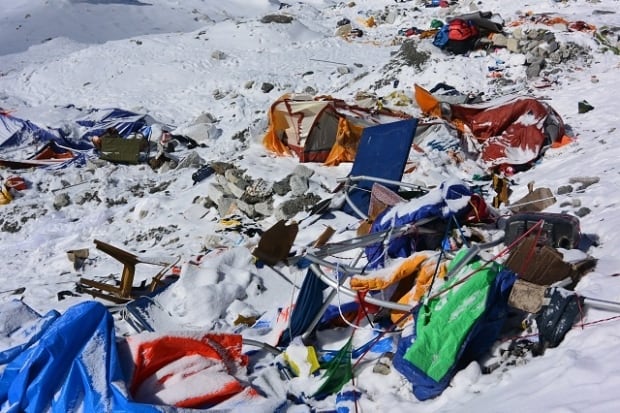 The 2015 earthquake and subsequent avalanche left a giant debris field of tents and climbing gear at the Everest base camp, above. (Melanie Southworth)

Nepal’s Department of Tourism told the Himalayan Times that it has received applications for Everest permits from 71 mountaineers this year and an additional 33 people are taking advantage of the two-year extension the government gave to people who bought permits last year and didn’t use them because of the earthquake.

In the past few years, the number of permits granted has been between 300 and 400.

Ted Atkins of Topout Oxygeneering, which supplies oxygen equipment to many Everest climbers, says it’s still early in the season and permits are still being issued, but he expects that climbing traffic will be down by more than half this year.

“My guess is it will, indeed, be the smallest number in 10 years,” he said from Kathmandu. “Time will tell as the permits are issued.”

Melanie Southworth, a British mountaineer who spends half the year training in Ottawa, where her partner lives, is one of those who will be returning to Everest this year if her permit is approved.

Southworth was on Everest in April 2014, at the same time as Raftis. Both were attempting their first summit when an avalanche killed 16 Sherpas. The two found themselves on Everest again last April, when the earthquake hit. This year, Southworth will be returning alone. 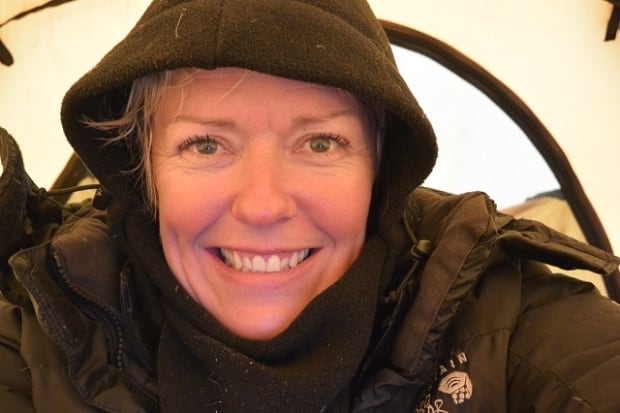 Melanie Southworth was at Everest base camp when the earthquake struck. The British climber, who spends part of the year training in Ottawa, has been hiking and trekking in Nepal for 20 years and is preparing to go back this spring to make her third attempt at reaching the summit of the world’s highest mountain. (Melanie Southworth)

“Third time’s a charm, as the Irish say,” Southworth said when reached by phone in England, where she was preparing gear for her return.

“I have a very big love affair with the mountain and with Nepal. It may be the biggest unrequited love affair of my life.”

Everest ‘in its purest sense’

Southworth said she doesn’t know anyone else who is going back for the third consecutive year but says she feels hardened by her experience and that she’s drawn to the country she has been visiting for 20 years. She’s also hoping the reduced number of climbers will make for a better experience.

‘It will be a real honour to be there with so few other people.’ – Melanie Southworth, British climber

More than 4,000 climbers have scaled the 8,850-metre high mountain since 1953, when Everest was first summited by New Zealand climber Edmund Hillary and Sherpa Tenzing Norgay. In recent years, the numbers have risen sharply, and when local guides and support staff are factored in, there can be as many as 1,000 people on the mountain per season.

“Everest has gone crazy in the past 10 years,” Southworth said. “Hopefully, we can experience it in its purest sense. I am so happy, and it will be a real honour to be there with so few other people.” 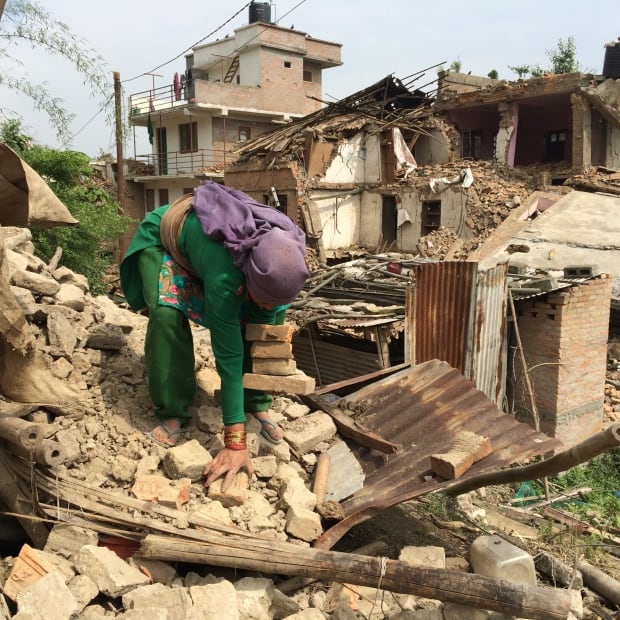 A resident of Lanagol village on the outskirts of Kathmandu picks up bricks where her house once stood in April 2015. More than a million homes were destroyed in the earthquake. Most of the houses in Lanagol, especially in the outlying regions, have not been rebuilt a year later. (Sylvia Thomson/CBC)

It’s not just the extreme mountaineers who are staying away from Nepal. Trekkers and tourists are staying away because they are concerned the temples and other popular sites are still lying in ruins.

“Our sales have gone down,” said Julien Passerini, the director of operations for Quebec adventure company Terra Ultima, which offers guided hiking and cultural trips to Nepal. 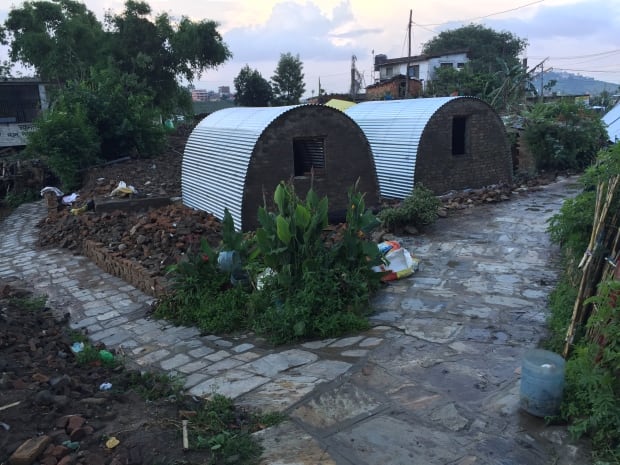 Lanagol residents have had to make do with temporary housing built out of corrugated metal and mud and brick while they wait for their houses to be rebuilt. Residents are frustrated that a year after the earthquake, money intended to fund rebuilding efforts has still not reached them. (Babu Maharjan)

“The interest was very low for our trips to Annapurna and the Everest region — maybe half of what it normally is.”

And for the group’s cultural trips to Kathmandu, the drop was even more substantial.

“People had the impression after the earthquake that everything was destroyed, but it wasn’t,” said Passerini.

Locals in Kathmandu say that many of the capital’s historic Durbar squares and temples, which were severely damaged in the 2015 quake, have been restored and are open to visitors.

But Atkins said that much of the city is “still a mess and will be for a long time because of bureaucracy.” 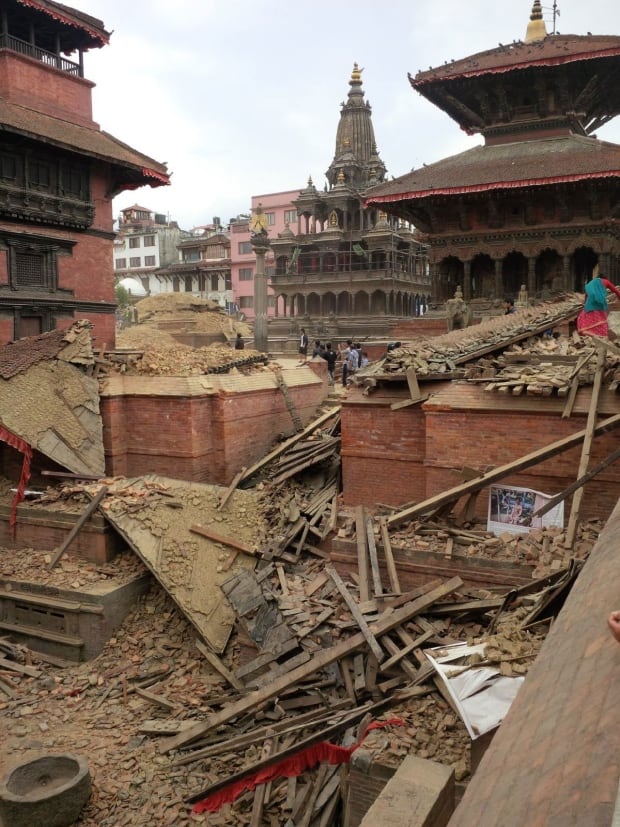 Rebuilding in Kathmandu has progressed faster than in outlying regions. Many of the capital’s historic Durbar squares that were destroyed in the quake have since been rebuilt, although much work remains to be done. (Kunda Dixit)

“The mountain people are getting on much better, but there are still clear signs of work all over,” he said.

Many Nepalese who had their homes destroyed last year still haven’t received the promised money for rebuilding from the government, and the Trekking Agencies’ Association of Nepal issued a press release earlier this month complaining that “government agencies were not implementing programs for revival of the tourism industry.” 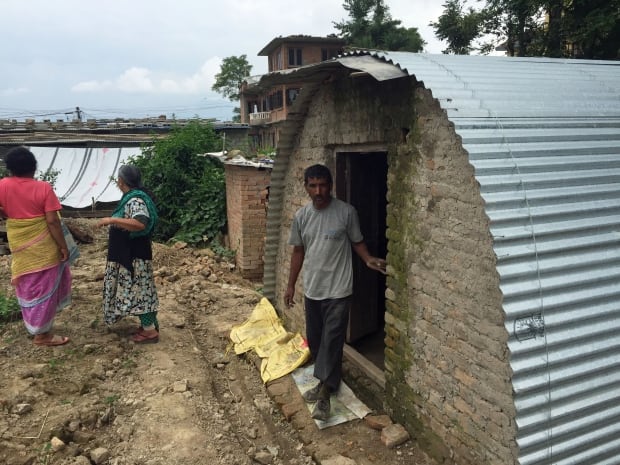 Lanagol resident Babu Maharjan said while funds from local and international organizations have helped families in his village build temporary housing, only one family so far has had enough money to begin rebuilding their permanent home. (Babu Maharjan)

The popular trekking areas, including the Khumbu-Everest region and the Annapurna circuit, are open for business, but there’s just not much business, Atkins said.

Passerini points out that since visitor numbers are down, it’s easier to access trails and lodges.

Passerini said the reduced tourist traffic means visitors can enjoy the scenery more, have better access to tourist and trekking sites and can help do some good by pumping money into Nepal’s struggling economy. 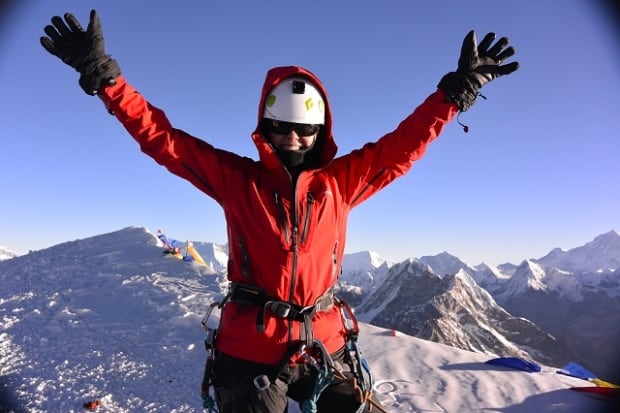 Southworth on Mera Peak in Nepal last October. She survived two avalanches on Everest and says those experiences won’t deter her from going back. ‘I have a very big love affair with the mountain and with Nepal,’ she said. (Coutresy of Melanie Southworth)

For his part, Raftis is now reconsidering his vow to never again climb Everest.

A year’s distance from the trauma of the avalanche has allowed the allure of conquering the highest peak in the world to regain its hold on his imagination.

In the year since the quake, he has helped the Sherpa who accompanied him on his 2015 climb with a cash donation to rebuild his home after the second earthquake hit Namche Bazaar last year, and he’s planning a meditation trip to Kathmandu.

“Everest is in the back of my mind, to go back there at some point,” he said last week. “Never say never.” 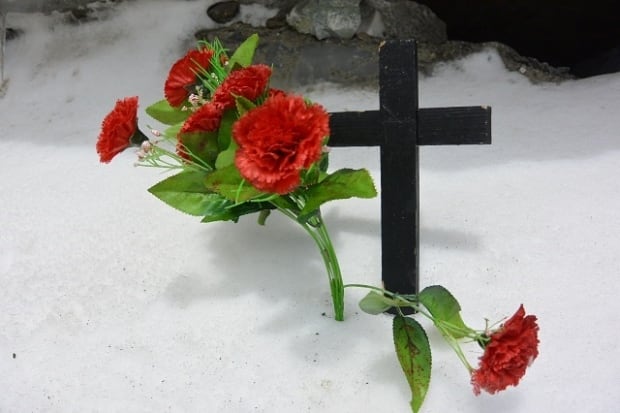 A cross marks the spot at base camp on Mount Everest where a woman was buried by the avalanche triggered by a 7.8 magnitude earthquake on April, 25, 2015. At least 18 people died on Everest that day. (Melanie Southworth)