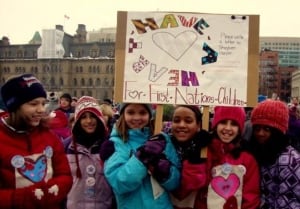 The photos made the rounds on social media and when I first saw one, I nearly spat out a mouthful of coffee. There was Prime Minister Justin Trudeau posing on a stage in a blazer, denim pants and a headdress. Expletives were part of my reaction.

Reading the print I saw that it was the Tsuut’ina First Nation, in Alberta, that bestowed the adornment on the national boss for — among other things — green-lighting the long awaited inquiry into missing and murdered indigenous women.

He made lots of nice-sounding promises during last year’s elongated federal election and many indigenous people bought in. The inquiry was one promise. Whether remaining promises come to fruition remains to be seen.

Let’s be clear on one point though. These are initial steps. This government is less than six months into its mandate. It hasn’t done anything yet. Announcements are great but they’re words, not actions.

‘One that has just started trying’

CBC reported that Tsuut’ina member Hal Eagletail, the event’s MC, said headdresses are only bestowed upon recipients the band believes will be warriors for them.

“We have the right to give this headdress to who we feel is worthy,” Eagletail said. “In our Tsuut’ina culture, when you’re elected leader, you’ve earned that right to receive the headdress, because you need to go do battle for us.”

The Dené of the Tsuut’ina First Nation may have the right to honour anyone they feel is worthy and that’s fine, but it doesn’t mean it’s in good judgment or in good taste.

They also gave him a name, Gumistiyi. It translates to “one that keeps trying.” I would modify it to “one that has just started trying” or “one that says the right things.”

Less than six months is not long enough to state that Mr. Trudeau has kept trying. He’s just getting started and I wish him well, but we’ll see.

He certainly hasn’t done anything to earn an eagle feather yet and definitely nothing to warrant the gifting of a headdress.

Yes, consultation over what the structure and scope of an inquiry into MMIW will look like is underway, but the inquiry itself isn’t. Once it is, and once it delves deeply and meaningfully into the Canadian psyche to churn up answers, and once it proposes solutions and implements them and indigenous women go missing or are murdered at a rate less than the Canadian average, then honour Mr. Trudeau.

When Shoal Lake 40 gets Freedom Road and a water treatment plant and when First Nations across the top half of Turtle Island no longer have to boil their water, then honour Mr. Trudeau. Not now.

Let’s hold off on any accolades until he and his government have actually accomplished something besides spewing nice words and playing Mr. Dressup. In my humble opinion, Trudeau looked ridiculous in the headdress. Rather than stately, his pose resembled that of a middle-aged Dsquared2 model.

The Kainai Nation, in Alberta, also gave a headdress to the previous prime minister in 2011. With even more face paint than Trudeau wore, Stephen Harper looked even more ridiculous, and I suppose that had to do with the context.

Children and youth gather at Parliament Hill for the annual youth-led Have a Heart Day in 2012, advocating for equal funding for First Nations kids. (First Nations Child and Family Caring Society)

But if so why, when Trudeau arrived at the casino (yeah, all this honouring took place in a casino), was there only one woman in a long line of more than a dozen local dignitaries there to greet the prime minister and shake his hand?

And what about the kids? On Jan. 26 the Human Rights Tribunal found Canada guilty of discriminating against children living on reserves by failing to provide them the same welfare services afforded to children everywhere else in Canada. The decision came with an order to stop the practice and Canada said it would not appeal. But since then nothing has happened. The government wants to study the issue first. This raises a red flag suggesting this government will be just like all its predecessors.

Quite frankly we’ve been studied to death. The reports of the Aboriginal Justice Inquiry and the Royal Commission on Aboriginal Peoples have been gathering dust for decades and the reports and findings from the Truth and Reconciliation Commission could suffer the same fate. If that turns out to be true, then “one that keeps trying” should change his name to “just like all the rest.”